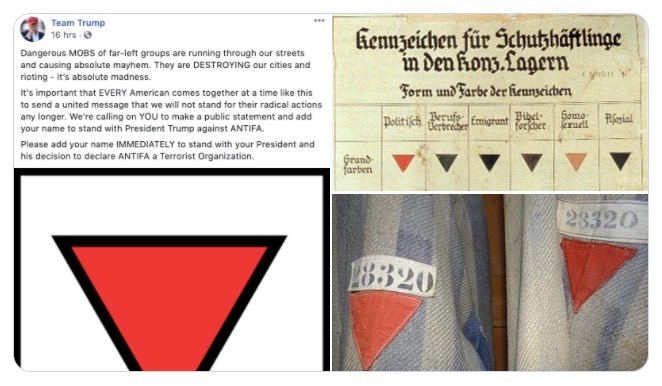 The symbol was a red triangle, which ran alongside ad copy that said, “Dangerous MOBS of far-left groups are running through our streets and causing absolute mayhem.”

According to the Times, the red triangle is "a symbol that Nazis used to identify Communists and other political prisoners in concentration camps, just as they used a pink triangle to identify people they labeled as homosexual."

The Auschwitz-Birkenau State Museum also weighed in on Twitter, noting that the red triangle was “the most common category of prisoners registered at the German Nazi #Auschwitz camp.”

Mark Bray, a historian at Rutgers and the author of “Antifa: The Anti-Fascist Handbook,” said that “the origin of the symbol is universally agreed to be with the Nazis and the concentration camps.” He added that the red triangle was not part of the symbolism of antifa in the United States.

The fact that the triangle has been reclaimed by some anti-fascists, Mr. Bray said, does not give the Trump campaign license to use the same symbol to attack antifa. “This is a symbol that represented the extermination of leftists,” he said. “It is a death threat against leftists. There’s no way around what that means historically.”

A red triangle that marked 'political prisoners' was the most common category of prisoners registered at the German Nazi #Auschwitz camp.

In August 1944, political prisoners constituted 95 percent of camp prisoners'. A letter inside the triangle could mark the nationality. pic.twitter.com/jBuNn0xmL1