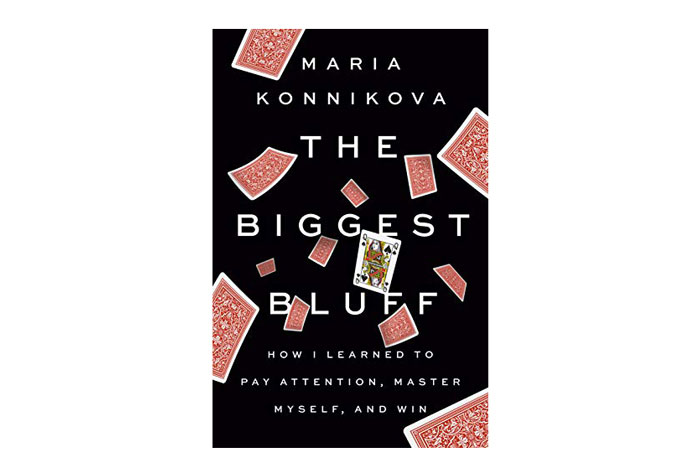 I'm almost finished reading Maria Konnikova's new book, The Biggest Bluff: How I Learned to Pay Attention, Master Myself, and Win.  It's an enthralling and funny first-hand account of her transition from a person who didn't know how many cards were in a deck into a professional, tournament-winning poker player.

Maria is one of my favorite nonfiction authors.I've interviewed her about her other two books, The Confidence Game: Why We Fall for It…Every Time and Mastermind: How to Think Like Sherlock Holmes, both of which I recommend highly.

The Atlantic has an excerpt from The Biggest Bluff:

I enter a $60 daily tournament at Bally's. It's small, only two tables' worth of players, but I feel a certain pride in watching the numbers dwindle to a single table, then eight, seven, six, until finally, I find myself in the final four. And it's hard for me to contain my excitement when I flop a set (three of a kind) of nines, an excellent hand if ever there were. There's a bet before me, and I joyously shove all my chips into the middle. This is it. All my learning is paying off. I will finally have my first tournament cash. I get called by a player who is hoping the dealer completes his flush, and to my horror, the flush hits. I'm out, and devastated.

I almost leave it all right then and there. This game is so damn unfair. But there's the knowledge, somewhere deep down, that it's to confront that very seeming unfairness that I turned to poker in the first place; I resolve to play on. I spend the next week playing day after day after day, taking conscientious notes, and talking them through with Erik. I'm a warrior, a storyteller, an explorer—not a lost minnow about to be eaten by the sharks. It's a mantra I repeat over and over, hoping that it will eventually stick.