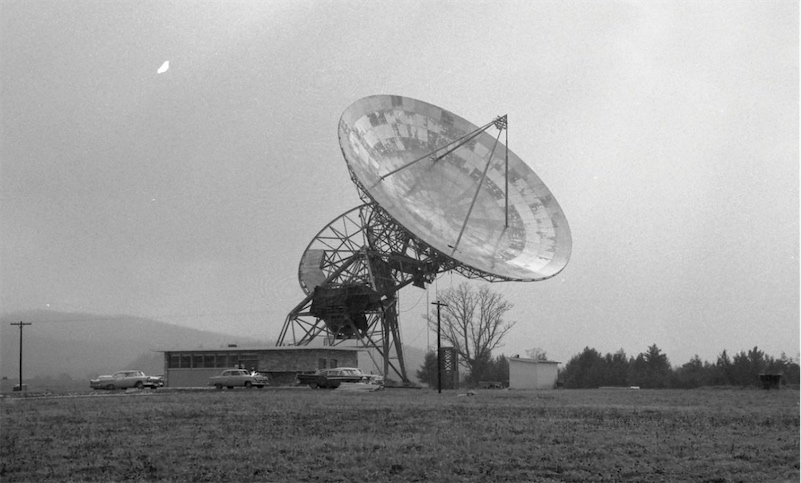 In 1960, Frank Drake, an astronomer at the National Radio Astronomy Observatory, launched Project Ozma, the first scientific effort to listen for radio communications from extraterrestrials. Frank, now 90, is still serious about SETI, writing research papers and advising scientists who are listening to the stars for signs of intelligent life. (I came to know Frank and his lovely and inspiring family while I was working on the vinyl reissue of the Voyager Golden Record; Frank was the technical director of the original Voyager Record in 1977!) In celebration of Father's Day, talented science journalist Nadia Drake (aka Frank's daughter), wrote in National Geographic about the history of her dad's Project Ozma and the current state of SETI. From National Geographic:

[Drake] designed an experiment to search for signals coming from worlds that could be orbiting the nearby stars Epsilon Eridani and Tau Ceti. He named the experiment Project Ozma, after the princess in L. Frank Baum’s Oz series—an homage to an adventure tale populated by exotic and unearthly beings.

Before sunrise on April 8, 1960, Drake climbed an 85-foot radio telescope in Green Bank, West Virginia, jammed himself inside a trash-can-size piece of equipment, and launched humanity’s first scientific search for extraterrestrial intelligence—now known as SETI. For three months the telescope scanned its targets and found nothing more than cosmic static. The stars were stubbornly quiet.

“That was a disappointment,” Dad told me a few years ago. “We’d hoped that, in fact, there were radio-transmitting civilizations around almost every star.”

Even though Ozma failed to find evidence of extraterrestrial technologies, the project was uniquely transformative—the first step toward solving a monumental mystery.

“For me, Ozma is a platform that points out to the world that, when compared to something else that might potentially be out there, we’re all the same,” says the SETI Institute’s Jill Tarter, one of the leading astronomers in the field. “That cosmic perspective is just critical to solving the challenges that we’re looking at.”

Ozma Records' Pesco scrying with the wonderful and inspiring Frank Drake, father of SETI and technical director of the Voyager Record. pic.twitter.com/KkhXmTaehl