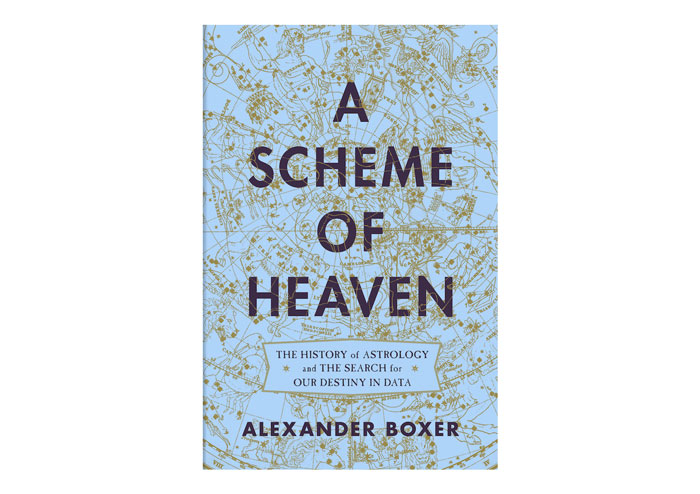 We humans are castaways on an ocean of uncertainty. Since the beginnings of history, our ancestors sought knowledge and understanding about their lives, their relationship with the cosmos, and perhaps take a peek into their future. In such effort—long before the answers of science—earthlings developed a rich variety of divination practices and systems. Many forms of divination survive to this day, and can't be easily dismissed as irrational nonsense, or mere curiosities of a bygone age. On the contrary, divination seems to be essential to culture.

So much so, that perhaps our modern obsessions with predictive algorithms and numerical forecasts are best understood as a continuation of this ancient divinatory impulse. This is the provocative thesis of Alexander Boxer’s fascinating new book, A Scheme of Heaven: The History of Astrology and the Search for Our Destiny in Data.

A Scheme of Heaven

Astrology is indeed the most historically relevant of all divination practices, its aim having been nothing short of a systematic account linking the nature of the heavens to our own human nature. Across civilizations, human beings have proven to be superb stargazers. Entranced by heavenly patterns and periodicities—through sheer naked-eye observation—our ancestors were able to crack with uncanny precision the workings of the cosmos. Exact geometric relationships and precise mathematical elegance spoke of divine design and transcendent beauty.

For a long time, astronomy and astrology were one and the same magical “enterprise.” Alexander Boxer, a data scientist, whose eclectic erudition includes a PhD. in physics from MIT and degrees in the history of science and classics writes:

“Astrology was the ancient world’s most ambitious applied mathematics problem, a grand data-analysis enterprise sustained for centuries by some of history’s most brilliant minds, from Ptolemy to al-Kindi to Kepler.”

In examining how ancient astrologers looked for correlations and extracted insights from vast quantities of raw, celestial data, A Scheme of Heaven throws a mirror at ourselves and our inescapable fascination with using numbers to predict the future. Astrology’s survival through the ages is a testament to a timeless seduction for seeing patterns in data, a seduction still very much alive and kicking. According to Boxer:

“Astrologers were the quants and data scientists of their day, and those of us who are enthusiastic about the promise of numerical data to unlock the secrets of ourselves and   our world would do well simply to acknowledge that others have come this way before.”

Boxer's deep investigation of astrology from a scientist’s perspective introduces an unsettling question: Why is astrology considered unscientific, while economics—which also uses complex mathematical formulas to 'predict' the future—is regarded as a perfectly respectable field of study, despite its many failed forecasts? With the neutrality of statistical science, Boxer shows that today’s sophisticated models are, embarrassingly, often no better at predicting the future than the algorithms of astrology. Just think back to the 2008 housing crisis, the 2016 election, or, indeed, the wildly divergent, if not contradictory forecasts for the spread of COVID-19.

Mathematical models can appear to offer the solidity of a mathematical proof. We tend to believe in numbers: they offer “certainty” to our rational minds. But numbers still mislead, figures still deceive, and predictions still fail—sometimes spectacularly so. Put it differently, here's the uncomfortable truth. Many modern disciplines that advertise themselves as purely rational (and especially those that rely heavily on numerical forecasting), actually contain elements from the domain of the magical, even if they don't realize it or are unwilling to admit it.

Our modern forms of divination—based on AI and big data, with “corporate astrologers” dressed in suits—offer little from a purely rational perspective, given that their track records are hardly any better than astrology. Yet we are drawn to these forecasts. Evidently, there are deeper forces at play. Perhaps these modern forecasts, with their own peculiar esoteric symbols and mysterious jargon, serve to satisfy an essentially magical, divinatory need. Understanding this explains, in part, why astrology continues to thrive (despite every effort to eradicate it) alongside its modern, data-driven successors.

“And thence we came forth to see again the stars”

Divination systems are sensemaking tools, which continue to fascinate, enchant, and nourish an archetypal need. Among these, astrology is the ur-example: a narrative art form of weaving stories out of numbers and data points.

For anyone interested in the history, and, indeed, the future of these ideas, A Scheme of Heaven is a deeply learned guide. Filled with fun charts, diagrams, and statistical tables, Boxer clearly explains the richly complex language and “science” of astrology in a refreshingly, readable manner. With its light touch and wonder-seeking tone, the book is a beacon shone onto the mysteries of the cosmos, rekindling our timeless capacity to marvel at the universe.