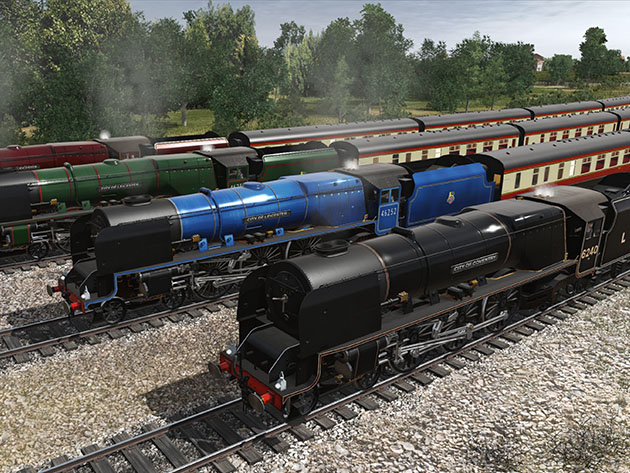 There’s always been something romantic about train travel. Whether it’s the connection to a bygone age or just the slower pace of life on the rails, the reassuring click of those steel wheels gliding over mile after mile of track through both cities and countrysides offers a warm and true taste of the complete world around you.

Whether you’re a driver or a world-builder, the Trainz Railroad Simulator Platinum Edition Bundle offers you the chance to live out your locomotive fantasies.

If you’ve never tried a Trainz game before, they’ve been a premier train simulator for nearly 20 years — and with the Trainz Railroad Simulator 2019 edition, they’ve continued to add to the realism of both train operations as well as crafting a photo-realistic world outside the train windows.

Once you get the controls down, you can drive one of nearly 200 different steam, diesel and electric powered locomotives along hundreds of miles of track laid out along six meticulously cultivated routes.

While there’s plenty to see and do while wearing the conductor’s hat, your true mettle as a railroad legend will be tested in the Surveyor world-building, where you can build literally any railway system you can dream up.

You contour the land, you build the train tracks and you populate the environment around that train with up to 21,000 different buildings, cars, animals, trees, and more along hundreds of miles of virtual track. From building your own route to modifying one of the thousands available for free in the Trainz Download Station, everything is entirely up to you.

In addition to the game, buyers also get some fun Platinum Edition extras, including three additional courses only available there as well as 10 more tricked-out locomotives you can control.

And if you truly want to play in God mode, you can actually launch multiple trains on multiple routes and run them like an actual railyard, with AI-controlled engines running operations so you can check in via onboard cameras at any time. Whether you’re playing solo or with others in the multiplayer mode, you can show off your mastery of leisurely transportation.

The package with both TRS 2019 World Edition and the expanded Platinum Edition pack usually costs $279, but right now, it’s 85 percent off at just $39.99.