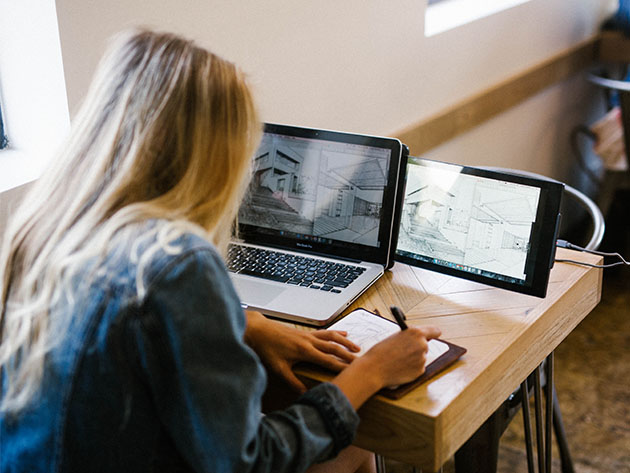 Whether you’re working from home or working from the office, a few elements of the grind are universal. Emails never stop. Meetings go on way too long. And a bad monitor makes your day monumentally more difficult to tolerate.

Staring at a screen that’s too small or isn’t bright or sharp enough can be enough to make you want to chuck the whole computer out the window. But before you start inflicting property damage and completely deep-six your productivity, check out a handful of monitors now on sale that might just soothe your nerves.

After stepping up to this 1600x900 HD resolution image with crisp detailing, sharp contrast and bright vivid colors, you’ll wonder why you waited so long. You also won’t have to deal with video blur or ghosting issues with this model’s speedy 5ms response time. AOC also allows you to feed in video playback from hundreds of other devices through its standard VGA and HDMI connections, offering top quality video and audio signal for your viewing. There’s even a LowBlue Mode that cuts down on potentially harmful blue light by controlling color temperature without compromising the monitor’s naturally vivid colors.

This certified refurbished monitor has also been thoroughly tested and vetted to look and run as good as new, which means you get a monitor that originally sold for a lot more at a fraction of the price.

As one of the industry leaders, HP has not one, but three different monitors of varying sizes to fit any particular home setup. All sport crisp, clear 1920x1080 full HD resolution while ensuring virtually seamless dual-display views with the 3-sided micro-edge bezels. With anywhere from six to 10 input ports, you can network together almost all of your devices seamlessly in a tightly compact footprint offering four-way adjustability to fit your optimal viewing position in any setting. There’s also an integrated privacy screen to help shield any sensitive content from prying eyes.

If your primary device is a laptop, the DUEX is how the remote worker replicates the productivity of the office dual monitor setup with ruthless efficiency. Backed by over $1 million of Indiegogo funding, the DUEX attaches to the back of your laptop monitor and slides out for a perfectly synchronized HD-capable second screen experience. In addition to allowing for efficient multitasking, you can also turn the DUEX around 180 degrees and use it as the perfect display for group or business presentations.