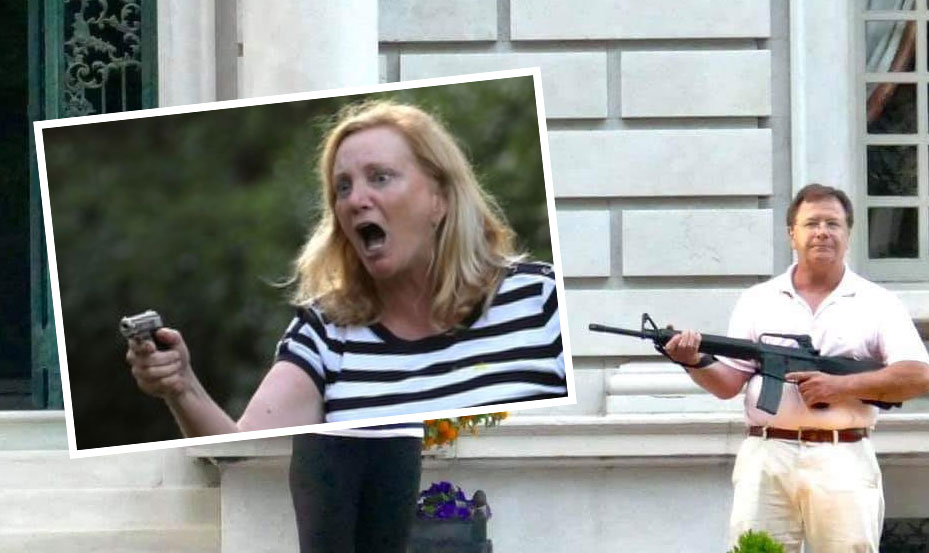 On Sunday, June 29, 2020, a crazed St. Louis couple quickly became a viral shame-sation for waving guns at protestors outside of their McMansion (in violation of every standard best practice of gun ownership; seriously, if either one of them had actually pulled the trigger, they would have ended up with a black eye and a friendly fire injury). The couple in question, Mark and Patricia McCloskey, are personal injury lawyers, and despite the fact that no one's accusing them of any crime besides being total assholes, they've still hired an attorney to make public statements for them.

And here's what that lawyer, Albert Watkins, had said:

My clients, as melanin-deficient human beings, are completely respectful of the message Black Lives Matter needs to get out, especially to whites … (but) two individuals exhibited such force and violence destroying a century-plus old wrought iron gate, ripping and twisting the wrought iron that was connected to a rock foundation, and then proceeded to charge at and toward and speak threateningly to Mr. and Mrs. McCloskey.

It's true that the McCloskeys live on a private street and claim that their wrought iron fence was destroyed by protestors. I'm not sure what they plan to do about it, or why their lawyer felt the need to include that comment about their melanin deficiency, especially given the other claims he makes in his professional bio:

Self-centered, egotistical, and a self-proclaimed expert in all matters, Watkins is unabashed about bringing to the public eye the irreconcilable nature of a position taken by an adversary in a case.

Watkins is apparently quite proud of making sure that people of color don't get ahead in life. But wait it gets better:

When the Obama mask wearing rodeo clown appeared at a state fair in Missouri and garnered international attention for making racist comments, a school district superintendent announcing the rodeo was erroneously named as the maker of the offending comments. Watkins not only reversed a global media error in attribution, including front page clarification in the Habana, Cuba state owned paper, but he brought to the fore the counterintuitive prioritization by the media of inconsequential minutia while the world erupts around them.

There's a lot going on there. But yes, okay, great, he defended his clients' reputation in … Cuba?

But this might be his most egregious boast (emphasis added):

In Hammon v. Harris, Watkins garnered the first verdict of its kind against a young female who falsely accused a policeman of engaging in sexual relations and snorting cocaine with a female patron of a restaurant at which the policeman was working a security shift. When the defendant would not appear for her deposition, Watkins procured an order mandating the woman be brought into custody and held in jail pending her deposition. During the ensuing video deposition, Watkins swiftly got the woman to confess and admit the allegations were false. The video deposition swiftly became an internet sensation. A six-figure judgment was entered in favor of the policeman. The woman committed suicide thereafter.

Look, I know that sometimes lawyers have to defend even the shittiest of clients. But this guy's bio cackles with evil glee at the idea of punishing women and people of color for daring to threaten his precious social order. I don't know why the McCloskeys have chosen to retain his counsel as long as they're getting meme-ified, but I really don't think he's going to improve their tarnished reputations.