Here's the everyday-carry for Australian cyberspies in China 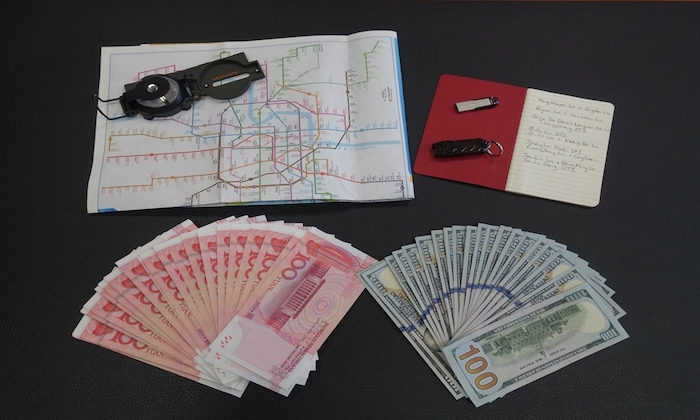 Chinese newspaper Global Times reports that "Australia is waging an intensifying espionage offensive against China – sending agents to China to spy, gather intelligence and recruit assets, instigating defection among Chinese nationals, spying on Chinese students and organizations in Australia, feeding fake news to media to hype up the 'China espionage theory' and even in early years attempting to install wiretaps in the Chinese Embassy in Canberra, the Global Times has learned from a source with a Chinese law-enforcement agency.

The paper even has photos of the tools used by the Downunder spies to ply their nefarious trade: "espionage equipment, US dollars and Chinese yuan used for espionage funds, and the intelligence information they were going to exchange."

Nothing Q-like at all. Disappointing!

Need some last-minute advice to make a costume so good, no one will recognize you? Check out these 5 tips to remain incognito this #Halloween with the help of our spy dog, Calliope.https://t.co/JZNiqiU9kN#SpyKids pic.twitter.com/1F8Zc6ihzq — CIA (@CIA) October 28, 2019 I don't think I ever related to the White Guy Blinking Meme as much as […]

When Edward Snowden flew to Hong Kong with thumb-drives full of damning US government documents, he assumed his freedom was forfeit: he didn't even make an escape plan.