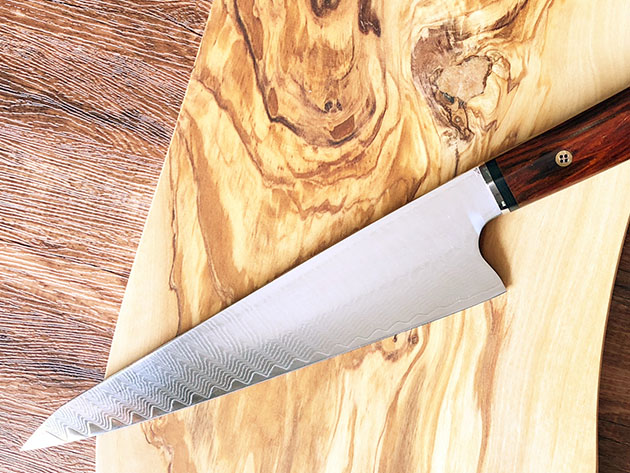 "I probably use my chef's knives more than any other tool in the kitchen." – Bobby Flay, celebrity chef

Cooking at home has taken on a whole new life in the wake of COVID-19, and even with restaurants slowly reopening across the US, there's heavy reason to suspect that more of us preparing more meals in our own kitchens is a trend that will continue. In fact, almost 60 percent of respondents in a recent survey said they were making more home-cooked meals these days, with nearly half saying they'll be spending less on food prepared outside the house going forward.

Which brings us back to the most important weapon in any cook's arsenal, the versatile chef's knife. That functional blade is used in the creation of virtually any dish you can imagine, with its clean, sharp slice offering increased control when you cut. You can find out the impact of a quality chef's knife on your culinary adventures with a Zen Series 8-inch Japanese Style Chef's Knife.

The chef's knife is such a staple because it handles virtually anything in the kitchen. From fine mincing to precise slicing and chopping of vegetables, to slicing meat, and brute force jobs like disjointing large cuts, a blade-like this Zen Series model is an absolute go-to.

Surrounded by 66 layers of SUS410 steel for excellent corrosion resistance plus high strength and hardness, this Zen knife is forged Damascus steel, valued for its keen edge while retaining its flexibility. Sporting a 60+ Rockwell hardness and 16-degree hand-finished edge per side for razor-like sharpness, this knife will last for years of kitchen duty if it receives proper care.

Meanwhile, the natural wood handle features an ergonomic design that slides smoothly and fits comfortably in the hand.

With its durable sandblasted finish, perfect balance, and expertly-sharpened blade, the Zen Series Chef's Knife may well become the only serious knife you use during meal prep.