America set to be nuked, anarchy in the US, and the men who knew too much, in this week's dubious tabloids 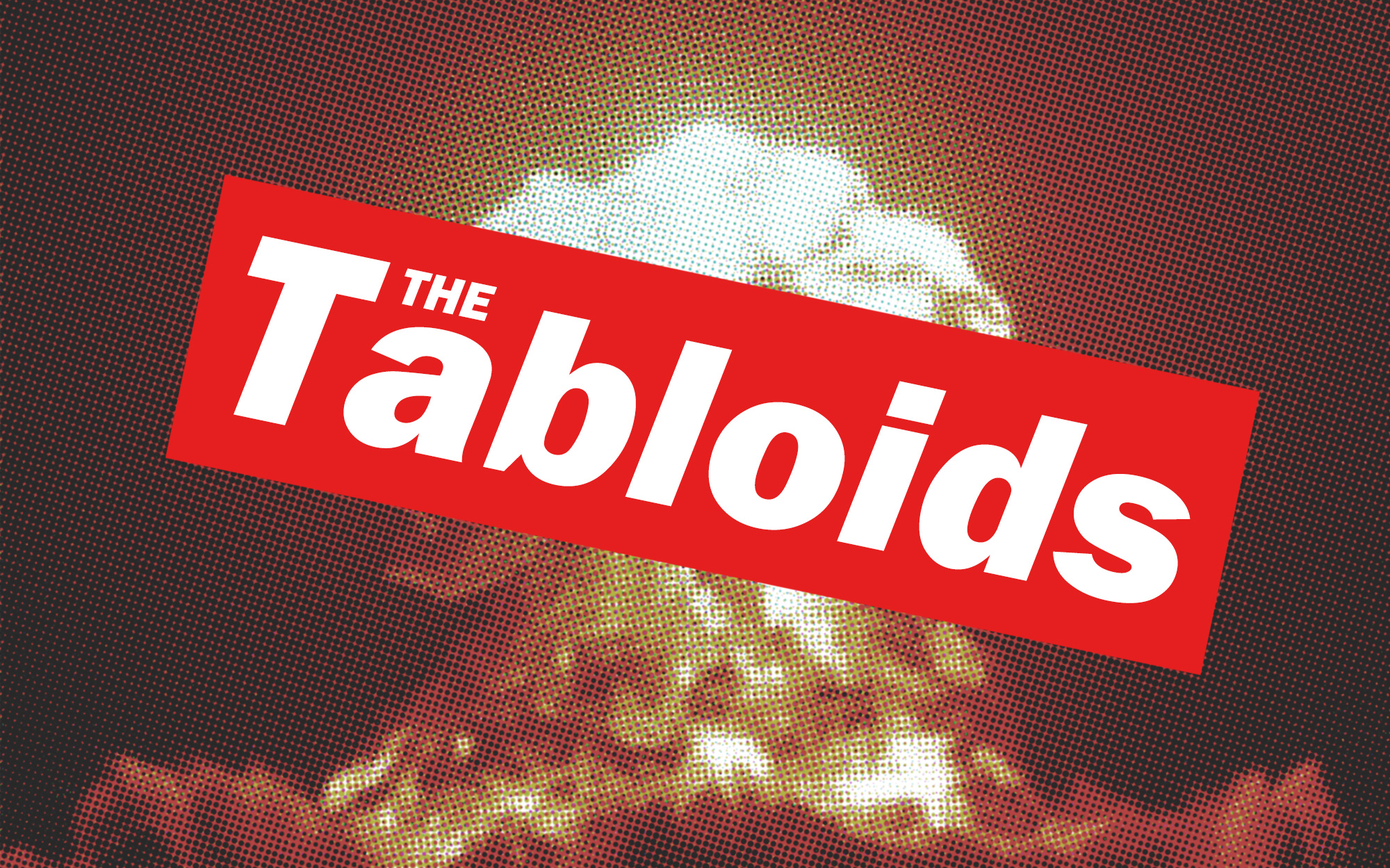 In recent weeks we have seen Prince Andrew allegedly hunted by assassins because he knows too much about pedophile billionaire Jeffrey Epstein's wealthy and famous sex ring conspirators.

Epstein himself was supposedly murdered in jail while awaiting trial because "he knew too much."

China's ambassador to Israel Du Wei was supposedly murdered because "he "knew too much" about the alleged bioweapon origins of coronavirus.

And this week the 'National Enquirer' cover claims: "Movie Mogul Murdered in Epstein Cover-Up! Steve Bing knew too much!"

The millionaire playboy who produced films including 'The Polar Express' and 'Get Carter' died after a fall from the 27th floor of his Los Angeles apartment, and left behind two suicide notes just to make perfectly clear that he took his own life.

But that doesn't stop the 'Enquirer' from claiming that Bing was murdered, simply because he was one of Epstein's hundreds of "friends."

Everyone who's anyone, it seems, was in Epstein's little black book, except his "close friend" Steve Bing.

The 'Enquirer' clearly struggles with figuring out the logistics of its story, beginning with motivation for the supposed murder.

Bing – full disclosure: I met him several times and always found him charming and polite – was allegedly killed because he "had gone to the FBI" after becoming involved with Epstein, claims the 'Enquirer.' In which case he had already spilled the beans.

Are we to assume that several FBI agents now know too much, and might want to start looking over their shoulders?

The 'Enquirer' can't quite figure out how to get past the coroner's suicide ruling or those two suicide notes, so it turns to rent-a-quote ex-con "disgraced financier Steven Hoffenberg" – who has no reason to know anything about Bing's death – to opine: "It's suicide – but an assisted suicide. Somebody murdered him." It makes perfect sense once it's explained by an expert.

Did you hear that America is about to be hit with an atomic bomb?

Maybe you should read the tabloids more closely.

This six paragraph story about Kim Yo-Jong – who the tabloids believe has taken control of North Korea after replacing her dead brother with a body double – is nicely tucked away at the bottom of page 19, right where you'd expect to find cataclysmic news of America's imminent destruction.

The 'Globe,' recognizing real danger when it sees it, devotes its cover to "America In Anarchy!"

Sadly it's not a new release from the Sex Pistols, but refers instead to the roughly five square blocks of Seattle that have been declared a police-free autonomous zone by protesters.

The 'Enquirer,' which could never be accused of knowing too much, writes that this "has put America on the road to total anarchy and threatens to shatter national security."

Just imagine how bad it would be if the CHAZ was six square blocks.

Seattle's alleged slide into anarchy combined with any large-scale protests planned for Independence Day have supposedly provided "cover for terrorists to launch a horrific strike on a scale worse than 9/11."

But that's always been true of any large gathering: a traditional July 4th fireworks party, a street parade, a park filled with picnicking families – any soft target would suffice.

As for Seattle's CHAZ or any Independence Day marches planned to protest racism and police brutality, they are more likely to be targeted by All-American tabloid-loving racist white supremacists than by Al Qaeda.

Back in the surreal world, the 'Enquirer' brings us yet another episode of the Royal soap opera, complete with dialogue that wouldn't even pass muster in the writers room of 'The Bold and the Beautiful.'

The tabloids seem to believe that the British Royal family only talk in the dialogue of soap divas clawing at each others' hair and eyes.

"You were always the golden boy," Harry allegedly yelled at William. "Mom loved you more than me!"

Harry "hissed" at William: "Drop dead! You don't care what happens to me!"

Behind the report is tabloid psychobabble at its most uninspired: Harry allegedly always felt unwanted by his parents and secondary to his brother, the "spare" to the heir.

After William had children, pushing his brother way down the line of Royal succession, Harry "basically felt he was not needed anymore," according to a "source close to the family."

And when William threw cold water on Harry's romance with Meghan Markle, "that was the last straw for Harry."

As sands through the Royal hourglass are the days of our lives . . .

The 'Enquirer' really seems to be scraping underneath the bottom of the barrel to dig up what passes for stories this week.

But no, he hasn't suffered a mental breakdown. He simply stepped out of his car with his sweatpants pulled down slightly at the back to expose the top of his backside. Or as the rag puts it, "his massive meat cheeks."

"Reese and Gwynnie in Kitchen Catfight!" is yet another 'Enquirer' headline with a slender grasp on reality.

Actress Reese Witherspoon allegedly wants to extend her lifestyle brand into kitchenware, and as we all supposedly know, only Gwyneth Paltrow is allowed to do that.

In its biggest leap of the imagination, the 'Enquirer' reports: "Uh'Oh-7 – Pierce Brosnan Breast Tumor Nightmare!"

The former 007 star was photographed shirtless on a beach,allegedly displaying a faded mark below his left breast.

A doctor who has never treated Brosnan, and who quite possibly has never seen Brosnan in a single movie, declares that the purported scars "resemble" breast tumor excisions. Presumably because that's the only reason one could ever have a faint mark on one's chest. Can't argue with medical science.

The tabloids can't let a week go by without mentioning warring exes Brad Pitt and Angelina Jolie – even when the pair are playing nice.

"Brad and Angie Agree: Our Kids Ain't Too Cool For School!" reports the 'Enquirer.' Pitt and Jolie allegedly plan to send their children to elite private schools in Los Angeles after a lifetime of home-schooling.

The concept that the duo could agree on anything is radical enough for the tabloids, but the 'Globe' goes a step further, reporting on "Brad & Angie's Family Vacation!"

The couple who only last week were supposedly at each others' throats are now allegedly planning a family trip together with their children.

Of course, this is a win-win situation for the 'Globe.' Either Brad and Angie take their highly unlikely vacation together, or it doesn't happen and the tabloids can gleefully gloat that a new rift has exploded between them.

'Us' magazine dedicates its cover to singers Blake Shelton and Gwen Stefani's "Wedding countdown," breathlessly revealing details of the "handpicked rings," the "top-secret guest list," and the couple's spending of "$10 million on two ceremonies, in L.A. & Oklahoma." "It's going to be the party of the year," says the cover, quoting . . . absolutely nobody. You won't find that quote anywhere in the article. If you can't get anyone to say it, just make it up.

'People' gives up its cover to a real-life mystery on a tropical isle: "Murder in Paradise? 2 Husbands Dead – Wives Questioned." As you'd expect, it's a lot of questions without many answers.

Fortunately we have the crack investigative team at 'Us' mag to tell us that Tessa Thompson wore it best, that actor Neal McDonough eats "peanut butter and raspberry jam on toast every morning," and that the stars are just like us: they buy groceries, cook, and go to the dentist. Oh, those wacky celebrities.

Proving that even accurate statistics can be 100 per cent misleading, the 'Globe' claims that "It's easier to get into Harvard than snag a job at Walmart!" Rather belatedly reporting on a 2013 incident, the rag relates that 23,000 people applied for only 600 jobs at a Walmart in Washington D.C. – a 2.6 per cent acceptance rate, whereas Harvard reportedly admits around 5 per cent of applicants. The story fails to mention that had those 23,000 Walmart job-hunters applied to Harvard, they might have had a near-zero per cent admission rate.

Maybe they'd have better luck applying for a less challenging job that Walmart, like being a reporter on the 'Globe.'

China's secret war on America, a Fox News sex scandal, and a space-time wormhole in this week's dubious tabloids

Expect to see 'National Enquirer' readers driving around in Rolls Royces and hopping private jets to their private islands.

The marriage from hell, Epstein's sex tapes, and overweight celebrities in this week's fact-challenged tabloids