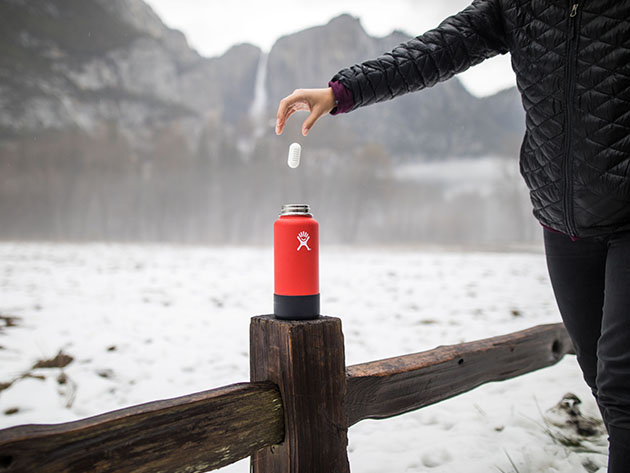 There was already enough concern about the healthy state of our drinking water before COVID-19. And while there's no evidence that the coronavirus has ever been detected in the water supply, the general sense of fear surrounding any type of contamination is obviously at a fever pitch everywhere.

Contaminants like lead, chromium, arsenic, copper, mercury, chlorine, and fluoride show up in water systems all the time. That's a nightmare no one wants to endure, which is why creations like the GOpure Pod Water Purifier are being embraced by health-conscious men and women everywhere.

Unlike faucet filters or filtration pitchers, the GOpure is billed as the smallest, most convenient portable water purifier on the planet. Less than five inches long, the pod can be dropped into any glass, water bottle, pitcher or other containers of water — and the device acts like a magnet, attracting and neutralizing all the pollutants that can be found in typical drinking water.

The revolutionary technology inside the pod is an advanced core made of diatomaceous earth and trace silver that attracts, binds and absorbs heavy metals, bacteria, impure or inorganic chemicals and everything else that can foul your water. It even leeches any properties that affect the taste and smell of the water as well.

Of course, it's not all about subtraction. The GOpure also adds back important minerals and raises the pH level to 7.4, considered to be a perfectly safe drinking experience.

Each pod filters the equivalent of 2,000 single-use plastic water bottles. Just rinse the pod under cold water for 10 seconds, drop it in — and you're good to drink. So not only are you drinking cleaner, healthier water, but you're also cutting down on the number of plastic bottles that end up clogging the world's landfills.

Available in packs of two, the GOpure Pod Water Purifier is usually priced at $49.99, but right now, you can save 25 percent and get a two-pack for just $36.99.