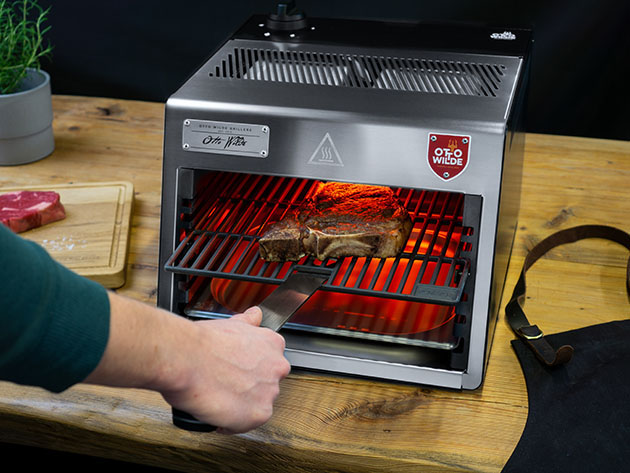 With all due respect to our vegetarian friends, there might be nothing more intrinsically linked to the 4th of July holiday than a big ole cookout. Sure, fireworks and celebrating the birth of a constitutional republic are great too, but showing off your cooking prowess with a brilliantly seared, mouth-watering slab of grade-A American beef is the true measure of a peak summer holiday.

Of course, cooking perfection doesn't happen without the right tools — and right now, a July 4th sale is shaving hundreds off the price of one of the hottest steak grills on the market today, the Otto Lite 1,500°F Professional Steak Grill.

The real secret to the stainless steel Otto Lite isn't really a secret at all: it's this unit's extreme heat. Unlike most barbeques that aren't capable of hitting the extreme temperatures needed, the Otto Lite fires up to an insanely hot 1,500°F in just three minutes.

With the Otto Lite's blistering, radiant heat distribution technology, you can sear a steak quickly to give it a delicious, flavor-sealing crust while your meat remains tender on the inside. That means depending on the size of your cut, you can go from sparking the grill to finished, plated meals in less than 10 minutes.

The Otto Lite also brings some versatility with its game, featuring six slide-in slots allowing safe height adjustment of the grate; as well as two simultaneously controlled radiant infra-red burners so you can dial in the ideal temperature for your meat. Meanwhile, the gas-powered over-fire ceramic burners are fuel-efficient and cook from above, preventing flare-ups and also allow independent control so you can cook steak, meat, fish, or even pizza flawlessly.

Retailing for $899, the Otto Lite Professional Steak Grill is currently $200 off, bringing the price down to only $699. But you can also use the code JULYFOURTH20 during checkout to knock an additional 20 percent off your total, putting an elite-level steak grill in your backyard for just $559.20.