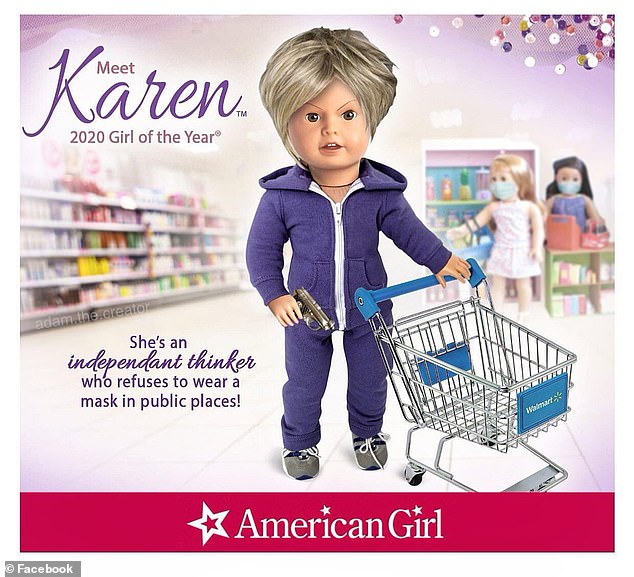 Today's serving of the Streisand Effect comes courtesy of American Girl, which hopes that no-one will see Adam the Creator's "Karen" parody of its dolls.

"We were informed of this post a few days ago and are working with the appropriate teams at American Girl to ensure this copyright violation is handled appropriately," the company posted on Twitter.

The mock advertisement depicts an American Girl doll as "an independent thinker who refuses to wear a mask in public", waving a handgun at other shoppers and sporting the blonde wedged bob de riguer of the stereotype.

In another comment, American Girl said it was "disgusted" by Adam's parody.

Unfortunately for American Girl, parody is a classic example of fair use under copyright, meaning that it is unlikely that it would prevail against the "Karen" parodist were it ever to come to legal action.

That said, copyright claims often form the heart of nuisance legal actions whose only purpose is to become costly and tiresome for the target, forcing them to take it down anyway. Social media companies are servile to corporate requests to remove postings for similar reasons; DMCA takedown requests are typically honored mechanically.

In this case, the difference between parody and satire might come into play too, as it has in several high-profile copyright cases over the years.

American Girl could also claim a trademark violation, but the bar there is even higher, requiring owners to prove that a reasonable person would be confused by the parody or that it would dilute the value of the trademark itself: "courts have [lately] been far more sympathetic to third parties creating parodies of famous trademarks and service marks."

And this Karen has already gotten quite out of hand.

UPDATE: American Girl saw the light: "American Girl has no intention of censoring this parody meme and anything shared to the contrary was in error. We apologize for any misunderstanding."

American Girl has no intention of censoring this parody meme and anything shared to the contrary was in error. We apologize for any misunderstanding.