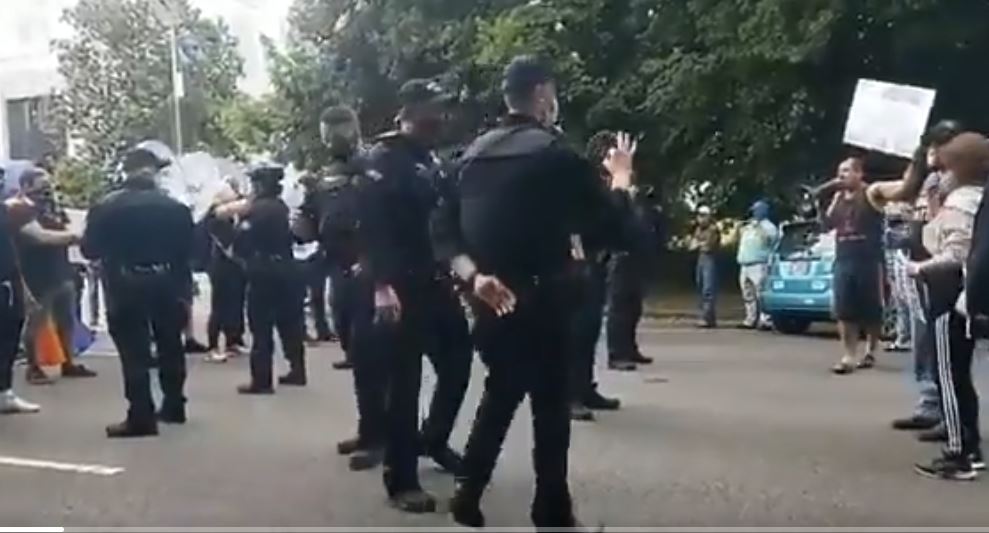 Oregon State Police said Monday that an officer who flashed the "OK" hand symbol at a far-right protestor did nothing wrong. The cop was filmed making the gesture as he approached the man, who slapped him chummily on the shoulder in response, during a protest in Salem, Oregon.

An interaction between a cop and a Proud Boy in Salem, Oregon today.

The OK gesture was appropriated by far-right figures and white supremacists as a plausibly-deniable way to signal shared sympathies, but isn't quite as subtle as they think. Even the NYPD placed one officer under internal review for using the gesture on duty.

The Oregon State Police officer was cleared of fault without much ado.

The Oregon State Police said the trooper used his hands because he was wearing a face covering and working in a noisy environment.

“Best available evidence indicates the trooper was simply checking on the man's status and used the universal signal to signify this inquiry, which the man gestured he was — then patted this trooper and a second trooper on their shoulders in an apparent signal of appreciation,” police said.

Fingers spread to form a conspicuous "W" (over the "P" formed by the forefinger and thumb) can specify its use as a white power symbol, according to the Southern Policy Law Center. Media commentators have claimed it is a harmless form of trolling or ironic racism intended to mock anti-racism campaigners. MSN reports that the gesture was in wide use at the gathering this weekend.

The Oregon State Police is 93% white, according to The Oregonian.

Witnesses at the protest reported seeing counter-protesters, believed to be associated with the Proud Boys, a hate group according to the Southern Poverty Law Center, flash the sign throughout the protest. Other far-right groups were counter-protesting as well.

Last week, an Oregon state trooper was put on leave after video showed him using profanity after being asked inside a coffee shop to follow the state’s mask mandate.