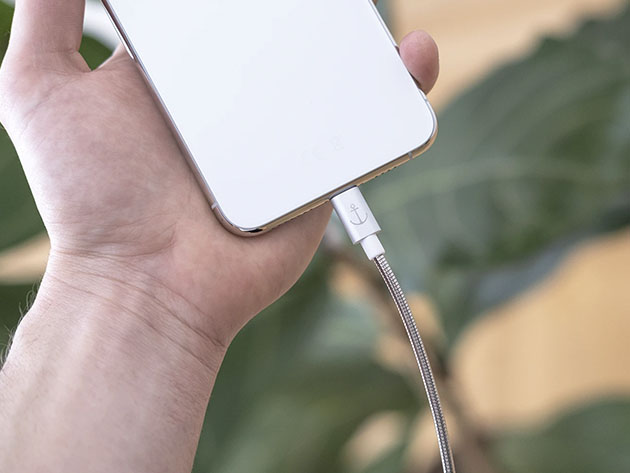 A guy on the Apple discussion forum started a thread titled, “Why do your Charger Cables have the lifespan of a housefly?” That question is probably enough to elicit a whole bunch of head nods from virtually everyone reading this, whether you’re an iPhone user, an Android owner or have virtually any device that needs charging.

Unfortunately, the guy made this astute observation back in the pre-Mesozoic era of 2014 — and the state of most charging and sync cables haven’t changed much since then.

However, at least a few manufacturers are fighting the good fight and trying to create cables that aren’t circling the trash can within 30 days. One of those firms is Anchor Labs, maker of the Evercable ($15.95 for USB-C version; $18.95 for the Lightning version), which makes the bold declaration of being “the world’s strongest phone cable.”

We’re certainly not about to debate them, because the Evercable is built like a tank. Encased in tough, yet pliable stainless steel, the Evercable is non-magnetic and field-tested like a soldier in a hot battlefield. After more than 60,000 bends, the Evercable was still up for the job and serving up power.

Of course, its sturdiness doesn’t really matter if it doesn’t deliver the goods. However, the Evercable is more than up to the challenge, besting comparable cables from competitors for higher charging rates and data-read speeds between your devices.

Not to be outdone by three-foot cable, the Evercable even clocks in at a generous 4.35 feet, granting just that added bit of reach that can make all the difference between your phone resting comfortably during its charge or perched somewhere dangerous and tempting disaster.

The Evercable is supposed to last a lifetime — and both Apple and Android users can get in on this offer now. The iPhone and iPad Lightning-compatible cable regularly priced at $22.95 is now $4 off at just $18.95. And Android fans can get the USB-C compatible version for 20 percent off, only $15.95.