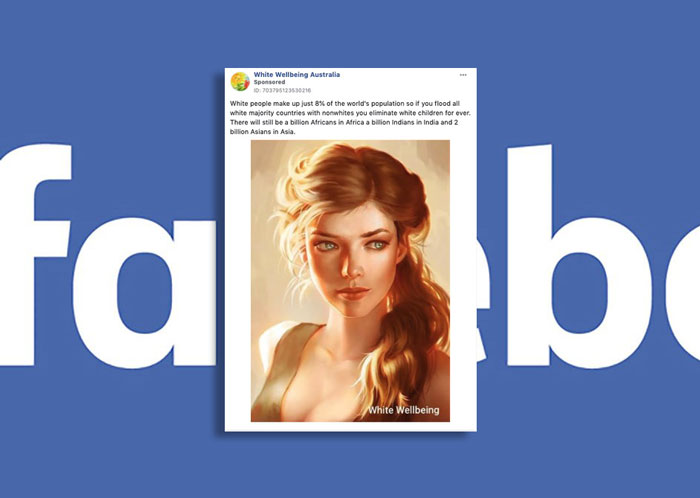 At the same time Facebook's billionaire chief operating officer Sheryl Sandberg was writing a post on her personal page that Facebook "stands firmly against hate," her company was taking money from a white nationalist group running an ad on the social media platform, reports Buzzfeed News.

"White people make up just 8% of the world's population so if you flood all white majority countries with nonwhites you eliminate white children for ever," White Wellbeing Australia's Facebook ad read, accompanied by a cartoon drawing of a white woman. "There will still be a billion Africans in Africa a billion Indians in India and 2 billion Asians in Asia."

BuzzFeed reports that "Facebook took the ad down more than 6 hours after being alerted to it by BuzzFeed News."

Right-wing sourpuss Ben Shapiro's website The Daily Wire is the seventh-ranked publisher on Facebook, according to Popular Information. "On a per article basis," it reports, "The Daily Wire receives more distribution than any other major publisher." Here's how much better The Daily Wire performs than other well-know publishers: The secret to The Daily Wire's success? […]