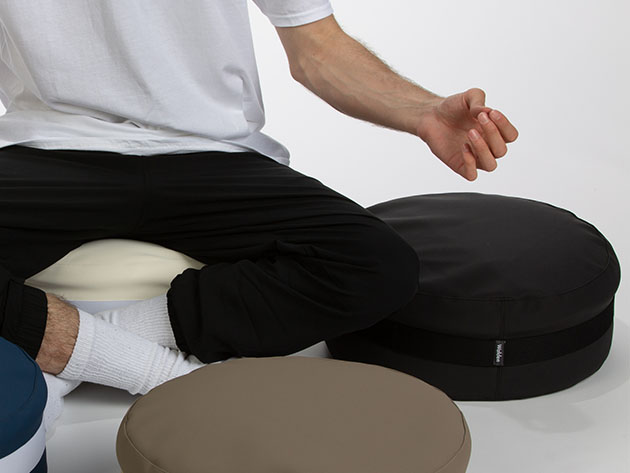 Meditation seems simple. Just sit on the floor, clear your mind, and zen out. But have you tried sitting cross-legged on the floor without moving for even 10 minutes? It starts getting mighty uncomfortable after a while. And if you've got a few years on you, the knees and thighs are going to be barking loudly if you aren't positioned or your posture is off.

More practically, Walden figures if you're comfortable, you're much more inclined to make a meditation session part of your daily habit. That's why their Walden Meditation Cushion is engineered to provide better stability and balance throughout your body while you go deep inside your mind.

These cushions aren't just some dime-store throw pillows either. Walden cushions are made by expert craftspeople in New York City and are constructed with premium state-of-the-art, durable materials for a superior experience.

Crafted using gel-infused memory foam as well as organic and hypoallergenic buckwheat hull sourced locally, a Walden cushion helps raise your hips, allowing for a firm, yet comfortable position without detracting from your mental pursuits.

Each cushion adapts to your particular body type with a water-resistant, antimicrobial zippered shell covering with easy-to-clean coating to make sure your cushion lasts forever.

The cushion itself is just over a foot long and only weighs about 8 pounds, making it easily portable to everywhere you need to find a little spiritual growth time. It even has a convenient carrying strap on the side for easy toting.

The Walden Meditation Cushion comes in three colors: black, cobalt blue, and sand beige. Regularly $145, it's now on sale for a third off, just $94.99.