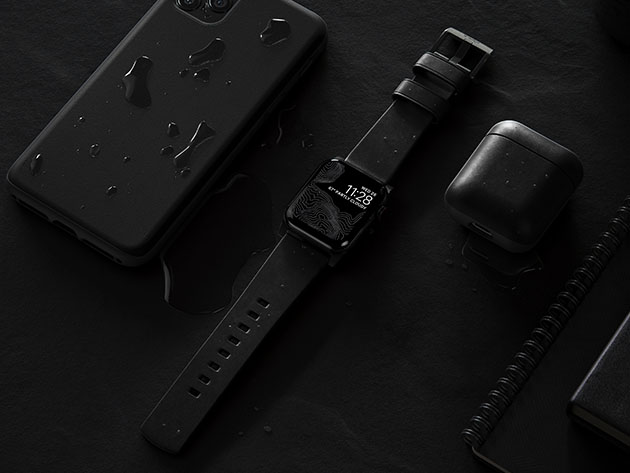 If there’s any knock on most smartwatches, up to and including the industry-leading Apple Watch, it’s probably that the bands aren’t...well, they aren’t usually the greatest.

While Apple is certainly making strides in the watchband game, most models are just as black, boring and nondescript as you’d expect from a tech company.

And where many watch bands truly fall apart is when they’re pushed during daily use, as water, strain, sweat and more all work to literally make cheap bands start falling apart.

The Active Strap from Nomad is built to withstand the rigors of the modern world and look good while doing it.

Designed for everyday life, the Active Strap is not only engineered to fit most Apple Watch models, but it’s also crafted from some of the finest German leather anywhere. For over 120 years, Heinen leather comes from a special tanning process that makes it extremely water-resistant and durable, so athletes and outdoor enthusiasts never have to worry about their band giving out.

In fact, the Heinen leather is also infused with natural lipids for a thoroughly hydrophobic strap that easily wipes clean.

It’s also engineered with ventilation channels, so no matter how hard you go or how much sweat, dirt, sand, or even saltwater the Active Strap battles, it’s always ready to look stylish and cool with a quick brush.

Including the stainless steel hardware, the Active Strap both works and plays hard, regardless of your Apple Watch model. Designed for all the Apple Watch varieties dating back to the Apple Watch Series 1 in 2016, you’d be hard-pressed to find an Apple Watch that this band didn’t work with beautifully.

Between its fit and solid construction, there’s a really good chance the Active Strap might just outlive the watch itself, which should be good news for your upcoming Apple Watch Series 6, whenever that finally debuts.