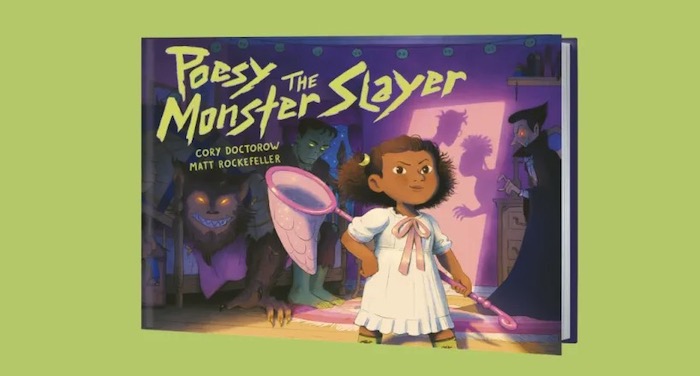 Hurray! Cory's new picture book, Poesy the Monster Slayer, is out today. Illustrated by Matt Rockefeller, it's an "epic tale of toy-hacking, bedtime-avoidance, and monster-slaying."

Cory has sample pages on his blog, Pluralistic.

Cat Wishes: a picture book about being a wish come true

Calista Brill is a legendary comics and picture-book editor, part of the powerhouse team at Firstsecond (she's my editor!), and with Cat Wishes, a picture book that's sweet and surprising, she shows just how well she understands the form she practices.

When asked if I was interested in reviewing a picture book about the making of the atomic bomb, I told the publicist that a lot was going to depend on how the book ended. I had seen some of the interior art and text at that point, and I was intrigued by the way the […]

Our favorite six-year-old guest reviewer, Poesy Taylor Doctorow, is back with a review of the latest volume of Ariol, a French kids' comic that Papercutz is bringing out in English.