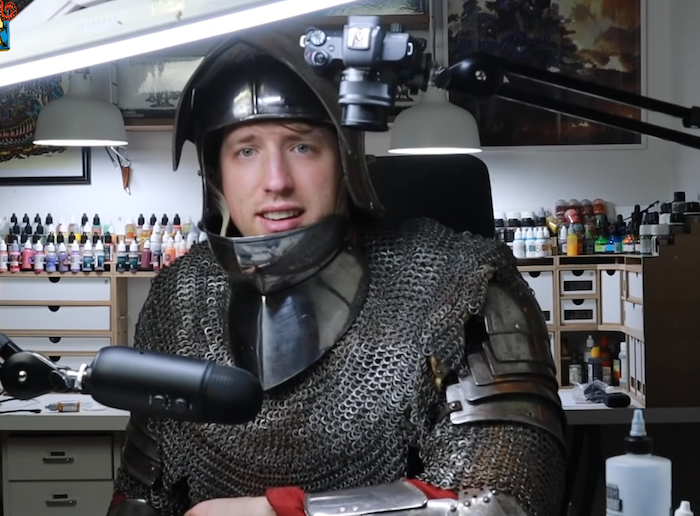 On of the things I love about Squidmar Miniatures is that Emil is always trying unique, unusual, and just plain kooky stuff to make his miniature painting channel more entertaining and fun. Chalk this one up to kooky.

In it, he paints the bust of a medieval knight while dressed in a set of 14th century armor. Given the weight and the heat, he's exhausted even before he starts painting and it's not long before he starts removing the helmet, the gauntlets...

"Now to take it to the next level: Painting a dragon, as a dragon."

"When you realize the bust of the knight has no arms."

"You should make a series called 'painting an X dressed as an X.' That would be cool."

“I painted a happy little scene from Animal Crossing. Doomguy is there too!” This video is from Two Ruru Paints, IMGURian @tworuru’s YouTube show in which he paints landscapes and scenes from video games and pop culture.

In 1962, Andy Warhol exhibited his famous Campbell’s Soup Cans paintings for the first time and cemented his place as a Pop Art powerhouse. Previously, Warhol had bridged his commercial and fine art efforts with paintings based on comic strips and advertisements, but he (rightly) felt that style had already been done by Lichtenstein and […]