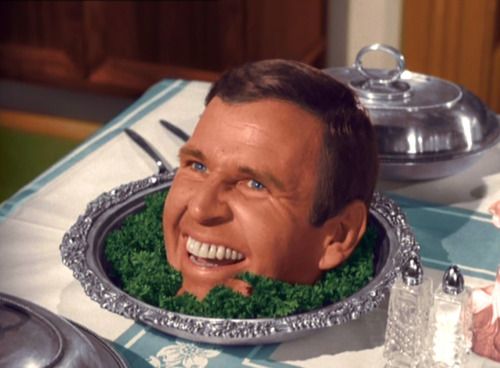 It's been announced that Billy on the Street's Billy Eichner will play the late great TV personality Paul Lynde in an upcoming biopic called "Man in the Box."

After his breakout turn in Bye Bye Birdie, Lynde became a big TV star with his guest turns as Uncle Arthur on Bewitched, and in his role on the long-running game show Hollywood Squares. While Lynde was never publicly “out,” he never lied about his sexuality either, as most famous gay actors of that era did. His unique comic persona often and overtly nodded to his “barely-closeted” lifestyle in a way that still feels groundbreaking for his time. But he was not on the same lists for roles as straight actors. One of the reasons Eichner wants to see the film made is because of the chance to illustrate how little things have changed.

DEADLINE: Paul Lynde was a very funny actor, but what about him made this worth movie treatment for you?

EICHNER: There’s some overlap, between Paul and I, in that we both had our breakthrough in the industry, as performers, presenting a rather larger-than-life, flamboyant, gay persona on screen. Even though I was always very out, Paul was never technically out. But he was as out as you could be, at that time, in that he was clearly leaning into a flamboyant persona. Unlike Rock Hudson, and Tab Hunter, and Cary Grant, and all these other actors, he wasn’t pretending to be straight. You didn’t see him getting set up on dates with women, or having phony relationships with women, to try to present to the world as a straight man. I think that was very admirable, for the time, and also, if you look at those jokes on Hollywood Squares, he comes as close to admitting he’s gay as you possibly can. He’s making thinly veiled, at best, references to gay sex, to finding men attractive, to swinging both ways. It’s not even subtle, and rather bold for the time. That wasn’t some underground, indie film being shot in New York; it was as mainstream as you can get. Hollywood Squares was a huge hit, always in the top 10 or 20 shows, for over a decade. It made him a very famous, wealthy person.

Quadriplegic alcoholic John Callahan was one of the most controversial American cartoonists from the age of newsprint. Now he may finally be getting a long-awaited film about his life starring Joaquin Phoenix and directed by Gus Van Sant.