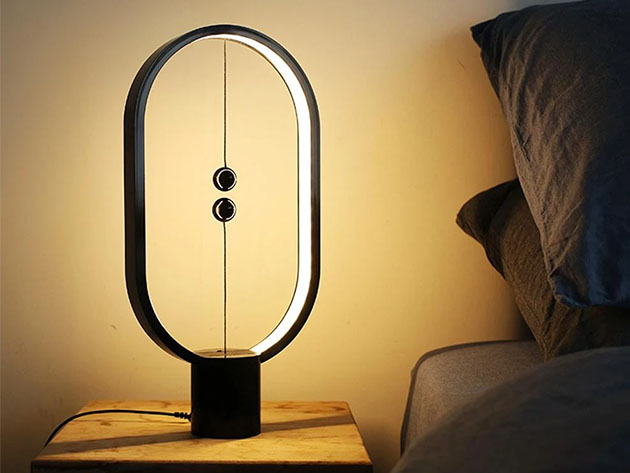 If you’re a regular visitor to Boing Boing, chances are you’re into cool stuff. So when you’re looking to pick up something fairly generic like a toaster oven or a clock or a lamp, you’re probably also looking for something that brings with it a little personality, a little pizzazz, and a little personal style that signals you as its owner are not cut from the ordinary cloth.

So if you’re looking for cool and off the beaten path, there’s no excuse for not taking a serious look at the Marangoni Electromagnetic Light. Because... damn, this thing is cool.

This lamp can sit in your office, hallway, bedroom, or other space and look entirely at home...because it doesn’t even look like a lamp. It doesn’t even have an on or off switch. Point it out to a visitor and they might be hard-pressed to tell you what it is beyond a piece of trippy home or office decor.

But the trick is when this sleek, modern design gets a touch of electromagnetism thrown in. The lamp features two magnetic spheres positioned at opposite ends. When the two spheres are moved close enough together for their magnetic properties to kick in, the spheres lock together, and the LED light ring springs to life. To turn the light back off, all you have to do is break the connection.

The LED bulbs are virtually invisible, casually positioned inside the lamp’s frame, so rather than a harsh blast of light, you get a warm, more subtle, indirect light that casts an off-kilter vibe to any room. From a soft glow to a burst, you can switch between six different temperature levels from 3000K to 6000K to strike just the light volume you want.

The entire piece is run by a built-in 1500mAh rechargeable battery, so even if it isn’t plugged into an AC outlet, it can still shine on for hours.

An instant conversation piece, you can pick up a Marangoni Electromagnetic Light now for over 10 percent off its regular price, just $79.95.