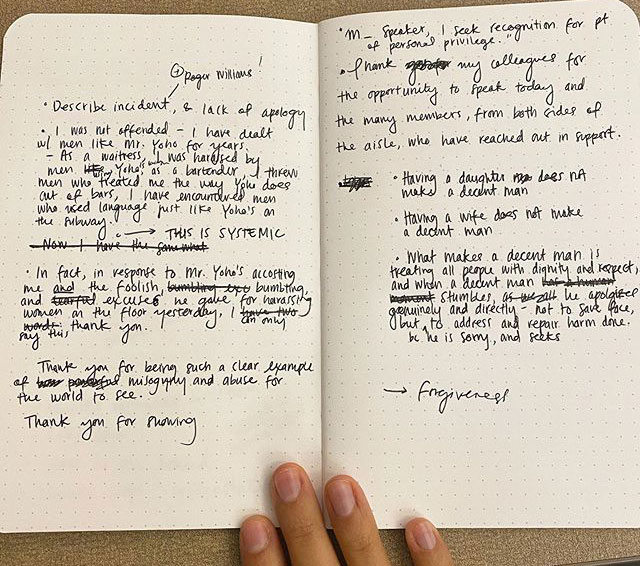 Yesterday AOC posted "behind-the-scenes details" of how she decided how to respond. She included a page from her dot grid notebook with a rough outline of her speech. (What kind of notebook is it?)

I want to thank everyone for your immense outpouring of personal stories and support for one another after last week’s speech on the violence of misogyny and abuse of power in the workplace. I figured I’d share some behind-the-scenes details of what went into that moment.

Many have asked me if my speech was pre-written. The answer is no. But in some ways, yes. Yes because this speech was a recounting of thoughts that so many women and femme people have carried since the time we were children. It flowed because every single one of us has lived this silent script: stay silent (why?), keep your head down (for whom?), suck it up (to whose benefit?). But my chosen words were largely extemporaneous. I got to the House floor about ten minutes before my speech and scribbled down some quick notes after reflecting on what had transpired over the last few days. Pictured here are all the notes I had, and from there I improvised my composition and spoke live.

The evening before my speech, I did not know what I was going to say. I wrestled with this question: what is there to say to a man who isn’t listening? I couldn’t come up with much, because frankly I didn’t want to diminish myself or waste my breath. It was then that I decided if I couldn’t get through to this him, perhaps I could speak directly to the culture, people, and institutions responsible for creating and protecting this violence and violent language.

I also reflected on MY role in all of this - to me, this speech was about holding myself accountable as much as anyone else. Because my first instinct was to let it go. It was my second instinct, too. It was only when sisters like @ayannapressley, @rashidatlaib, @repilhan and friends like @repraskin reminded me how unacceptable this all was that I started to think about what I would have done if this abuse happened to any other person BUT me. That is when I found my voice. Why is it okay to swallow our own abuse, yet stand up for others? I needed to learn that by standing up for ourselves, we break the chain of abuse and stand up for every person after us who would have been subject to more of the same with lack of accountability.

If you don’t get chills from the ASMR audio experience of Tingle Monsters, then you’ll definitely get them from the looming tension and sheer overwhelming sexist dread that oozes throughout this ten-minute short film (especially in the expertly-created comments section that helps to drive the plot). It is weirdly kind of relaxing, until it’s absolutely not. […]