Clintons confess, Obama to blame, and Trump triumphs in this week’s tabloids

The White House Press Office in Exile, otherwise known as the tabloids, is in full Trump-boosting, Clinton-bashing, Obama-blaming mode this week.

The president, who has previously lamented the injustice of the National Enquirer being deprived of the Pulitzer Prize it so richly deserves, should be pleased with the rag’s immolation of Michael Wolff’s political bestseller Fire and Fury, with a cover headline branding it a “Book of Lies!”

“Staffers think prez is dumb. FALSE!” screams the Enquirer's front page. “His ego is out of control. FALSE! He’s hated by his own family. FALSE!”

Not satisfied with demolishing Wolff’s reporting, the Enquirer claims that the book is part of an attack on Trump “orchestrated by Puppet Master-in-Chief Barack Obama!” Wolff is “part of the Obama hit team” chosen by America's last president to undermine Trump, claims the magazine. And to prove its point, the Enquirer sent audio and video tapes of Wolff for stress analysis, and concluded “Michael Wolff is lying throughout.” Well, you can’t argue with science.

Sister publication the Globe dances like it’s 2016 all over again, with its cover story about Bill and Hillary Clinton's alleged "$365 million bribery scandal” at the Clinton Foundation under the headline: "We’re Guilty!" Inside, the story reveals: “Crooked Clintons Confess!"

As the FBI mounts a new probe into possible pay-to-play politics by the Clintons and their Foundation, the Globe claims that the Clintons sought a plea deal to make the whole ugly business go away – and that Trump ordered the Justice Department to make no sweetheart deals, “making good on his promise to lock up the crooked Clintons.” Read the rest 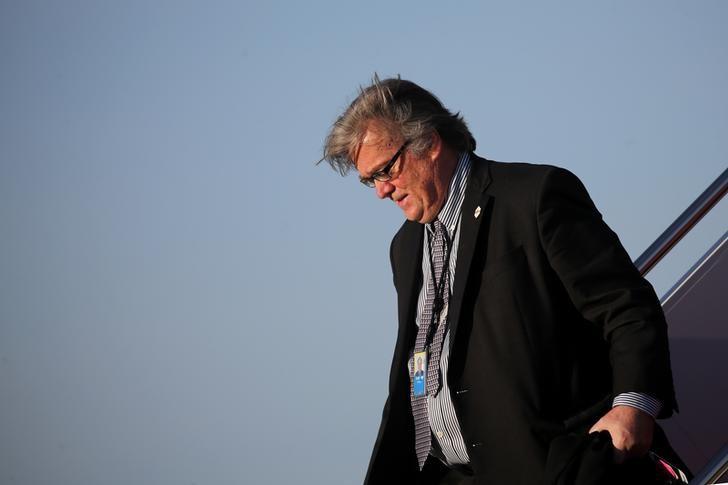 Stephen K. Bannon is departing his post as executive chairman of Breitbart News, the company is said to be announcing on Tuesday. Read the rest 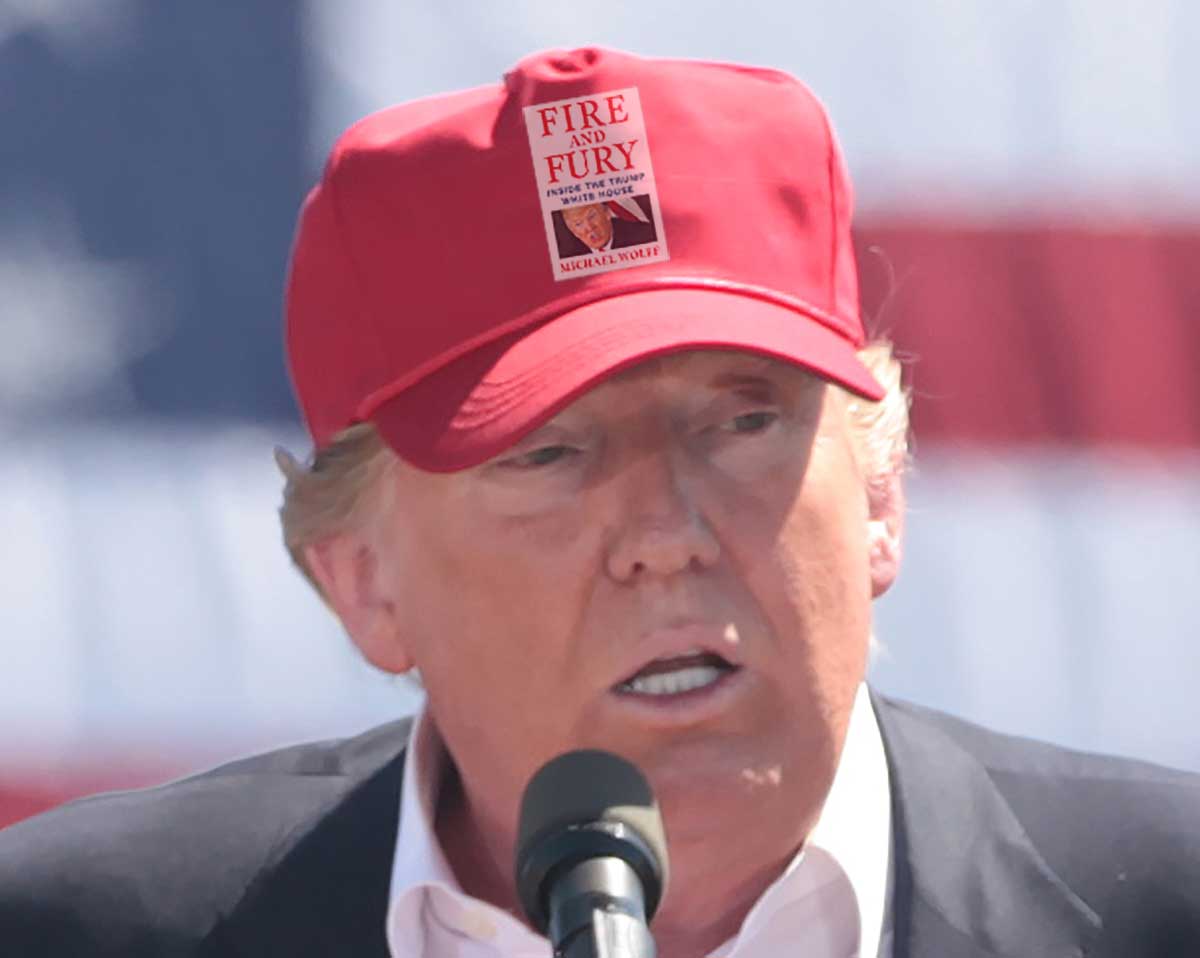 Trump seemed to think it would be a good idea to send the publisher of Michael Wolff's book, Fire and Fury, a letter demanding it to cease publication and "issue a full and complete retraction and apology." The letter had the effect of boosting sales of the book, and also of giving Henry Holt's lawyer the opportunity to write a hilariously scathing response.

The best part is on the last page:

Lastly, the majority of your letter -- indeed, seven full pages -- is devoted to instructing Henry Holt and Mr. Wolff in meticulous detail about their obligations to preserve documents that relate in any way to the book, the article, President Trump, his family members, their businesses, and his Presidential campaign. While my clients do not adopt or subscribe to your description of their legal obligations, Henry Holt and Mr. Wolff will comply with any and all document preservation obligations that the law imposes upon them. At the same time, we must remind you that President Trump, in his personal and government capacity, must comply with the same legal obligations regarding himself, his family, their businesses, the Trump campaign, and his administration, and must ensure all appropriate measures to preserve such documents are in place... Should you pursue litigation against Henry Holt or Mr. Wolff, we are quite confident that documents related to the contents of the book in the possession of President Trump, his family members, his businesses, his campaign, and his administration will prove particularly relevant to our defense.

Above the Law's template for reporting on Donald Trump's stupid, doomed legal threats, of which there are so, so many 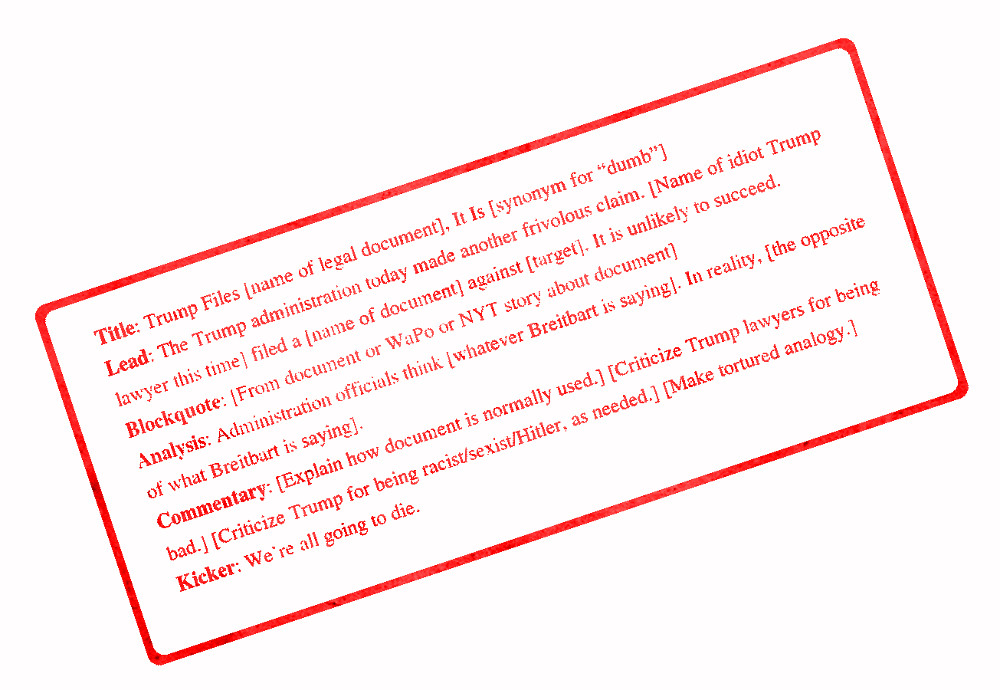 Donald Trump's legal threats against Fire and Fury publishers Macmillan, USA are merely the latest in the series of absurd, unwinnable, doomed legal threats to emanate from Donald Trump, who is an idiot. Read the rest 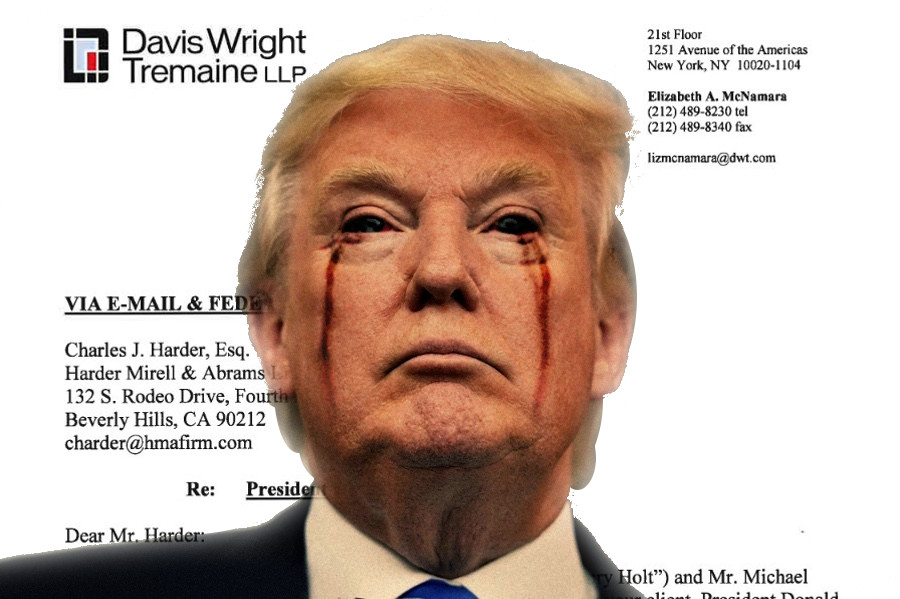 Watch Wolff on Trump: He’s aware of who is Jewish in a way that feels creepy 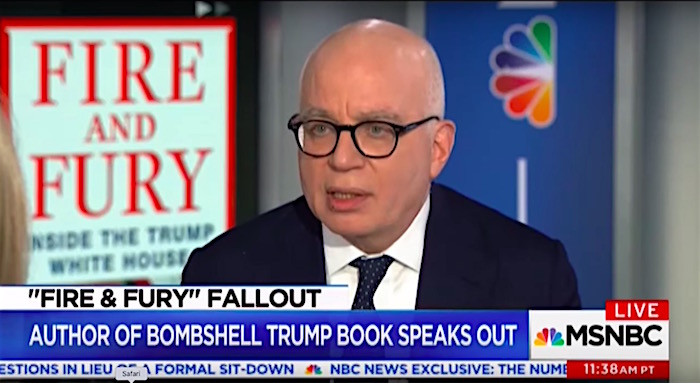 Katy Tur interviewed Fire and Fury author Michael Wolff yesterday, with Tur mostly grilling Wolff on inaccuracies in his book. But what stuck out most was towards the end of the interview, when she asked Wolff if he thought Trump was sexist, racist, xenophobic, and anti-semitic.

Anti-semitic? Wolff: ...“I think he’s aware of who is Jewish in a way that feels creepy,”

And then Tur, who did a fine job with the interview up until now, quickly moves on to another topic! Such a creepy thing to hear, and she didn't ask him to elaborate. 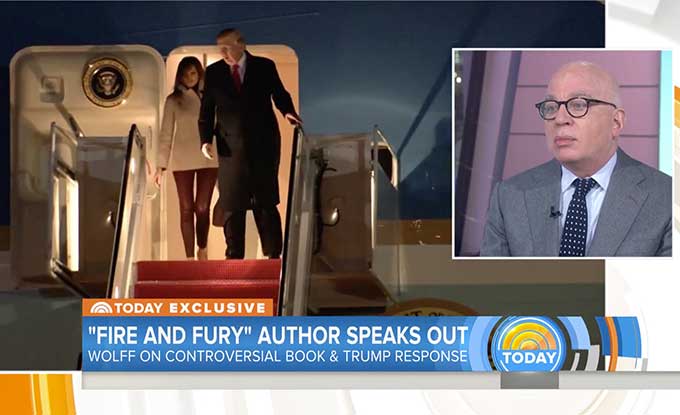 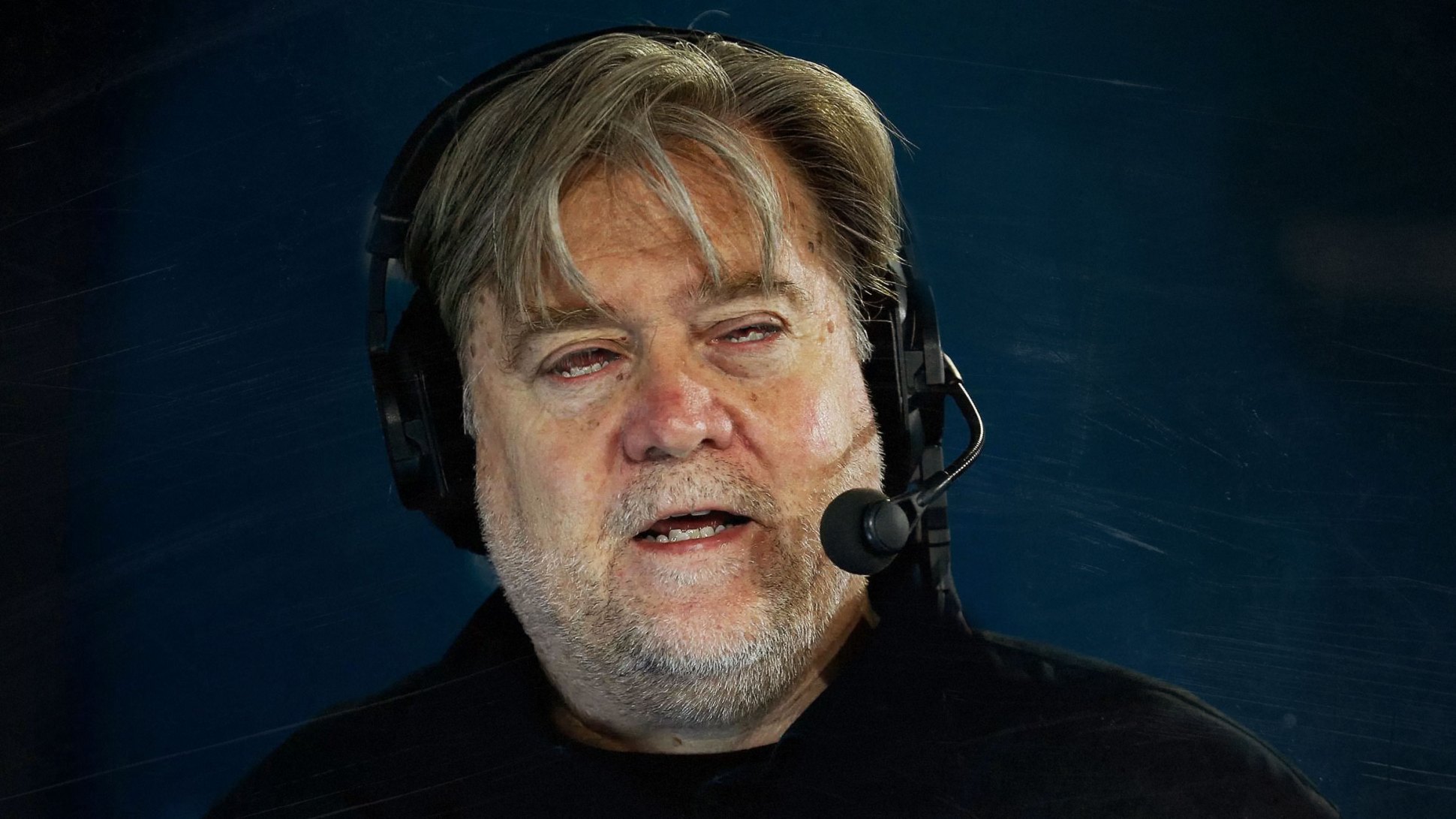 Fire and Fury, explosive book behind this week's war between Trump and Bannon, released early

Michael Wolff's book about Trump, featuring treason accusations from former ally Steve Bannon and reports of the president's dementia, is being released early. Fire And Fury: Inside The Trump White House can be bought immediately at Amazon.

"Due to unprecedented demand," the book about President Trump's White House by Michael Wolff will be released Friday, four days ahead of schedule, according to the book's publisher. The announcement comes hours after President Trump's personal lawyer issued a cease and desist letter over "Fire and Fury: Inside Trump's White House" to Wolff and Wolff's publisher, Henry Holt and Company. Wolff, too, confirmed the early on-sale date on Twitter.

Wolff provides a wealth of new details about the chaos in the Oval Office. Among the revelations: -- What President Trump’s staff really thinks of him -- What inspired Trump to claim he was wire-tapped by President Obama -- Why FBI director James Comey was really fired -- Why chief strategist Steve Bannon and Trump’s son-in-law Jared Kushner couldn’t be in the same room -- Who is really directing the Trump administration’s strategy in the wake of Bannon’s firing -- What the secret to communicating with Trump is -- What the Trump administration has in common with the movie The Producers

Evidently, Trump's threats were to no avail. 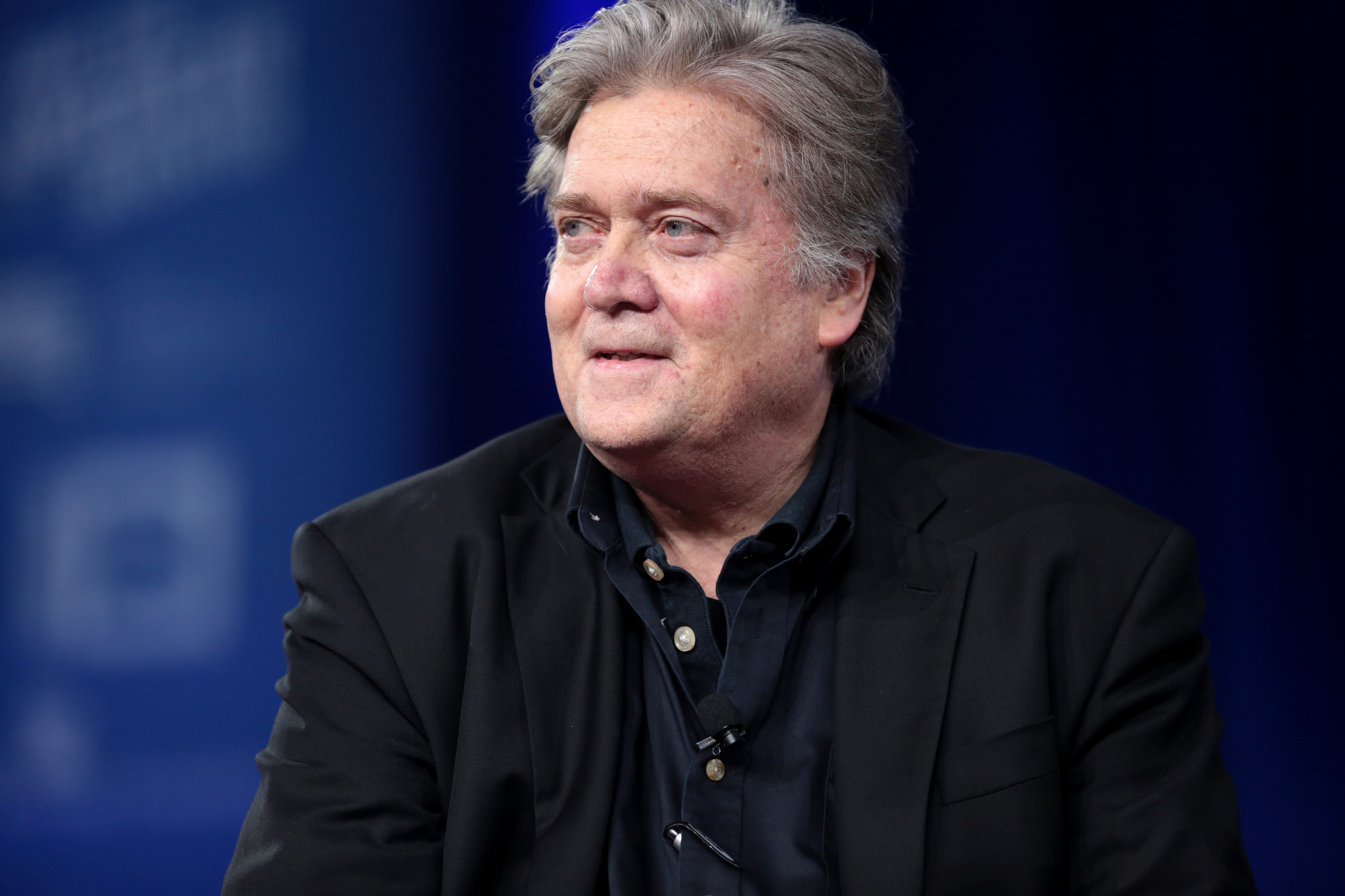 Alt-right impresario Steve Bannon called the meeting between Jared Kushner, Trump Jr, and a Russian lawyer at the Trump Tower in 2016 “treasonous” and “unpatriotic” in a forthcoming book by Michael Wolff called Fire and Fury: Inside the Trump White House.

In response, Trump said his former BFF has "lost his mind."

From a statement issued by the White House:

Steve Bannon has nothing to do with me or my Presidency. When he was fired, he not only lost his job, he lost his mind. Steve was a staffer who worked for me after I had already won the nomination by defeating seventeen candidates, often described as the most talented field ever assembled in the Republican party.

Now that he is on his own, Steve is learning that winning isn’t as easy as I make it look. Steve had very little to do with our historic victory, which was delivered by the forgotten men and women of this country. Yet Steve had everything to do with the loss of a Senate seat in Alabama held for more than thirty years by Republicans. Steve doesn’t represent my base — he’s only in it for himself. 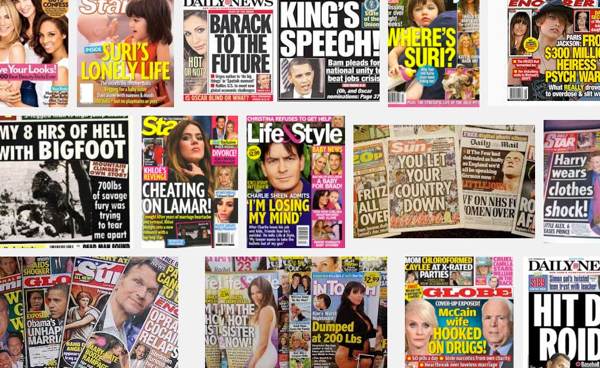 Is President Trump feeding stories to the ‘National Enquirer’?

The magazine boasts an “exclusive” story this week claiming that the Pentagon has developed a space laser that “could zap North Korea off the map” by focusing the sun’s energy into a “beam of pure destructive power.”

At first glance it’s just another fact-challenged ‘Enquirer’ sci-fi fantasy, and yet the magazine does have unprecedented access to President Donald Trump, who is on the record saying the rag deserves a Pulitzer prize, and cited its dubious stories on the campaign trail.

It’s not inconceivable that this ‘Enquirer’ story was planted by Trump himself, echoing his threat to engulf North Korea “with fire and fury like the world has never seen.”

But even if the story came from the Oval Office, it’s likely to be as accurate as the rest of the ‘Enquirer’ offerings this week. America obliterating North Korea doesn’t even merit inclusion on the ‘Enquirer' front page, which is devoted instead to these gems: Julia Roberts’ divorce “turns nasty,” NBC’s Megyn Kelly has been “fired,” and 95-year-old actress Betty White is “battling crippling illness.” Unsurprisingly, none of these claims are supported by the stories inside.

How has Julia Roberts’ divorce turned nasty? It hasn’t, since there is no divorce. The ‘Enquirer’ claims that the actress's’ husband Danny Moder is “furious” about Roberts’ “romantic reconnection” with her ‘Pretty Woman’ co-star Richard Gere. “Kiss destroys 15-year marriage,” reports the mag, displaying an incriminating photo of Roberts and Gere bussing lips. But it’s not what it seems: the embrace was the pair’s greeting on TV’s ‘Today’ show in 2015 - a public, innocent and friendly greeting, not a passionate clandestine lip-lock. Read the rest