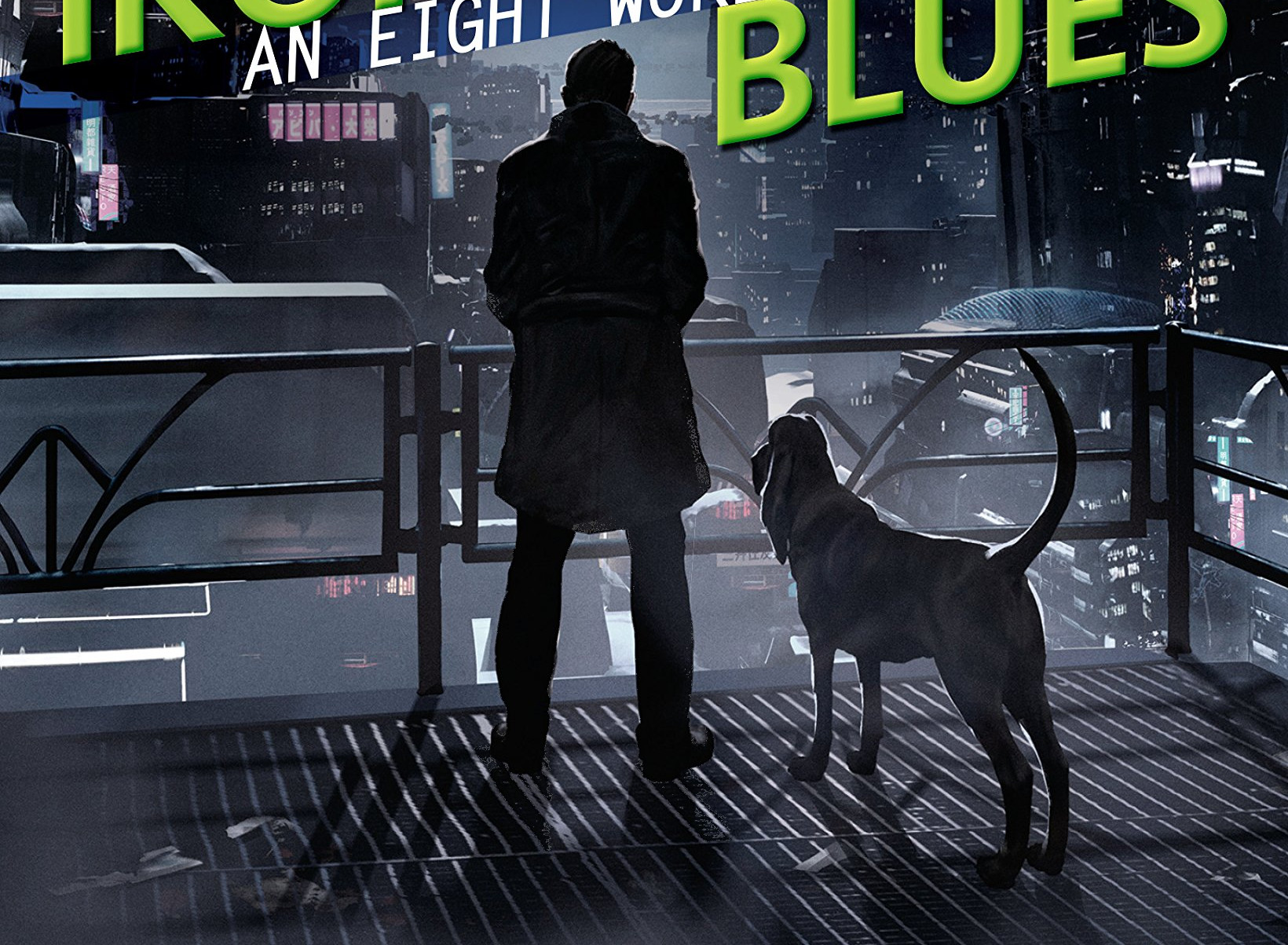 John Varley is one of my all-time favorite authors, whose "Eight Worlds" stories and novels have been strung out over decades, weaving together critical takes on Heinlein and other "golden age" writers with mindfuckingly great technological/philosophical speculation, genderbending, genre-smashing prose, and some of the most likable, standout characters in the field.
Cory Doctorow / 7:07 am Sat, Jun 24, 2017

Remembering Prisoners of Gravity, the greatest science fiction TV show of all time 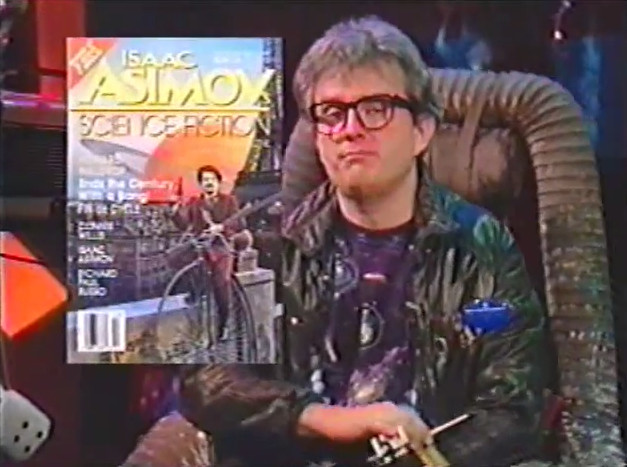 From 1989 to 1994, the public broadcaster TV Ontario ran Prisoners of Gravity, a brilliant science fiction TV show that used a goofy framing device (a host trapped in a satellite who interviewed science fiction writers stuck down on Earth) for deep, gnarly, fascinating dives into science fiction's greatest and most fascinating themes, from sex and overpopulation to cyberpunk and religion. Read the rest

Locus magazine has just released its 2012 Recommended Reading List of science fiction/fantasy/horror, which is always a great reading guide (and a fabulous resource for those of us nominating for the Hugo awards. I'm delighted to see my novel Pirate Cinema and Rapture of the Nerds (written with Charlie Stross) on the best novel list!

Month of sf authors on SF Message Board

Dead-Air sez, "At the Science Fiction Message Board the results are in for our 2009 'Author August' post-a-thon extravaganza! The regular members, along with some visitors lured by news of the upcoming event, have nominated a wildly diverse range of authors. From SF's earliest days to the latest hot new talent, this 4th annual event has as wide-ranging a list of writers as anyone could wish to see. Every day during August a different author will be spotlighted in their own thread in our Author Central forum. We encourage all to visit on that day and post photographs, reminiscences, cover scans, links to appropriate sites, reviews, and other reactions. With 31 days and 31 authors there's a chance to share what you know as well as learn new things, so come and join in the fun!"

(Thanks, Dead-Air!) Read the rest

Spider Robinson's latest podcast installment is a reading of John Varley's towering and brilliant 1979 novella, "The Persistence of Vision," winner of both the Hugo and Nebula Awards. I'm a gigantic John Varley fan (especially of his short fiction) and this story may be the best of the lot.

"The Persistence of Vision," is the story of a drifter crossing America during a terrible depression who happens upon a Taos commune run by and for a community of blind-deaf people, the adult cohort of a decades-gone German measles epidemic. In the commune ("Keller"), the narrator discovers important, unsuspected truths about independence and interdependence, communication and community, and the power of hope and perseverance.

This story pulls off one of science fiction's best tricks: exploring the fundamental question of whether disasters demand that you bug out, heading for the hills to wait out the disaster, or bug in, grabbing your go-bag and heading for your neighbors' to see how you can help.

This is a timely reading -- and not just because the economy is in free-fall. Technology is rupture -- each new wave of technological change displaces and remakes us. Today's technocratic winners are tomorrow's superannuated losers. The future of human history will be about how we answer the bug in/bug out question.

Every time I read this story, it fills me with sorrow and hope and makes me mist over, and Robinson's reading is no exception. If you only listen to one piece of audio this week, make it Spider's reading of "The Persistence of Vision." Read the rest

My editor, Patrick Nielsen Hayden, rang me yesterday to talk about a weird little phenomenon: people who were going to stores looking for my newest, Little Brother, were walking away unfulfilled because they were looking in the science fiction section, not the young adult section. Many of us grew up in an era before the young adult section -- when the kids' section in the store was just picture books and some 400-volume sharecropped series like Sweet Valley High. No longer -- practically every bookstore now sports a large (and growing) YA section filled with some of the most amazing work being done in any literary genre today.

Indeed, a quick browse through Boing Boing's archives turned up this (incomplete) set of links to my YA section, the young adult books I've loved and blogged here -- most of them are not available on the science fiction shelves of your local store, only in the YA section:

Living in a space that no one watches too closely is one of the secret ways that people get to do excellent stuff. Read the rest

StarShipSofa is a weekly podcast that has started to put out Hugo Winning audio stories for free. Last week we put up David Brin's 1985 Hugo winning story "The Crystal Spheres." This week we put up Bruce Sterling's 1989 story "We See Things Differently." Other narrated stories include 2007 Hugo nominee Peter Watts and Michael Moorcock.

Monty sez, "John Varley, one of the most original science fiction authors ever, is selling his collection of '18+ U-Haul Boxes' worth of toy robots on e-bay. This link takes you to a page on his excellent website (Varley reviews movies and books like nobody's business)that explains the sale and links to the relevant ebay pages and pictures of the toy robots. Any robot once owned by Varley is 50 times better than an ordinary robot!!"

No single writer has done more to change the way I think about science fiction than John Varley -- and now that his classic short stories (the very best of his work) are all available in one volume, you can have your head done in by a master without having to haunt the used book stores looking for out-of-print collections.

The novel Heinlein would have written about GW Bush's America

Red Lightning, the latest novel from John Varley, is the book Robert A Heinlein would have written if he lived in George Bush's America. Varley is a kind of latter-day, humanist Heinlein, someone who writes science fiction of great imagination and verve (I stole all the best stuff in my first novel, Down and Out in the Magic Kingdom, from John Varley stories), with so much soul they like to tear your heart out.

Red Lightning is a loose sequel to Red Thunder, an homage to Heinlein's juuvenile novels (hands down his best works, BTW: tight, fast-moving, and funny-inspirational), especially Rocketship Galileo. In Red Thunder, an idiot-savant Cajun physicist invents a physics-defying power-supply that his young cousins use to travel to Mars -- after paying a local graffiti tagger to burn a huge mural down the side of their spaceship. It's boys-own-adventure sci-fi with sex and cussing, and it's just the kind of book that I've loved to hell and back since the age of 13 or so.

Red Lightning is much darker, but also even better. It's the story of the next generation of "Martians" who live on a tourism-driven Mars made possible by the power-source detailed in the first book. Ray is the son of Manny, the hero of Red Thunder, and he's a Martian the way that Heinlein's protagonist in "The Menace from Earth" is a Loonie (just one of many loving, sly nods to Heinlein in this book). He ends up on Earth after a natural disaster threatens his family there, and finds himself embroiled in a Katrina-style search-and-recovery mission -- but he's also exposed to the state of the planet, which is not so good. Read the rest

I'm pretty well-read in the modern sf canon, but there are some gaps in there that are almost embarrassing in scope. Take Kim Stanley Robinson's Red Mars. This doorstopper, clocking in at nearly 800 pages, is the first volume in a trilogy of comparably-sized companion volumes, each of which depicts a different vision of the [dis|u]topiian establishment of a permanent human settlement on Mars. When Red Mars first came out, I was working at Bakka Books, the science fiction bookstore in Toronto, and there was something else in my queue that month, and one of my co-workers had already dived into it and was writing the shelf review, and it seemed like such a commitment that, well, I just never got around to it. With the publication of Green Mars and Blue Mars, it just got worse: if I couldn't clear enough schedule to read volume one, volumes two and three were impossible.

It wasn't that I didn't like Robinson's books. Quite the contrary, I adore them. Pacific Edge -- a gripping, rollicking utopian novel whose plot hinges on a zoning debate over the placement of a baseball diamond -- is one of my all-time favorite books. When Down and Out in the Magic Kingdom came out and the reviewers compared it to John Varley for the technology stuff, I was honoured, but the few reviews that compared it to Pacific Edge sent me over the moon: if Robinson could disrupt his utopia with a zoning fight and make it into a gripping tale, could I do the same with a fight over the politics of Disney ride fandom and design? Read the rest

Normally, I post reviews of my book on the reviews page of the book-blog, but this is so damned cool -- The Onion has reviewed my novel!

Cory Doctorow's first novel, Down And Out In The Magic Kingdom, borrows freely from tropes established by pioneers like John Varley, Spider Robinson, and Robert Silverberg, and refined more recently by the likes of William Gibson, Neal Stephenson, and Rudy Rucker. But Kingdom establishes its individuality with smooth and practiced ease, drawing out a kinetic, immersive yarn that seems far more detailed than its scant 200 pages should permit...

Kingdom expertly blends the peer-rating mania of current net-entities, from Slashdot to eBay, with current corporate strategies, hiding it all behind a colorful futuristic façade. Meanwhile, Jules puts a personal face on an impersonal world, as he struggles with technological failures, a suicidal friend, a painful love triangle, and an unknown rival who casually, publicly murders him. The result is a moderately prescient, wholly entertaining yarn that's short enough to be read in a single sitting, and involving enough that it almost inevitably will be.

(Thanks, Kenny!) Read the rest