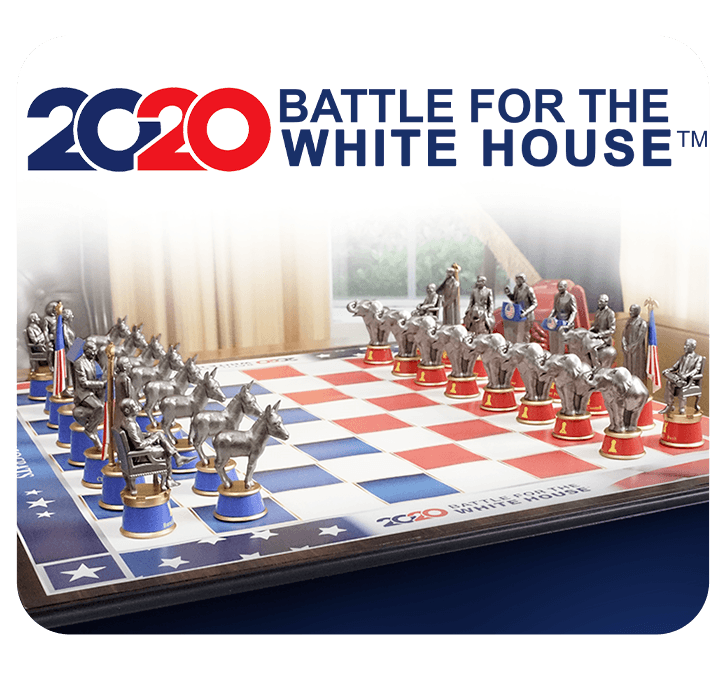 You can own a tasteful, beautiful chess set commemorating the forthcoming 2020 presidential election. On one side – red and blue, which allows either party to play as white or black — you have Trump as king, Pence as queen (nice), Justices Kavanaugh and Roberts as bishops, party leaders Mitch McConnell and Kevin McCarthy as knights, and President G.W. Bush and Vice President Dick Cheney as rooks. On the other side, the rooks are President Barack Obama and Vice President Joe Biden, the knights are Nancy Pelosi and Chuck Schumer, the bishops are Justices Ruth Bader Ginsberg and Sonia Sotormayer, and the king and queen are empty plinths, because the Democrats haven't picked them yet.

You will receive two empty podiums to play now. When the democratic nominees are announced, you will be notified to complete your set.

Assume they'll charge you extra for the nominees, and again for a new rook should Biden be either.

Embedded above is the television ad for the set, described by Jimmy Traina as the "most batshit crazy commercial I’ve ever seen."

as seen on tv / chess / politics