Octopuses, starfish, and prawns rain down on Chinese city 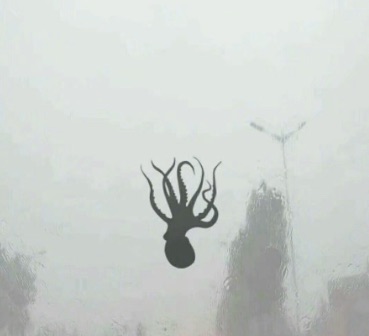 A mass of sea creatures rained down on the Chinese city of Qingda during a storm last week. From Mysterious Universe:

The phenomenon of “fish rain” or “animal rain” is a rare, but very real, weather phenomenon which has been documented for centuries. Reports of thousands of falling fish, frogs, and other animals that have no business in the sky have occurred since the Roman empire...

While waterspouts are widely believed to be responsible for the phenomenon, the process of waterspouts sucking animals out of the sea has never been directly observed. This explanation certainly makes sense for Qingdao, China. It’s a coastal city, and this fish rain was accompanied by a large and powerful storm system.

Mysterious black ring appears in the sky above Kazakhstan

No one can explain how this square-shaped fire started on a sofa in a closed shop in London. A passer by noticed it and called it on.

Clyde Johnson, from the shop, said: “We’re very thankful to Mrs Patel for phoning the fire brigade but we still have no idea how it started. It’s a fire resistant sofa luckily so it minimised the fire but we don’t know if it was caused by a laser pointer or maybe a magnifying glass or just the sun shining in oddly. The police can’t figure it out either.”

Story an video here. [via] Read the rest

CNN on blood falls and other Fortean phenomena

It's apparently Fortean Friday over at CNN where they share a handful of unusual natural curiosities and mysteries like "Magnetic Hill" in New Brunswick, spherical boulders in New Zealand, the "sailing stones" that creep along Death Valley, and the "Blood Falls" of Antarctica caused by an iron-rich lake below the ice. "Blood Falls and other natural oddities" Read the rest

Now I Know: The Revealing Stories Behind the World's Most Interesting Facts

When I was a kid, I devoured Frank Edwards' 1959 book of weird "true" stories, Stranger Than Science, and C.B. Colby's book of "hair raisers and incredible happenings," called Strangely Enough. The story about the Inuit village that mysteriously became a ghost town (with cooking fires still burning), and the one about the man who vanished on his front lawn in front of his wife and kids enthralled me and my friends.

Unfortunately, most of the stories weren't even "true." They were flat-out false, as I learned in recent years when I googled them.

A couple of months ago I received a review copy of Dan Lewis' Now I Know, which has 100 strange phenomena stories that are just as fun as Stranger than Science and Strangely Enough, with the bonus of being true. (UPDATE: It's on sale as a Kindle ebook for just $(removed)) Read the rest