Kristen's figured something important out: "the addition of 'Harry' to almost any Plato quote makes it seem legitimately like a nugget of wisdom out of the mouth of Albus Dumbledore." Read the rest

Yesterday, the Greek government forcibly shut down the state broadcaster, ERT, sending in the police to drag journalists away from their microphones. The government claimed that the shutdown was the result of inescapable austerity measures. In response, the European Broadcasting Union -- an umbrella group representing public broadcasters across Europe -- has set up a makeshift mobile studio where ERT broadcasters can continue to work and stay on air.

This is being fed around Europe on an EBU satellite as part of its European news exchange operation and can be picked up by commercial stations in Greece but not the general public.

A spokesman for the EBU, which is headquartered in Geneva, said a "high-level meeting with a conference call" with the director general of ERT would take place later on Wednesday to decide on next steps.

Roger Mosey, the BBC's editorial director, who is on the EBU board told the Guardian: "We're watching events in Greece with great concern. When countries are in difficulty, there's an even bigger need for public service broadcasting and for independent, impartial news coverage. I hope that's restored in Greece as soon as possible."

The EBU spokesman said ERT staff in contact with the organisation have told them the power has not yet been cut by the government, but email servers have been taken down. They are now contacting the EBU through smartphones, using Facebook and personal email accounts.

"This is unprecedented, stations have closed and re-opened for a number of reasons, but never with such abruptness," said a spokesman for the EBU.

Greek government shuts down state broadcaster, police force journalists out of the building

Michael sez, "The Greek government forcibly shut down transmissions of all TV and radio stations operated by the state-owned broadcaster ERT, with police ejecting journalists and other employees who were occupying the buildings."

A few hours ago, the Greek government announced that state television and radio channels would be silenced at midnight. No public debate, no debate in Parliament, no warning. Nothing. ERT, the Greek version of the BBC, will simply fold its tent and steal into the night. As probably the only Greek commentator to have been blacklisted by ERT over the past two years, I feel I have the moral authority to cry out against ERT’s passing. To shout from the rooftops that its murder by our troika-led government is a crime against public media that all civilised people, the world over, should rise up against.

Into The Fire is a film with a difference. Besides being a hard hitting documentary which shows the plight of refugees and migrants amidst a collapsing Greek economy, it's also an experiment in new film production and distribution techniques.

A Greek hacker stole the personal data of about 9,000,000 Greek residents, which is approximately the same as the population of Greece itself. As Kevin at Lowering the Bar points out, this means that "If You're Greek, Someone Probably Just Stole Your Identity."

Third, according to some reports, the files "appeared to include duplicate entries," so the actual number of affected Greeks may be lower than 9 million, but we don't know how much lower yet. For now we have to assume the number is 9 million, so your answer should have been that there is approximately a 91% chance that any particular Greek citizen's identity has been stolen. That number is high enough that it seems reasonable to say that somebody just stole an entire country's identity, and to use italics to do it.

If You're Greek, Someone Probably Just Stole Your Identity Read the rest

The German pharmaceuticals maker Merck will no longer deliver the cancer drug Erbitux to Greek hospitals, according to a statement from the company today. The drug also known as cetuximab is often used for patients with head and neck cancers. The move to halt distribution is a sign of a worsening economic and budget crisis, and its impact on critical services including care for cancer patients. (thanks, Gerrit) Read the rest

Antifascist Greek protesters say they were tortured by police

Antifascist protesters in Greece who were arrested during a clash with members of the neo-fascist Golden Dawn party/gang say they were tortured by the police, who put out cigarettes on them, tased them, beat them, and threatened to provide their names and addresses to Golden Dawn revenge squads. The Guardian's Maria Margaronis reports:

Several of the protesters arrested after the first demonstration on Sunday 30 September told the Guardian they were slapped and hit by a police officer while five or six others watched, were spat on and "used as ashtrays" because they "stank", and were kept awake all night with torches and lasers being shone in their eyes.

Some said they were burned on the arms with a cigarette lighter, and they said police officers videoed them on their mobile phones and threatened to post the pictures on the internet and give their home addresses to Golden Dawn, which has a track record of political violence.

One of the two women among them said the officers used crude sexual insults and pulled her head back by the hair when she tried to avoid being filmed. The protesters said they were denied drinking water and access to lawyers for 19 hours. "We were so thirsty we drank water from the toilets," she said.

One man with a bleeding head wound and a broken arm that he said had been sustained during his arrest alleged the police continued to beat him in GADA and refused him medical treatment until the next morning. 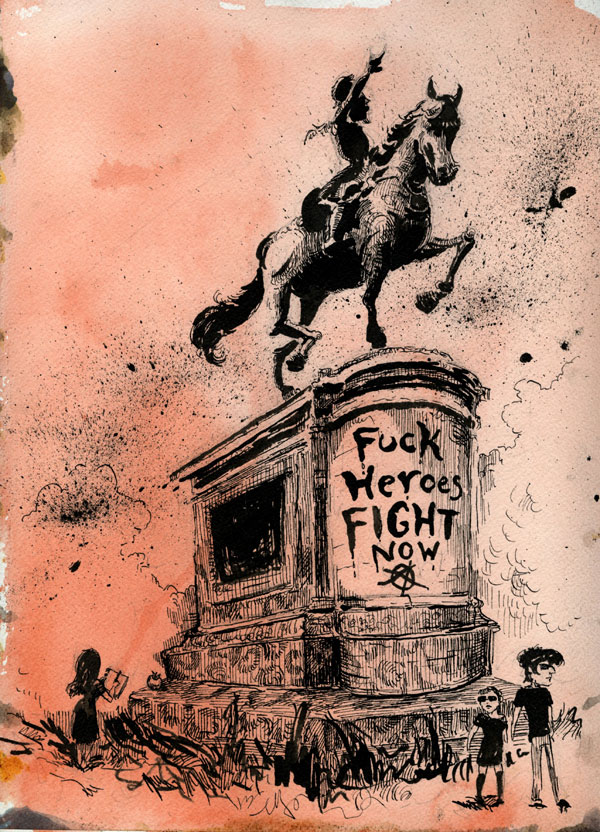 A reader writes, "On September 24, Greece's Cyber Crimes division arrested a 27 year old man on charges of blasphemy, for his website that mocks a well-known Greek monk Elder Paisios, using the name Elder Pastitsios (the even better-known Greek pasta dish). The link is to a Greek blog, which shows a religious procession through the streets of Athens last Friday led by local Pastafarians in protest of the arrest, during which pastitso was distributed to the crowds as a holy blessing. It's being widely reported that the arrest was instigated not by the Greek Orthodox church, but by the neo-Nazi group Golden Dawn, who currently hold seats in Parliament. The Twitter hashtag for the story is #FreeGeronPastitsios."

An interesting piece in the Guardian this week about cashless commerce in Greece, where the currency crisis has prompted citizens to take unusual measures to obtain essential goods. One exchange website in particular is cited, and a unit of barter known as "tems." The network has been online for about a year and a half. Snip from a portion of Jon Henley's report about the open-air markets where tems are exchanged for daily neccessities:

“They’re quite joyous occasions,” she said. “It’s very liberating, not using money.” At one market, she said, she approached a woman who had come along with three large trays of homemade cakes and was selling them for a unit a cake. “I asked her: ‘Do you think that’s enough? After all, you had the cost of the ingredients, the electricity to cook …’

“She replied: ‘Wait until the market is over’, and at the end she had three different kinds of fruit, two one-litre bottles of olive oil, soaps, beans, a dozen eggs and a whole lot of yoghurt. ‘If I had bought all this at the supermarket,’ she said, ‘it would have cost me a great deal more than what it cost to make these cakes.’”

What rules the system has are designed to ensure the tems continue “to circulate, and work hard as a currency”, said Christos Pappionannou, a mechanical engineer who runs the network’s website using open-source software. No one may hold more than 1,200 tems in the account “so people don’t start hoarding; once you reach the top limit you have to start using them.”

All is not well in Greece

A gasoline bomb explodes at riot police during a huge anti-austerity demonstration in Athens' Syntagma (Constitution) square February 12, 2012. Historic cinemas, cafes and shops went up in flames in central Athens on Sunday as black-masked protesters fought Greek police outside parliament, while inside lawmakers looked set to defy the public rage by endorsing a new EU/IMF austerity deal. Below, a protester hurls rocks at riot police; another flees.

"Let's Play: Ancient Greek Punishment" is a series of 8-bit Flash games based on the punishments visited by the gods on various naughty ancient Greeks: Sisyphus, Tantalus, Prometheus, Danaids and Zeno. There's something particularly awfully wonderful about rapidly pressing the G and H keys to writhe in agony and dislodge the eagle that is devouring your liver.

Antikythera mechanism in a wristwatch

Swiss luxury watch company Hublot has announced a version of the Antikythera mechanism, an ancient Greek astronomical calculator, that is incorporated into a wristwatch. The mechanism is to be displayed at the 2012 Baselworld expo before moving to a permanent exhibit at Musée des arts et métiers in Paris.

Hublot painstakingly recreates a mysterious, 2,100-year-old clockwork relic - but why?

(Thanks, Richard!) Read the rest