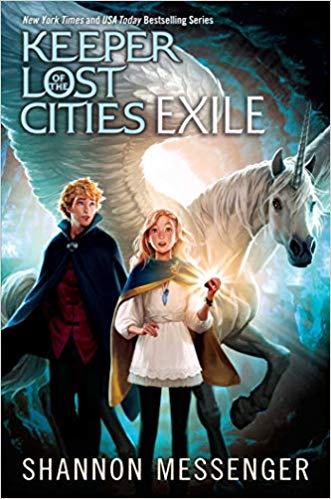 In Exile (Keeper of Lost Cities,) Sophie Foster is back and still being put through the most horrible adventures Shannon Messenger can imagine for a young teen!

I am in love with the Keeper of Lost Cities series. Sophie Foster is a 13-year-old ripped from the loving arms of her human family and manipulated into saving the world. Kept in the dark about her own mysterious past (that everyone else seems to know,) Sophie is forced to sneak around and break every promise she makes about not doing exactly that! Sophie nearly dies every few chapters, while also putting 'friends' and 'family' at risk, however, it is unclear who is really a friend and who isn't!

Sophie is an elf. For some reason, still, unbeknownst to the readers, Sophie was placed with a human family as a child and hidden away. When the elves find her they abduct her, brainwash her family into believing she never existed (after Sophie negotiates this fate for them rather than simply DEATH,) and then demand she save the world multiple times. I can not imagine a kid surviving this shit with a shred of self left at the end of the first book -- somehow things got EVEN WORSE for Sophie in book 2.

After not really coming to grips with her fate from book 1, Sophie is forced into an adventure to save the only adult who seems to have told her anything much useful. Along the way, Sophie repairs her own damaged mind, which was responsible for losing her buddy in the first place. Read the rest