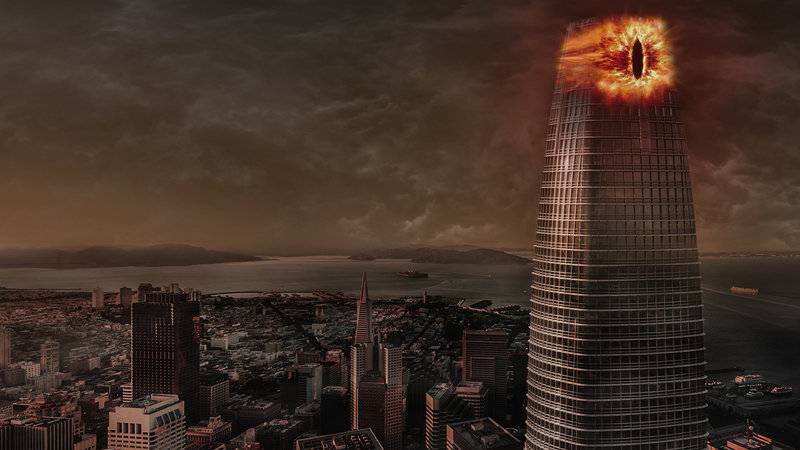 While US Senator, and former SF Mayor, Diane Feinstein is no fan of Salesforce Tower, local Tolkien fans have found a way to turn the phallic wonder into a Halloween decoration.

Why this is a one night only thing, I do not understand.

We believe in the power of the internet as a gathering place for people to share ideas and affect real world change. Our goal is to create a breath of creatively fresh air amid an otherwise barren political landscape.

Salesforce (or Boston Properties) has raised the highest flag in San Francisco, itself a beautiful piece of innovation, on which we mostly experience very pedestrian content. Often traffic, seagulls, and sometimes literal pedestrians. We invite the organization who has redefined the San Francisco skyline and, in the process, contributed to small and large business worldwide, to stand not only as a beacon for capitalist pursuit but to tip their hat to the people, culture, and community of this great city. A city built on creativity, exploration, and burning self-expression. We invite the organization to fly a flag for all who dare to dream, uniting the districts, strengthening the ties, and fortifying the bridges by lighting an LED fire atop this sanctuary city. In the process embracing a fun, artistic, and timely show of creativity that the whole city can enjoy - for one night only.

It has been said that bonds are formed through shared experiences, the strongest of which are forged in fire.

in san francisco everyday is halloween / one ring to bind them