1944 memo from manager sick of "gobbledygook" 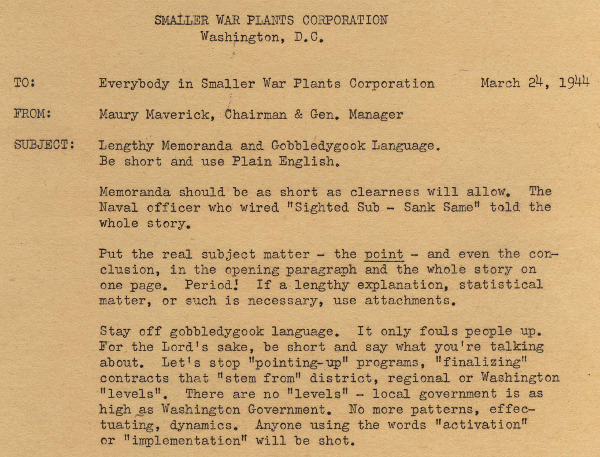 In 1944, manager Maury Maverick sent this memo to the workers at his government agency. This is the first known usage of gobbledygook to refer to obscure jargon. It wouldn’t be the last.(From the National Archives.)

The term gobbledygook was coined by Maury Maverick, a former congressman from Texas and former mayor of San Antonio. When Maverick was chairman of the Smaller War Plants Corporation during World War II, he sent a memorandum that said: "Be short and use Plain English. . . . Stay off gobbledygook language." Later, writing in the New York Times Magazine, he defined gobbledygook as "talk or writing which is long, pompous, vague, involved, usually with Latinized words." The allusion was to a turkey, "always gobbledygobbling and strutting with ridiculous pomposity."