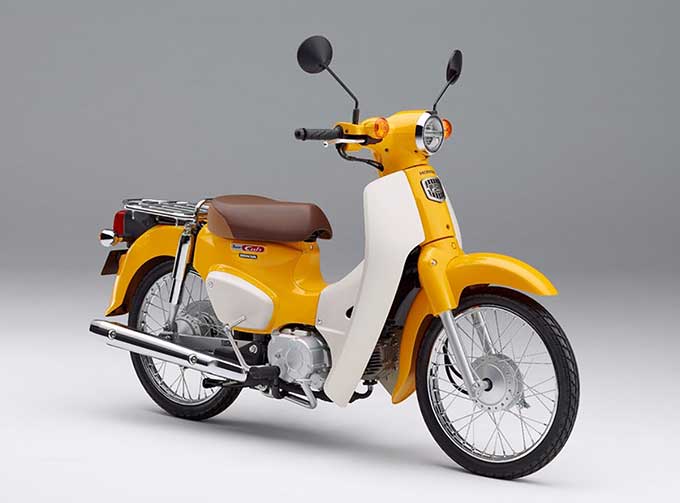 Honda has been manufacturing the Super Cub 50 and 110 since since 1958. Over 100 million have been produced. On November 10, they'll release a "classic" model that harks back to its original design introduced 60 years ago. Shown here, the 2018 Honda Super Cub in Pearl Shining Yellow color.

If there is one motorized vehicle that deserves to be termed as iconic, that has to be Honda's Super Cub. The small, rugged two-wheeler has been constantly in production since 1958, with numerous variants and offsprings still pouring out from 16 Honda factories in 15 countries.

Among these, the basic Super Cub 50 and 110 are still in production in China and, as Honda has just announced, a new dedicated production line has been set-up at the Kumamoto factory in Japan. These two direct descendants of the original 1958 model have received a well-deserved revamp, ahead of delivery to Japanese dealerships on November 10.

The plastic costumes have undergone a discrete redesign, while the application of LED lights brings about some energy-saving freshness. The four-stroke single-cylinder engine has also benefited from a gentle touch of modern engineering and metallurgy, now employing tougher and lower-friction pistons and cylinders, as well as a host of present-day tidbits, like needle bearings, new oil filter, a dipstick to measure oil level etc.