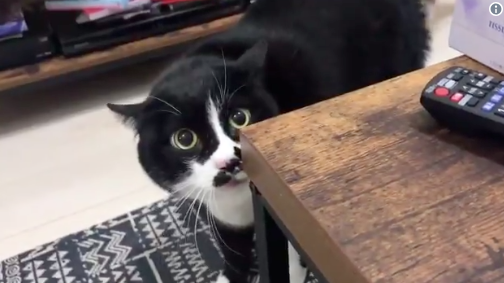 This is Chibi Maru, a Japanese cat with a demonic cry! His human companion LLR伊藤智博 recently posted this video of Chibi Maru vocalizing in a most unusual way. He seems to say, "Ololiloliloliloliloliiiloli," reports SoraNews24.

Is the cat angry? Defensive? Summoning the devil? Something ain't right with its ears folded down like that.

“Chobimaru is talking again…Scary…” tweeted @llritotomohiro, who says this is the second time the kitty has emitted this guttural, rhythmical series of sounds...

A few other cat owners even chimed in to say they’d had similar experiences with their own animals, often as portents of trouble soon to come.

“Did Chobimaru throw up after this? When my cat sounds like he’s casting an incantation, I always run to grab some newspapers and tissues.” “My cat does the same thing! After he makes this kind of noise, he throws up. It’s nice of him to always give me an advance warning.”

However, @llritotomohiro, while thanking everyone for their concern, was happy to report that Chobimaru was in fine spirits. After his minute or so of chanting, he returned to normal, eating dinner as he always does and playing energetically in the house.

The internet did its thing and put his scary vocals to a dance beat: