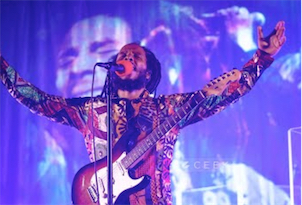 This year marked the 75th birthday of the great Bob Marley (1945-1981). As part of the celebration, Bob Marley and Rita Marley's son Ziggy Marley, 51, just recorded a full concert of his father's music. Watch above! (The performance was recorded at a studio in Los Angeles with clear partitioners between the band members.)

According to Rolling Stone, Marley's platinum birthday year will be commemorated by numerous events and releases including "the 12-part documentary series Bob Marley: Righteousness as well as soccer doc Rhythm of the Game, new videos for “No Women, No Cry” and “Three Little Birds,” the unearthing of live performances and a SiriusXM station dedicated to the reggae legend." Read the rest