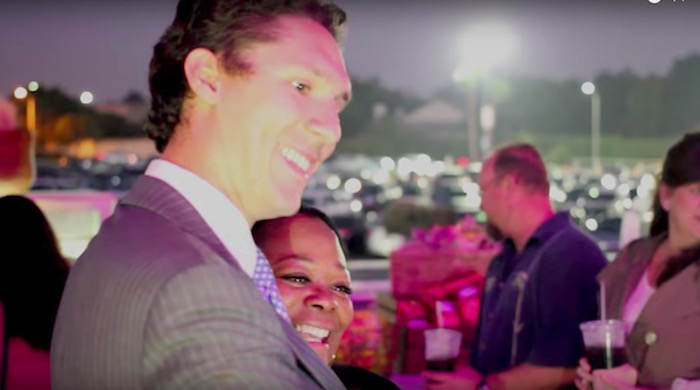 Comedian Michael Klimkowski looks a lot like shady Megachurch pastor Joel Osteen (you know, the one who shut down his church when Hurricane Harvey survivors needed him most), so Klimkowski's sketch comedy group Dabs Den decided to have some fun.

Before an Osteen event started at the huge Forum in Los Angeles, watch how Kimkowski gets through parking security with his Osteen looks and fake charm. "God bless you," he tells many of Osteen's fans, as they ooh and ahh and ask to take pictures with him. He then makes it into the Forum, backstage, and finally in front of the stage, where people are just starting to trickle in. Klimkowski is smoooooth. Finally one of Osteen's henchmen recognizes that this isn't his sleazy boss, and security ushers him out, telling him he's going to jail. We never find out how it ends in this video.

But fortunately, AVclub fills us in:

Henke also tells us that the confrontation recorded at the end of the video was with Osteen’s head of security. Though that guy asserts they’re going to the jail, Henke notes the “real police” just thought it was funny. “Especially because Mike, our ‘Joel,’ never really dropped character and kept getting approached by ‘fans’ even as we were detained.”