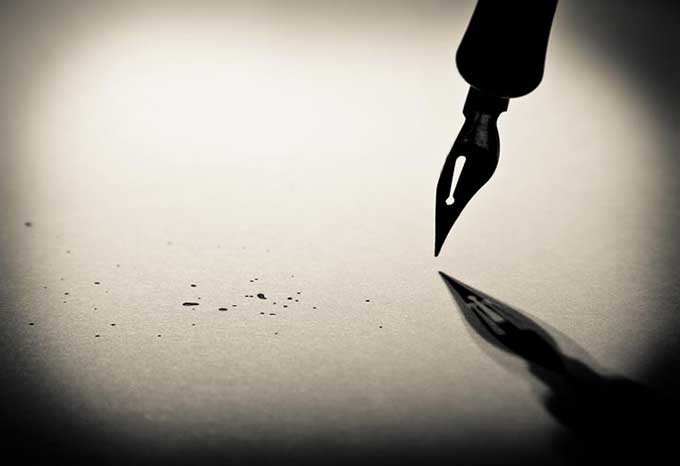 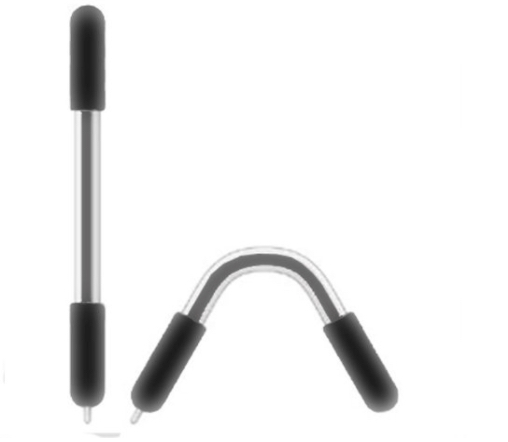 The Flexi-Pen is the writing utensil of choice in prisons because it can't be used to shiv someone. I bet it's fun to fidget with too. Amazon sells a five pack for $13.

The Flexi-Pen is made with a soft rubbery material that bends under the slightest pressure, making it nearly impossible to do lethal damage with it. It's as close to a stab-resistant, non-lethal weapon you can get, while still providing the subject with a workable ballpoint pen to write with.

It's ideal for use in interview rooms, holding cells, and in any prison or jail environment. You go to great lengths to confiscate any potential weapon when taking a prisoner into custody, so why would you want to hand him one afterward? 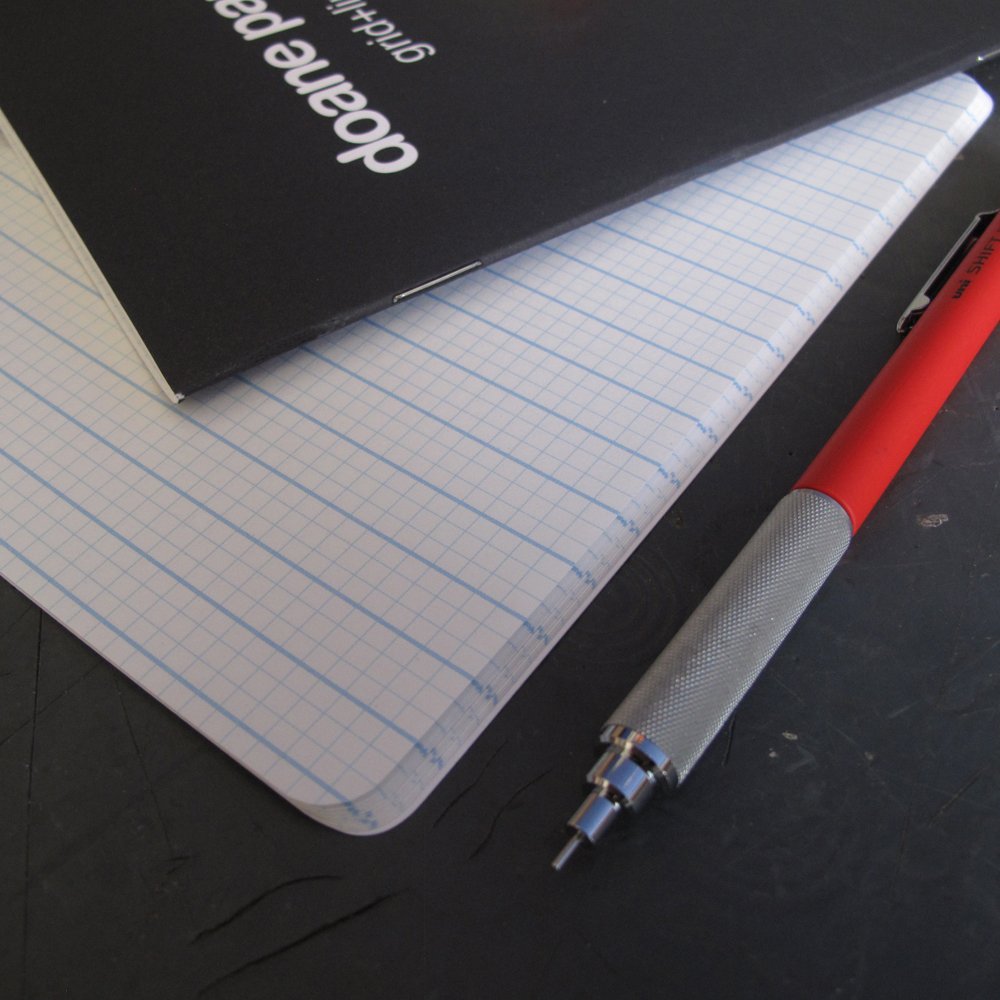 I absolutely love my Maruman Mnemosyne notebooks, but they are big and rigid. These 5"x7" Doane Paper pads have similarly awesome paper, and fit in casual clothes pockets, if you need small they also make 3"x5".

The paper is slightly off-white and is quadruled with a light blue. My Levenger, Pilot and Parker's all glide over the paper very smoothly, tho the Pilot Vanishing point definetly shows its "travel-ness" when compared to the Duo-fold. Ink gets absorbed quickly and only slightly bleeds through unless I write with a heavy hand. I tried various Noodlers and Parker Quink black. Noodler's Blue Nose Bear is almost the same color as the grid lines. 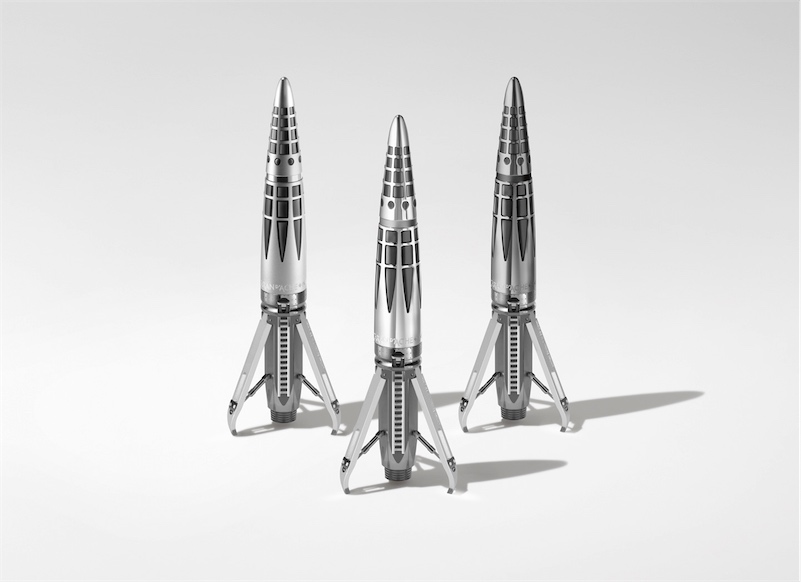 Swiss "writing instrument" manufacturer Caran d'Ache and watchmaker MB&F collaborated to create the Astrograph fountain pen, an otherworldly pen with the astronomical price of $20,000. There will only be 99 of them produced and each includes a small, magnetic astronaut. Do not chew the cap.

This writing instrument is fitted with an ink pump, but may also be used with cartridges. The pen nib is made from rhodium-plated 18-carat gold, available in size M...

The rocket-shaped pen body is rhodium-plated and either highly polished or sandblasted matt, or plated in ruthenium anthracite. The chequered pattern is made from anthracite lacquer...

The base of the "engine" is plated with ruthenium. The stabiliser legs, the joints and miniature ladder are polished, sandblasted, satin-finished and rhodium-plated.

The Astrograph (via Uncrate)

This Pilot Parallel Pen ($(removed)) comes with two ink cartridges (red and blue), but you can a box of 12 cartridges with different colors of ink for $(removed)

Here are some videos of talented people using this pen: Read the rest 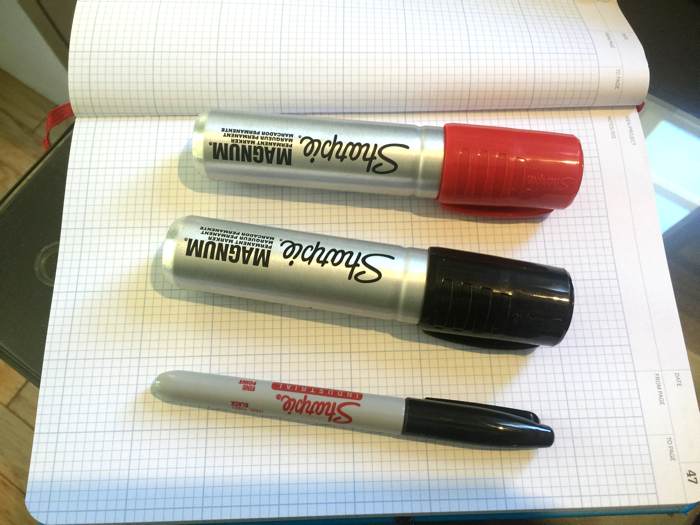 When a regular Sharpie line is too thin, get a Sharpie King Size. When the King Size won't do, get a Sharpie Magnum. I bought a red and a black Magnum for a card trick deck (they also come in blue). It has a chisel point, and its easy to get three line widths with it. If you're an Amazon prime member, you can get one for $(removed)

Dip pens made of copper piping 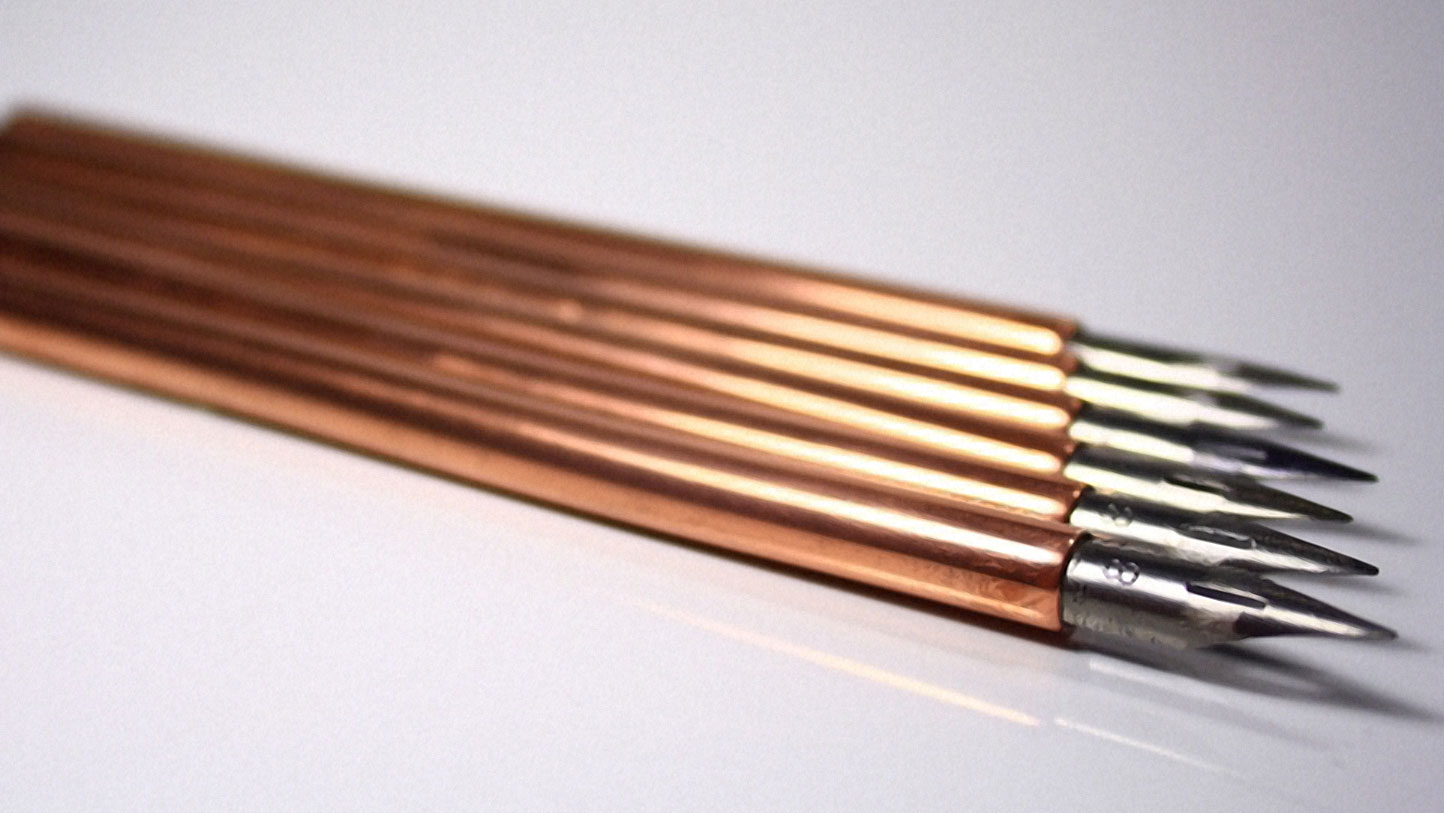 Martin Bolton made these gorgeous copper dip pens with lengths of copper pipe, standard nibs and thermoplastic adhesive. He doesn't seem to have any for sale, but I bet they're pretty easy to make with one of those wee copper pipe-cutting gadgets.

Although there are many types of pens like this available, I decided to design and manufacture my own around an existing nib. The design incorporates a standard available component (the nib) and the re-implementation of waste material (copper tubing) in its assembly. The nib was manufactured in England and purchased locally in South Africa from a stationary supplier. The bodies of the pens are cut from copper tubing from the refrigeration industry (presumably). The copper is then polished to luster, which also removes any edge burrs. The design is straight forward - the nib fits into the copper tube, and gets bonded in place with a suitable thermoplastic adhesive. A test prototype has been in use for several months and proves successful. The copper will tarnish, which can be brought back to luster if desired, with a suitable brass/copper polishing compound. 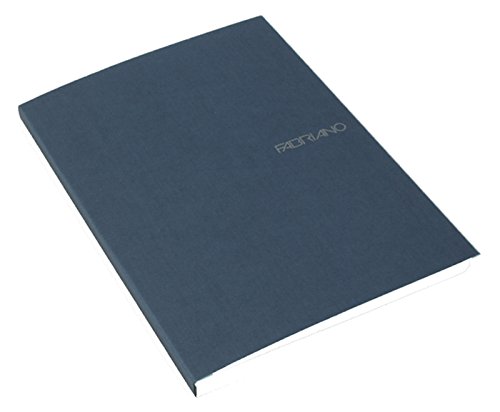 How a retractable ballpoint pen works

I've become a fan of Noodler's Heart of Darkness. This ink is blacker than black. Read the rest

I had to try this $5 knockoff of my favorite pen, the Parker 51.

The burgundy colored Parker 51 has been one of my go to pens for decades. Produced continually from 1941 to 1972, the Parker 51 launched with marketing declaring it "the World's best pen." Currently pens in good working order can command prices in excess of $100, so I had to try this $5 imitation, the Hero Extra Light.

Finish-wise the Hero is looks very similar to the Parker. The top of the cap is a bit more pointed and the Parker's translucent "jewel" is replaced with metal on the Hero. The band where the two halves of the pen fit together is also plastic on the Hero, rather than the metal ring on the Parker. The filling mechanism is nearly identical, as viewed. I have not disassembled the Hero, but likely will, at the very least it appears to be useful as replacement parts for the Parker.

In a writing test the Hero is most definitely not the Parker, however I've been writing with this nib for a long time. The Hero writes well enough, ink flows smoothly and I can certainly use the pen. I am not sure it'll ever acquire the same feeling in my hand as my authentic 51, even with years of use, but for $5 it is certainly close. The Hero strikes me more as a new pen rather than "just not a Parker 51."

If you want something super close to a Parker 51 but don't want to pay collectors prices, the Hero Extra Light is a good call. Read the rest

According to Wirecutter's survey of top pen bloggers, it's the Uniball Jetstream.

My own favorite, the Pilot Precise (pictured above) comes in joint second place.

Of course, there's rarely any reason not to just use a pencil. Read the rest

I've carried a Fisher Space Pen Bullet on and off since I was a kid. ("Write underwater and upside down!") I usually lose them in a matter of weeks, but while I can manage to hold on to one I do appreciate its minimalist design, small size, and great "fiddleability." Of course, the Space Pen is surrounded by some epic marketing and myth. Did NASA really invest millions to develop a perfect pen for astronauts? No, apparently, Fisher had developed the pen technology and later brought it to NASA. Following two years of testing, the space agency bought 400 of the pens at a 40 percent discount. And on October 11, 1968, Apollo 7 astronauts carried Fisher Space Pens, model AG7, into orbit.

Wacom's Inkling is a pen that draws both on paper and on-screen, tracking the artist's linework with 1024 levels of sensitivity. At $200, it's barely even expensive! The Inkling will be in stores by mid-September.

All in one pen, screwdriver, level and ruler

Neatorama has in this metal pen with a level, a screwdriver, and a ruler built-in. All for $15! But ... is it tactical? [Neatorama via Gadget Lab] Read the rest

What the crap is a tactical pen? A pen that kicks ass, basically. And I don't just mean it's "a kick-ass pen," I mean: this pen could literally kick your ass. To death, maybe. But it's also a pen, so it's civilized. No definitive answer on how mighty a tactical pen is in comparison to a sword, but the tactical pen is definitely mightier than the regular pen.

After first hearing about these on Every Day Carry, I decided I needed to see one in person. So I picked one up. Then another. Then did some comparing and contrasting, all scientifical-like. I can now share my results with you. Here's a few that happen to be in front of me as I write this post.

The first one I picked up was the Smith & Wesson Tactical Pen. I figured they make guns and bullets and stuff so they probably could make a pretty bad-ass tactical pen, right? Read the rest