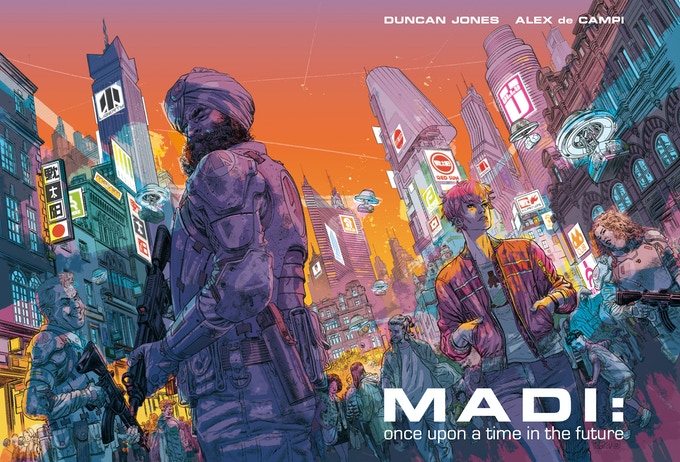 Director/writer Duncan Jones — whom you may know from his hyper-focused, small cast sci-fi films like Moon and Source Code, or the larger-scale Warcraft film that I admittedly never saw — has a new project out in the form of a graphic novel. Madi: Once Upon A Time In The Future is written by Jones and author/letterer Alex de Campi, with a huge team of artists including Ed Ocaña, Pia Guerra, James Stokoe, RM Guéra, Chris Weston,  Rufus Dayglo, Annie Wu, David Lopez, Christian Ward, Matt Wilson, Nayoung Kim, Kelly Fitzpatrick, and many more. Here's a brief synopsis:

Madi Preston, a veteran of Britain’s elite special operations J-Squad unit, is burnt out and up to her eyeballs in debt. She and the rest of her team have retired from the military but are now trapped having to pay to service and maintain the technology put into them during their years of service.   They're working for British conglomerate Liberty Inc as  mercenaries, selling their unique ability to be remote controlled by specialists while in the field, and the debts are only growing as they get injured completing missions. We meet Madi as she decides she’s had enough.  She will take an off-the-books job that should earn her enough to pay out her and her sister, but when the piece of tech she’s supposed to steal turns out to be a kid, and she suddenly blacks out... she finds herself on the run from everyone she’s ever known.

Madi is supposed to the final part of a trilogy comprised of Jones's other M-productions, Moon and Mute; while each story exists independently, they're also part of a loosely connected universe. Read the rest