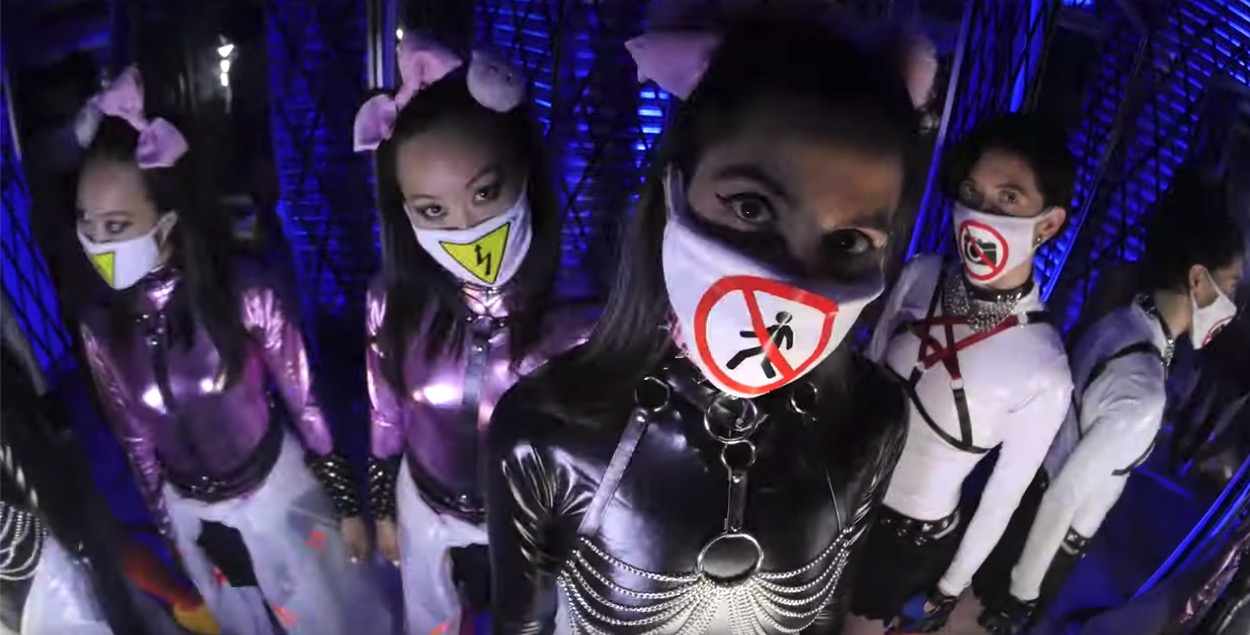 The description included the lyrics:

A little over two weeks ago, Russian feminist protest group Pussy Riot was arrested for crashing the field at the World Cup final wearing police uniforms. They were protesting illegal arrests. After serving 15 days in jail for their "crime," they were released, but then, to their surprise, were immediately arrested again. Looking at this video, it's obvious they weren't expecting this.

Their crime this time? According to The Guardian:

A tweet on Pussy Riot's official Twitter page said they had been charged with "the organisation and holding of public events without prior notice" and could face another 10 days behind bars.

our 4 activists (nika nikulshina, olya pahtusova, olya kuracheva, petya verzilov) are arrested again and brought to the police station; they're charged with article "20.2.2" - "the organization and holding of public events without prior written notice’ - up to 10 days of arrest.

Here they are at the world cup:

“My American friend [Dave Sitek, who produced the song] suggested that this time we do hip-hop, the genre originally rooted in gangster culture,” said NT. “So in the film we have a criminal, the biggest gangster there is in Russia: Prosecutor General Yuri Y. Chaika.”

[Tolokonnikova] plays a rather special version of Chaika. She wears a tight uniform, fishnet stockings, and patent pink high heels that sharpen her long legs. Over and over she sings Chaika’s rules: “Be loyal to those in power, because power is a gift from God, son. I love Russia. I’m a patriot.”

The words come straight from Chaika’s declarations after members of the Russian opposition investigated him and leveled against him allegations of massive corruption and connections with organized crime.

The outlaw Russian activist organization Pussy Riot reportedly chose their name as a clever troll: one of the group's members said she thought it'd be a way to provide a little fun for English-speakers who followed their story. And she was right. Every time I see CNN's Wolf Blitzer say "Pussy Riot," or hear a dry NPR anchor's voice intone those two words, I think I'm going to die laughing. Pussy Riot finally managed to do what generations of feminists before them could not: they normalized the word "pussy."

But I asked Twitter to help me come up with some more "polite" synonyms for news anchors who still wince when they have to say the p-word on-air. Here's the list, some of which are my own, some of which others must take blame for. Read the rest

Members of Pussy Riot, including the recently freed women Nadezhda Tolokonnikova and Maria Alyokhina, were brutally whipped, sprayed and beaten by cossacks representing Russian authorities at the Sochi Olympic Games. The women call the Olympics a political event, and report that they have been harrassed and detained continuously since arriving in Sochi to protest them.

Some other members of Pussy Riot have repudiated Tolokonnikova and Alyokhina and do not consider them to be representatives of Pussy Riot any longer. Read the rest

Joly sez, "The good folks at Tom Tom Magazine captured Pussy Riot's Nadezhda Tolokonnikova and Maria Alyokhina talk about the importance of Pussy Riot's collective structure, being influenced by punk and Riot Grrrl, and a Russia without Putin. February 5th, 2014. Skip to 7:00 for when they start talking. The video begins with Flaming Lips frontman, Wayne Coyne, speaking off camera."

(Thanks, Joly!) Read the rest

When Maria Alyokhina and Nadezhda Tolokonnikova walked out of the Siberian prison camp IK-50, they were defiant. The Pussy Riot members said they wanted acquittal, not amnesty, and an affirmation of the right to protest in Russia. Tolokonnikova gave the press a V-for-victory and shouted "Russia without Putin!"

But afterwards, in a phone interview with the Guardian, Alyokhina described the horrific conditions inside, where women were put to slave labor, and where Tolokonnikova faced daily, punitive forced gynecological exams for three weeks.

Two members of Pussy Riot have travelled to London under a cloak of secrecy to speak to the press about the plight of their bandmates in Russian labor camps. Laurie Penny was one of the reporters who got to interview them in a small, no-photos press conference:

These girls are young. Very young. For their safety, I can’t say how young, but imagine how young you think they might be. Are you imagining it? They’re about five years younger than that. When they arrived I wondered, for a second, who let a couple of moody work experience kids into a clandestine meeting...

And then there’s the cultural backlash - including sexist attacks on what Pussy Riot stand for. "The simplest example is the idea that there’s a [male] producer behind us, or that we must be being paid by foreign governments - nobody can imagine that women themselves are expressing their opinions!" says Schumacher.

"In the Russian mass media they're saying we're stupid girls, not able to think. Among the orthodox believers, in the media, they tell us to stay at home, do cooking, give birth to children," says Schumacher. "And Masha and Nadya are attacked for not fulfilling their roles as mothers." This last is particularly cruel, because not only is it the Russian state that placed Masha and Nadya in Labour camps far from their children, but both have been denied the usual clemency that allows mothers of young children to receive suspended sentences.

A German lingerie company, created a campaign that either co-opts or honors (or both) Pussy Riot.

BB Readers' DIY Costumes: We are all Pussy Riot

Pussy Riot members Maria Alyokhina and Nadezhda Tolokonnikova have been sent to regions known for hosting Russia's harshest hard-labor camps, places that once served as Soviet gulags. The 24 and 22 year old mothers -- who performed a song protesting the Russian Orthodox Church's connection to the Putin regime in a cathedral -- have been sentenced to two years of hard labor. Though the regions to which they've been dispatched is known, no one -- not even their families -- has been allowed to know exactly which prison-camps they are incarcerated in. The Guardian's Miriam Elder reports from Moscow:

"These are the harshest camps of all the possible choices," the band said via its Twitter account on Monday.

...Confusion reigned on Monday as relatives and lawyers tried to assess exactly where the women were sent. Both Perm and Mordovia host several prison camps, some of which comprised the Soviet-era gulag system. Prison authorities declined to comment on the women's whereabouts.

Alyokhina and Tolokonnikova had petitioned to serve their sentences in Moscow, arguing that they wanted to be close to their children. Alyokhina has a five-year-old son named Filipp, while Tolokonnikova has a four-year-old daughter named Gera.

I used to say, "This will not be my war anyway" to my daughter, to my young colleagues, and friends feminists or not: to girls.

We fought in the seventies eighties nineties for freedom of choice, for divorce, for contraception, for women's human rights, against domestic violence, for peace in the world. We fought incessantly, ruthlessly, risking our careers, our private lives, our security and normality. And we accomplished a lot, all over the world; in Italy, in Serbia, in USA, name it.

The second wave of feminism was standing on the shoulders on the suffragettes from the beginning of the 19th century, who often gave their lives for women's rights. Then I got tired, and not me only. The world took a bad turn, not only in Serbia during the nineties, but everywhere after September 11!

The Globalization of Balkanization put at stake all the conquests of women and not only of women: terrorism, and raging war on terrorism, brought us police right-wing technocrat dystopian states where human rights became just another word for nothing left to lose. I told my young girls then: you must fight it now, this is your world, the one we inadvertedly left you. Learn how much you have inherited from your grandmothers, don't take it for granted because you are may well lose it, step by step, bit by bit. To the church, to the state, to the financiers. Read the rest