Raccoon climbs up side of skyscraper as world watches with bated breath, then is captured and released to wild 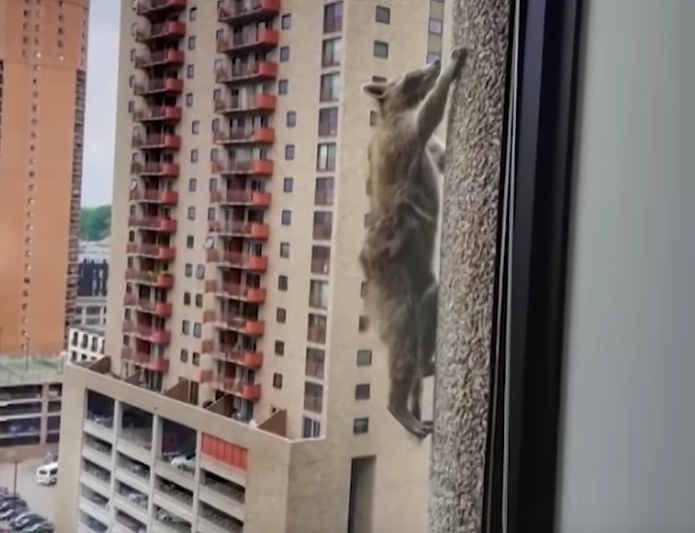 A raccoon in Minnesota got its 15 minutes of fame after climbing up the side of a skyscraper Tuesday. The world watched online as the adorable little trash panda scaled more than 25 stories of St. Paul's UBS building.

It all started when maintenance workers at an office tower in downtown St. Paul, Minn., found the raccoon curled up on a ledge on Tuesday afternoon. After it was roused, the creature took off — and scaled the side of the building. An audience gathered on the street below — and on Twitter — to watch the hourslong attempt to stop it. While some cheered for the animal, others warned that they were vicious.

“Do not be fooled by their attempts to be cute,” one user wrote. “This building climbing scheme was just part of their nefarious plot to take over the world. Stay vigilant!”

Officials managed to bait and trap the raccoon, and they released it into the wild.

Earlier, though, the outcome was far from certain.

The raccoon was spotted more than 20 stories above street level, in a downtown escapade that our colleagues at Minnesota Public Radio tracked closely — it was, after all, just across the street from them, giving them front-row seats as the animal avoided death and capture with equal aplomb.

Dubbed the #mprraccoon on Twitter, the raccoon drew thousands of breathless observers as it scampered, scaled and explored its unlikely high-rise habitat. Its occasional naps were followed closely, analyzed for clues about its mental state, hopes and dreams.

Attacked by a rabid raccoon and looking to her phone for answers, Rachel Borch noticed she'd dropped her cellular device near a puddle. Thinking that a drowning might stop the animal, Borch held it under until it was dead, dead, dead. Fear took over, and Borch ran home. Read the rest

Wayland appears to be a bit of a wet blanket when it comes to having fun.

Raccoon tries to 'save' brother from refreshing swim in pool

Waylon the raccoon sure would feel a lot better if his brother Willie were back on dry land.