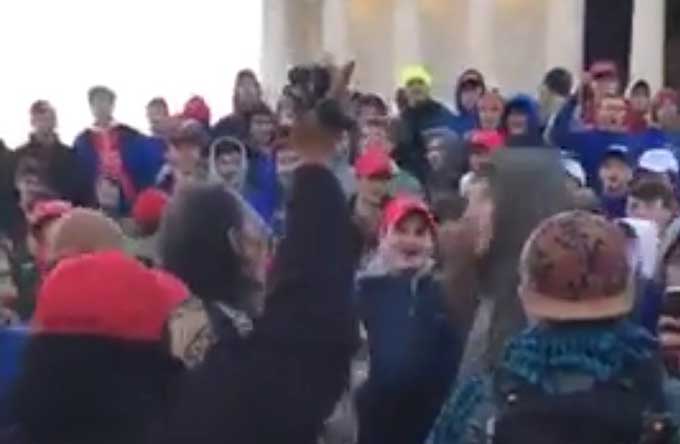 UPDATE 1-20-19: This story appears to be more complex than what was seen in the video above and from news reports in the Washington Post, CNN, New York Times, and other major news media. After watching a much longer video that shows the lead-up and aftermath of the incident, it doesn't look like the high school students were harassing the Native Americans as was reported yesterday.

James Martin, a Jesuit priest, an editor at large America Magazine has excellent insight into the complexities of this still-unfolding story, which he wrote in the form of a Twitter thread:

Thread by @JamesMartinSJ: "Re : I will be happy to apologize for condemning the actions of the students if it turns out that they were somehow acti […]" #CovingtonHighSchool

I'll continue to update this post as new information emerges.

Kentucky's Covington Catholic High School's Twitter, Facebook and Instagram accounts are on lockdown this morning after a video was posted that shows a mob of students intimidating a Native American elder in front of the Lincoln Memorial in Washington DC. Read the rest