Toronto says park stairs would cost $65k to build, man makes them for $550 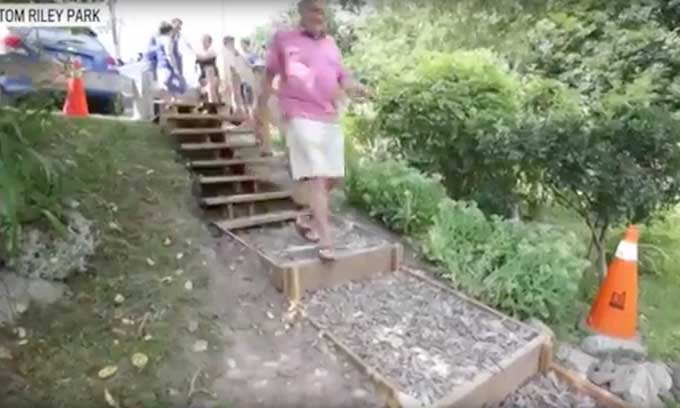 Toronto officials are hopping mad that a rogue DIYer built a flight of stairs in community park for $550 instead of allowing the city to contract it out to a builder at a cost of $65,000-$150,000. Adi Astl, a retired mechanic, said he decided to build the stairs because several neighbors had taken a tumble down the steep path leading to the park. Park visitors were able to enjoy the stairs for a short while until the city taped it off. The city says the stairs will have to be replaced with stairs that meet regulations.

Obviously, the city needs to do something about this for insurance reasons alone. But I'll bet they could work with Mr. Astl to make a great, code-complying flight of stairs for a lot less than $65,000.

Astl says he hired a homeless person to help him and built the eight steps in a matter of hours.

Astl’s wife, Gail Rutherford, says the stairs have already been a big help to people who routinely take that route through the park. “I’ve seen so many people fall over that rocky path that was there to begin with,” she said. “It’s a huge improvement over what was there.”

Astl says members of his gardening group have been thanking him for taking care of the project, especially after one of them broke her wrist falling down the slope last year.

“To me, the safety of people is more important than money,” Astl said. “So if the city is not willing to do it, I have to do it myself.”