CDC planned to drop off coronavirus cruise passengers at a shopping mall Cheesecake Factory, when they got out of quarantine

In San Antonio, Texas -- Federal health officials were planning to drop off some of the evacuated cruise ship passengers at a local shopping mall, after the coronavirus-exposed patients got out of a two-week quarantine at a Texas air base. This is one reason the city declared a public health emergency over COVID-19, said a city spokeswoman on Tuesday. Read the rest 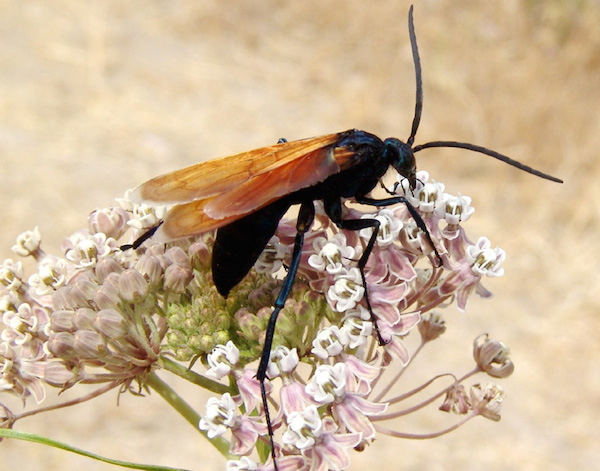 A few years ago the most horrific insect I've ever seen chased my family while hiking in Los Angeles. Its dark bluish wasp-shaped body was gigantic, its stinger visible even from afar. And it was grotesquely tall when standing on its long spindly legs. But mostly it was flapping its alarmingly bright orange wings while charging after us. Luckily we made it back to the car unharmed (it actually lost interest in us after a minute or two). We later found out via Google that this intimidating creature was a tarantula hawk, a type of spider wasp, and that its sting is considered one of the most intense, agonizing insect stings in the world.

I was reminded of the tarantula hawk after hearing this week that they've been swarming San Antonio, TX after all the rain they've had. Residents have been spotting them in large numbers every day. Although they look menacing, Texas entomologist Molly Keck says they are actually more docile than they look, and probably won't sting unless provoked. Haha, maybe, after all, the aggressive-looking tarantula hawk we saw was merely flying in the same direction as us. Here are 6 facts about tarantula hawks posted today on My San Antonio.