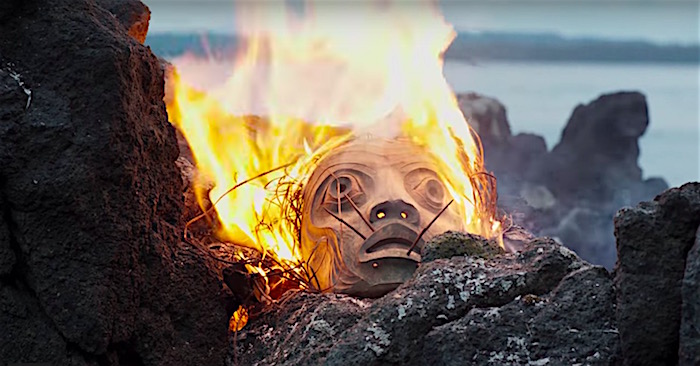 Sgaawaay K'uuna, or Edge of the Knife, is the first feature film to portray the Haida – a group of people from Haida Gwaii, aka the Queen Charlotte Islands (off the west coast of Canada's British Columbia). It's also the first film in which the characters speak entirely in Haida, a language which only 20 people in the world speak fluently (even though the Haida population is a few thousand, according to The Guardian). The actors had to learn the language in order to understand their lines.

The film, set on Haida Gwaii in the 19th century, is based on an old Haida myth about a man who survives an accident at sea, only to become so weakened that he is taken over by supernatural beings.

It is part of a wider push to preserve the Haida language, including a new dictionary and recordings of local voices.

Edenshaw said Haida uses a lot of “guttural sounds and glottal stops” and that actors needed to learn it because it differs from English, let alone other languages: “When you upspeak to denote a question in English, that doesn’t exist in Haida. There is an upspeak, but the questioning portion … appears in the middle of the sentence.”

That was among the details that his cast of non-Haida speakers had to learn over many months before the shoot.

The film will be released in April. Read the rest