The Microwriter, a tiny chording word processor from 1984 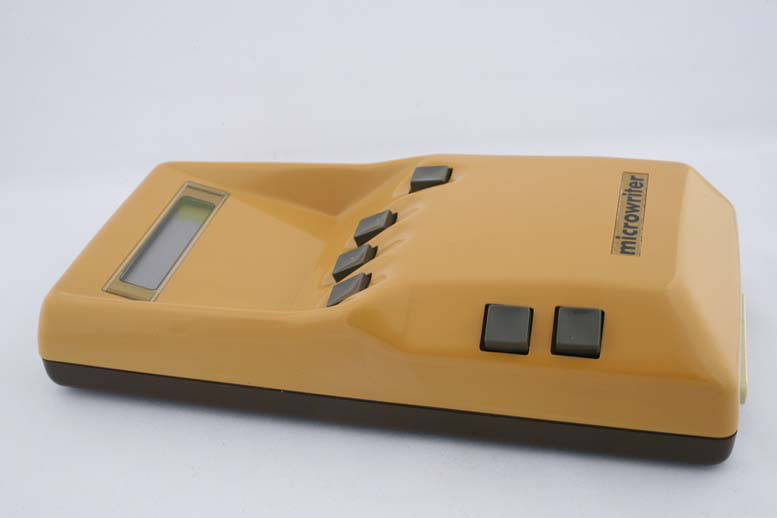 Back in the 80s, the inventor Cy Enfield created this fascinating device -- a six-button "Microwriter" where you'd chord combos of buttons to produce the entire alphabet, letting you jot down notes on the go.

Microsoft's Bill Buxton calls it "the world’s first portable digital word processor" (the front-page photo for this post is from Buxton's hardware collection) and Open Culture wrote a terrific piece about the Microwriter a few years ago, citing from a 1984 interview Enfield did with NPR, discussing his "aha" moment:

“It occurred to me that ... it would be possible to combine a set of signals from separate keys, and therefore you could reduce the total number of keys. But, of course, this involved the learning of chords… difficult to memorize… But how do you make these chords memorable? And, one day, staring at a sheet of paper on which I was drawing a set of five keys in sort of the arch formed by the finger ends, it occurred to me, ah! if I press the thumb key, and the index finger key, anybody can do this just listening now, press your thumb key and your index finger down and you’ll see that a vertical line joins those two finger ends, a short vertical line. There is an equivalence between that short vertical line and one letter of the alphabet. It’s the letter “I.”

Buxton's site has some scans of the gorgeous user's manual, including this one:

There are chording keyboards these days, most notably the Twiddler, and stenography tech. Read the rest