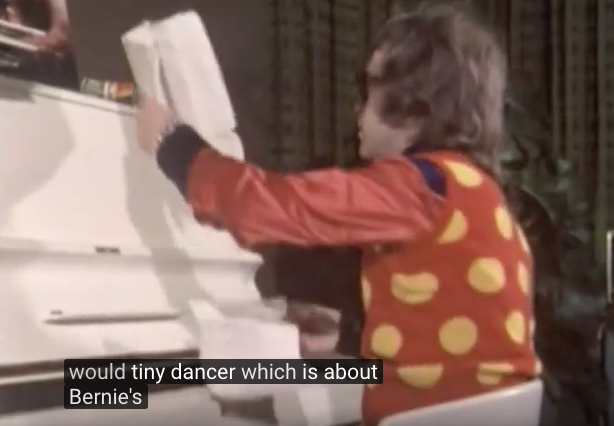 Here's some behind-the-scenes footage of Elton John in 1970 working out the harmony for what he describes as "the song about Bernie's girlfriend."

"Bernie" is Bernie Taupin, the song's lyricist and the song is Tiny Dancer. Taupin's girlfriend at that time was the band's seamstress Maxine Feibelmann, a dancer who later became Bernie's first wife. In a 1973 Rolling Stone interview, Taupin acknowledged that the song is about her. When asked directly, he stated, "That's true, yes." The song is even dedicated to her on the album, Madman Across the Water.

However, Taupin later stated that the song was about all the women he encountered in California in those days:

“We came to California in the fall of 1970, and sunshine radiated from the populace,” he said. “I was trying to capture the spirit of that time, encapsulated by the women we met–especially at the clothes stores up and down the Strip in L.A. They were free spirits, sexy in hip-huggers and lacy blouses, and very ethereal, the way they moved. So different from what I’d been used to in England. And they all wanted to sew patches on your jeans. They’d mother you and sleep with you–it was the perfect Oedipal complex.” Why “tiny,” then? “Well, that’s poetic license, although they were all petite and lithe. And ‘Tiny Dancer’ sounds better than ‘Small Dancer,’ or ‘Little Dancer.'”