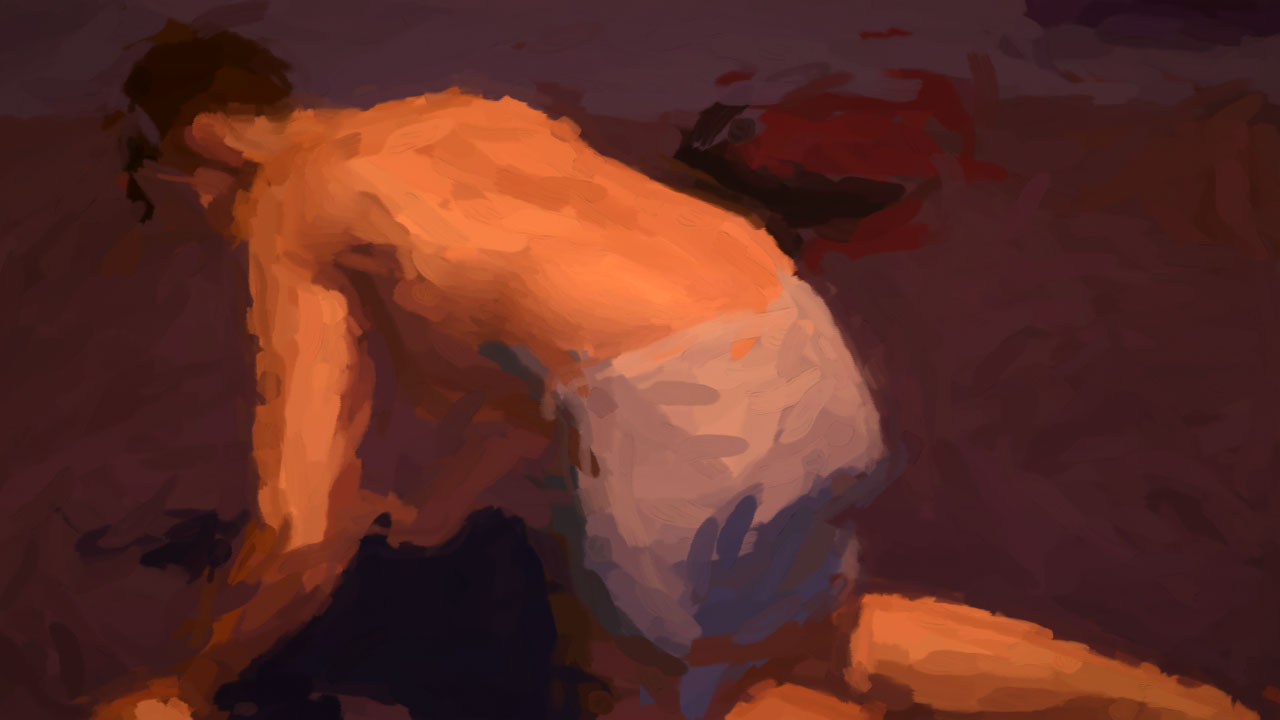 Unconventional titles that focus on consent, care, and collaboration offer a softer future—even if the spanking is very, very hard.

My hand connects with ass cheek, sending a jolt through the man on all fours in front of me. I giggle a little—I'm not totally used to this. I pull my hand back and send it forward again, harder this time, and he bucks, a satisfying squeal slipping from between his lips. Later, I'll rub his back and tell him how good a job he did, tell him all the things he loves to hear after a scene.

No score, no contest, no real win conditions—just a single, meaningful interaction between me and my fictional partner. This is Robert Yang's Hurt Me Plenty, a videogame about spanking—but also, on a much deeper level, about consent, responsibility, and care. And it's just one of a number of independent games that's exploring these topics. In doing so, Hurt Me Plenty and other works are pushing players to reconsider their relationships to games, themselves, and one another.

On a deep level, most video games are competitive. As players we’re generally conditioned to expect friction and challenge. Obstacles are usually either logical or reflex-based: maneuver a falling block into an open space, marshall your virtual resources to overcome enemy armies, or avoid a hail of alien lasers as you duck behind cover. But why not question the conventions behind these themes? Are they necessary?

As a designer, I'm interested in exploring nontraditional uses for games. That's why I started Soft Chambers, a project about making games as vehicles for emotional skill-building and expression. For instance, my game Take Care charges players with caring for a pixelated character via simple touch gestures.

But it only provides the player with minimal guidance on how to do this, because human beings don't come with instructions. Putting players into situations where they're asked to care for another human character, a peer, is still pretty unusual for digital games.

There's a lot of reasons why games about giving or receiving care aren't more common. It may be easy to chalk it up to tech issues, but those kinds of arguments—you know, how it’s supposedly easier to simulate a bullet than a hug—obscure deeper social issues. Caring is feminized labor, dismissed as not particularly valiant, interesting, or worthwhile. Games where the main project is caring for another character—usually in the form of human-animal relationships—are generally dismissed as “casual". These are not neutral judgements—they're informed by the gendered qualities we attribute to different kinds of interactions.

Increasingly, though, independent artists are exploring dynamics that aren't competitive, and are creating stories that are more about intimacy than conquest. In Hurt Me Plenty, the player takes on the role of a top—the actor delivering some sensation—in a spanking scene. Yang designed the game to run with the motion-sensing Leapmotion device, so the player interacts with the game by literally making a slapping motion with their hand.

But the game doesn’t hurl players right off the spanking deep end. Before that, the player shakes hands with their prospective scene partner in order to negotiate the parameters of the scene—elements like the desired intensity, and the safe word that the bottom can use to end it, all via motion gestures. After the spanking segment ends, the player provides care for the other character by massaging his back and shoulders while he discusses his feelings about the charged physical interaction.

I played the game with my laptop's touch pad rather than a Leapmotion, but even so, I felt an intense sense of responsibility and care towards this fictional character. Most games encourage us to experiment, to test the limits of their systems, to try to find breaks or inconsistencies in their rules. But I didn't approach Hurt Me Plenty that way. Instead, I tried my best to take care of this virtual man, whose name I didn't even know. Between the physicality of the interactions and the way the game invests you with a sense of power that comes with responsibility, I felt a connection I rarely feel with non-player characters in videogames.

And Yang is serious about exploring this sense of responsibility and connection. While I didn't push my bottom very hard when I played, players who continue to inflict pain on him past his use of the safeword find that the game becomes unplayable for two to twenty days as their bottom recovers and rebuilds trust in the player. For Yang, this was a means of moving away from a proprietary relationship between the player and the game as a piece of software.

The non-player character may be just an unsophisticated AI—but this rejection of the player's ownership over it by locking her out in response to a violation of their negotiated boundaries goes a long way towards making the relationship feel weighty and meaningful.

I tried to create this same kind of dynamic in my own game, Consensual Torture Simulator. Whereas Hurt Me Plenty uses motion-sensing technology to create a sense of connection, in CTS I set up the narrative of an established romantic relationship, to encourage the player to invest in their interactions with a character.

CTS opens with a non-interactive negotiation scene where the player character and her partner agree to an impact play scene, where to goal is to make the bottom character cry. The player then has her choice of a range of tools, from canes and floggers to her fists and nails, to work her partner up towards consensual tears. But the player has to keep an eye on her own body, too—vigorously inflicting pain tires her out too, so she needs to take periodic breaks to pace herself.

I hoped that players would take the narrative seriously, but the extent to which they did surprised me. I had a number of people tell me that whereas in any other game they'd push the limits, try to discover a fail state, or play with the game in a detached way, in CTS they felt too strong a sense of responsibility to the fictional character to do that. Instead, they strove to take care of her as best they could, often ending the scene and the game long before things got too intense. Whoa.

Beyond these kinds of player-computer interactions, designers are also experimenting with multiplayer games that encourage players to practice active consent and care for one another.

Loren Schmidt and Jimmy Andrews' Realistic Kissing Simulator is a two player game where players manipulate inhumanly long, alien tongues in a way that totally belies the straight-faced title. But like Hurt Me Plenty, RKS first presents the player with a negotiation scene. One player asks if the other would like to kiss, and the other is free to accept or reject the offer. If the player accepts, the game goes ahead. If not, the game ends in the same way that it would when the players finished kissing.

Crucially, this isn't a static cutscene—it's an active part of the game involving both players that portrays consent and communication as at least as important as the acts that come afterwards.

Similarly, In Tune, a digital installation game by Tweed Couch Games [previously covered here at Offworld], has players negotiate and communicate physical boundaries with their partner, using one another's bodies as the game's controller. I saw it played at Indiecade East in February, and the public exhibition is a really compelling experience. By using familiar and nonthreatening conventions of videogames, In Tune gets people to reflect on their experiences of space, touch, and intimacy.

Works like Hurt Me Plenty, In Tune, and Realistic Kissing Simulator depart from our traditional view of games as sites for competition and domination, and ask us to imagine new possibilities. Like: maybe not all games exist to be owned, beaten, or completed. Maybe digital games can be used to facilitate care relationships and to build emotional skills. And maybe we can use games to imagine the kinds of worlds we'd like to inhabit, where care is a more celebrated and widely practiced activity.