You have 20 minutes before the sun blows up 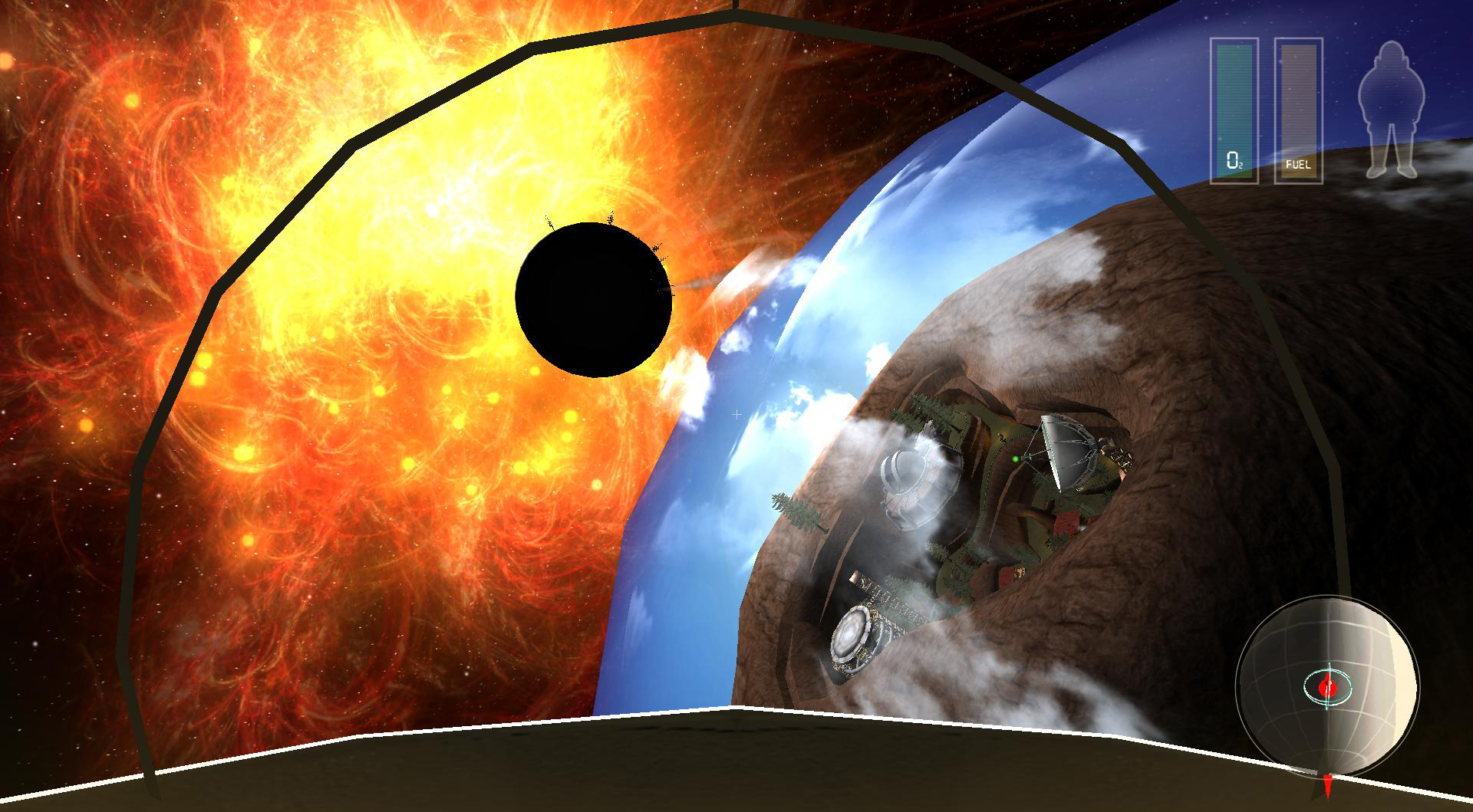 You have 20 minutes before the sun blows up

Outer Wilds begins around a fire, like so many of the best stories do. When you step towards the crackling flames, you're offered a surprisingly whimsical option: press X to roast a marshmallow. Why not? You transform the sugary orb into a ball of flame. When you step back, however, you see that the world is about to get far, far bigger than a campfire, or even a planet. You're sitting at the base of a rocketship, as a nearby engineer explains that you're the astronaut about to blast off into space.

All you need are the launch codes, and after a leisurely detour through your home planet where you pick up a few essential piloting skills, you suit up, buckle in, and launch your craft triumphantly into space, ready to explore the wonders of the universe.

Then the sun explodes.

The first time I found myself engulfed in the searing light of a collapsed star, I felt confused. Did I do something wrong? Was this the cosmic punishment for the hubris of reaching for the stars? But instead of dying, I found myself right back where I started, standing in front of a campfire 20 minutes before the end of the world.

The second time around, however, you'll remember the launch codes. And if you're smart, you'll head straight for the rocket, and use your fleeting time to explore every crevice of the brightly colored planets in your solar system, before the supernova claims you again and again and again. After all, when you've only got 20 minutes to live, you've got to make them count—to experience something that makes each trip worth the journey before it all gets wiped away.

If you're sufficiently sold on Outer Wilds, then stop now, download the game for free, and travel to exciting new worlds and roast marshmallows on them before the sun blows up. As you'll soon learn, exploration isn't just half the fun: it is literally all the fun, and the game's quirks are best discovered on your own.

Although the graphics are nothing to write home about up close, the true power of Outer Wilds lies in the casually spectacular moments that occur as the universe spins around you on its various axes, and how its sense of scale allows you to move from the intimacy of two people by a fire to the immense and occasionally frightening grandeur of space.

When you first see the Dark Bramble, it looks a bit like a galactic briar patch: a massive tangle of living thorns hung at the outer rim of your solar system. It's hard to tell how big it really is until you draw close, the way it transforms from a charming miniature to a looming fortress that fills the sky.

For an instant, before you plunge into the Bramble, you get a glimpse of several enormous anglerfish swimming in its depths, and then fog covers everything. If you're not sure what an anglerfish is, click this link. There are gigantic versions of that waiting for you in the mists, their dangling lights cutting through the fog like luminous sirens designed to lure your ship into their waiting jaws.

Not all the lights lead to certain death; some lead to important discoveries. It's up to you to figure out which is which. It's difficult to see more than a few feet in front of you inside the fog, and easy to wander in circles, feeling your way along the spines of the brambles like enormous, looping handrails. There were moments I felt very small and very fragile, floating there half-blind so far from home. But it was exciting, too, especially when I dared to leave the safety of my metal hull and venture out, the light of an anglerfish bobbing behind me at an indistinct distance. Was it staying still, or drawing closer?

There's a song that plays when the end is nigh, an electronic dirge that sounds like a very emotional moment in a retrofuturistic '80s movie. Over time, you'll instinctively recognize it as a death knell, one that will either send you scrambling to finish what you started or encourage you to kick back and find the best possible view for the end of the world.

When I found myself in the Dark Bramble as the first mournful notes of the song begin to play, I strapped on a jetpack and headed through the fog towards the nearest light. As the shock wave of the supernova neared, I threw myself into the open jaws of an anglerfish, and felt a sense of satisfaction. This was something new. I had never done this before.

Like so many campfire tales, Outer Wilds is worth experiencing again and again, not just because the repetition is pleasurable, but because every time you return, you find something new, a slightly different way to tell it. Plus, even if you've visited every inch of the galaxy, you haven't necessarily visited it at the right time.

As you explore the various planets in your solar system, you'll start to notice something crucial: things change. Visit a location early in the 20-minute cycle, and it could look very different than it does later on. Your closest neighbors, a pair of interlocked planets known as the Hourglass Twins, share an unusual tide; an enormous column of sand flows between the two, filling one planet and emptying the other. Explore one of the Twins early and you'll find its surface riddled with chasms; explore it later, and its mysteries are buried in the sand.

There's an archaeological element to your discoveries as well, one that poses questions that are both cosmic and cultural. As you uncover more ruins—and more secrets of the Nomai, an ancient alien race that once lived in your solar system—you may find yourself hopping from planet to planet not just to see what you can see, but to sift through the dust for more answers, like a space-bound Indiana Jones who's all shovel and no whip.

Although it recently won the Grand Prize at the Independent Games Festival, it's important to note that Outer Wilds isn't exactly done. Important narrative pieces of the game, which started a USC master's thesis project by Alex Beachum, are still missing as it readies for a commercial release. Although Beachum promises that the final version of Outer Wilds will offer a "completely fleshed-out version of the overarching mystery," one of the unexpected pleasures of playing the unfinished game is the feeling that the only true objective is reaching whatever bright light you set a course for.

As you explore, deeper questions emerge: What exactly is the "quantum moon," and why does it move to a different location every time you look away? Does the rapid, post-mortem rewind of each life you lead have something to do with the "memory persistence" the aliens mention in their secret logs? And perhaps most importantly, is there any way to save the world?

If there is, I don't think you can find it in the current version of the game. And the more I think about that, the more I prefer it. It's easy, sometimes, for games to feel like achievement checklists, an experience that can be boiled down to bullet points on a walkthrough. Outer Wilds resists this impulse by offering you nothing but wonder, no goals beyond seeing something strange or beautiful in the distance and simply flying towards it. For now, at least, Outer Wilds is a story about the end of the world that never ends, and part of me hopes it never finishes.

As you traverse the many worlds of Outer Wilds, you'll occasionally meet other astronauts, each of them seemingly stranded on a distant planet with no way to leave. But instead of panicked, they seem relaxed, stretched out in front of their own little campfires without a care in the world. When you ask them if they need help, they shake their heads. "As long as I want to be here, I'm not stranded."

(Outer Wilds is currently available on both PC and Mac; either way, using an Xbox 360 controller is highly recommended unless you really enjoy flying into the sun.)