A comic about what happens when a magical girl team disbands 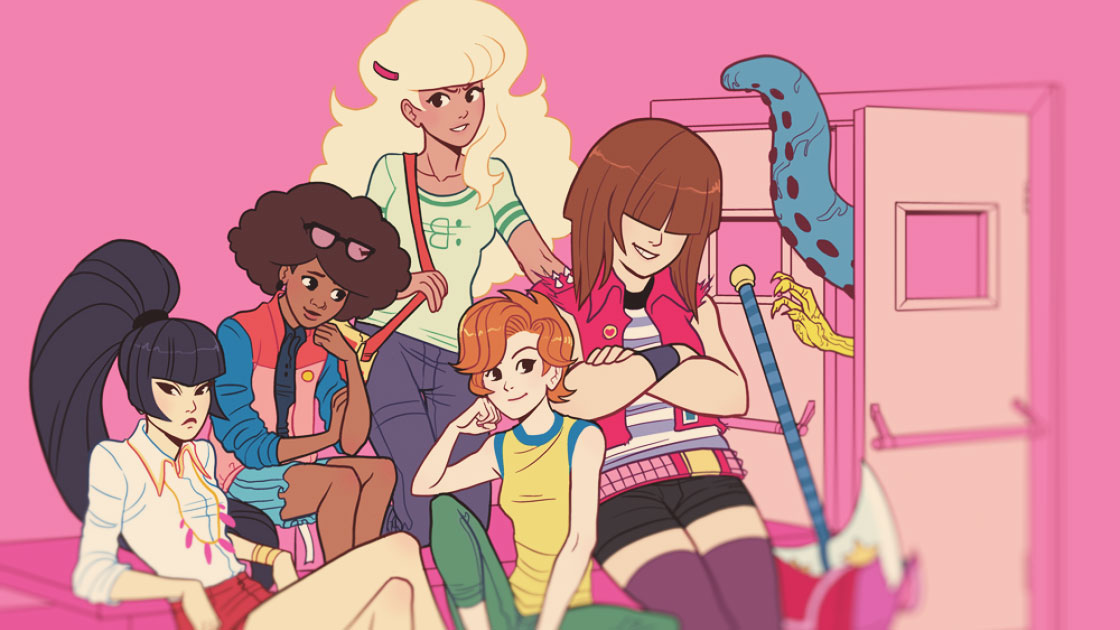 A comic about what happens when a magical girl team disbands

What's a team of cosmic high school superheroines supposed to do after they defeat the villain, go back to their normal lives, and start growing apart?

Anyone who grew up around Sailor Moon is probably familiar with the concept of magical girls: a team of young women—often in junior high or high school—who transform into superheroines with fantastical powers to fight evil. But what happens to a magical girl team after they defeat the bad guy, go back to their normal lives in high school, and start growing apart?

That's the premise of Zodiac Starforce, an upcoming comic created by artist Paulina Ganucheau and writer Kevin Panetta. All of the heroines are 16-year-old girls, each with her own astrological codename: Emma (Gemini), Savanna (Pisces), Kim (Taurus) and Molly (Aries). Rather than telling the story about how the team got together or introducing the great evil they have to defeat, Zodiac Starforce begins after they've already won.

It's been two years since the girls received their power from an goddess named Astra and destroyed the villain Cimmeria; the team has since disbanded, and like a lot of friends do over the course of high school, they're starting to find themselves drawn to different interests and heading in different directions.

"All my best friends now are people I've met in the last five years. And I think it's that way for a lot of people, so it's great to show it in a story you usually don't see it in," says Ganucheau. "It's based in a more real reality than, say, the 'friends forever' mentality that is all of Sailor Moon.

Although they cite inspirations like Buffy the Vampire Slayer, Legend of Korra and Sailor Moon, Ganucheau and Panetta say Zodiac Starforce started out as something very different: a science fiction tale called Cadets about young adults training to fight aliens at a military school in space. The duo originally imagined Zodiac Starforce as the anime series that the characters in Cadets liked to watch, and while Cadets never ultimately went anywhere, the idea for the magical girl meta-show endured.

We learn about the girls not through traditional origin stories, but through how they react when a monster appears for the first time in years. Kim can't wait to get Zodiac Starforce back together—and rekindle their close-knit friendship—while Molly is convinced that she's just clinging desperately to the past. Emma, the team's former leader, has her own uncertainties about returning to a life of astral battles, especially since she's still reeling from the death of her mother.

In the grand tradition of so many high school stories, everything comes to a head at a house party. "It's the most high school thing in the world to me," says Panetta. "So much happens when you get a bunch of people together at a house. It seemed like the perfect location for our first issue.
And of course your mortal enemy is always going to be at the party too.

And magical metaphors for the trials of the teenage years abound. Their mortal enemies are, of course, the mean girls, lead by queen bee Diana who arrives wearing a halter top and what I assume are evil ombre highlights. And she's got an unexpected new recruit in tow: Alice, the girl who went missing a day earlier. Turns out she's not missing at all; she's just joined another more popular (and more evil) clique, and left her old friends in the dust.

The first issue also teases several romances for the girls, including a charming guy named Luke who Emma meets at the house party. Not all the girls are that lucky, however; there's also Savanna's side-eye provoking boyfriend Darren, who can't even be bothered to look up from his smartphone while demanding that his girlfriend bring him a drink. When the other girls suggest that maybe Darren is a jerk, Savanna explains that you know, he just acts like that sometimes.

"I've dated that asshole," notes Gancheau. "It's not a good time. Savanna, run!"

The debut issue of Zodiac Starforce debuts on August 26th in both digital and print, although you can preorder it now. For a sample of the magic girldom to come, check out the six-page preview below, including the Books-A-Million exclusive variant cover from Lumberjanes creator Noelle Stevenson:

While Cadets may never become a comic book itself, Ganucheau also says we haven't heard the last of it, and that perhaps the roles may reverse, and it might find some sort of cameo role in Zodiac Starforce.