Mann's Pictorial Dictionary and Cyclopedia – The most miscellaneous miscellany out there 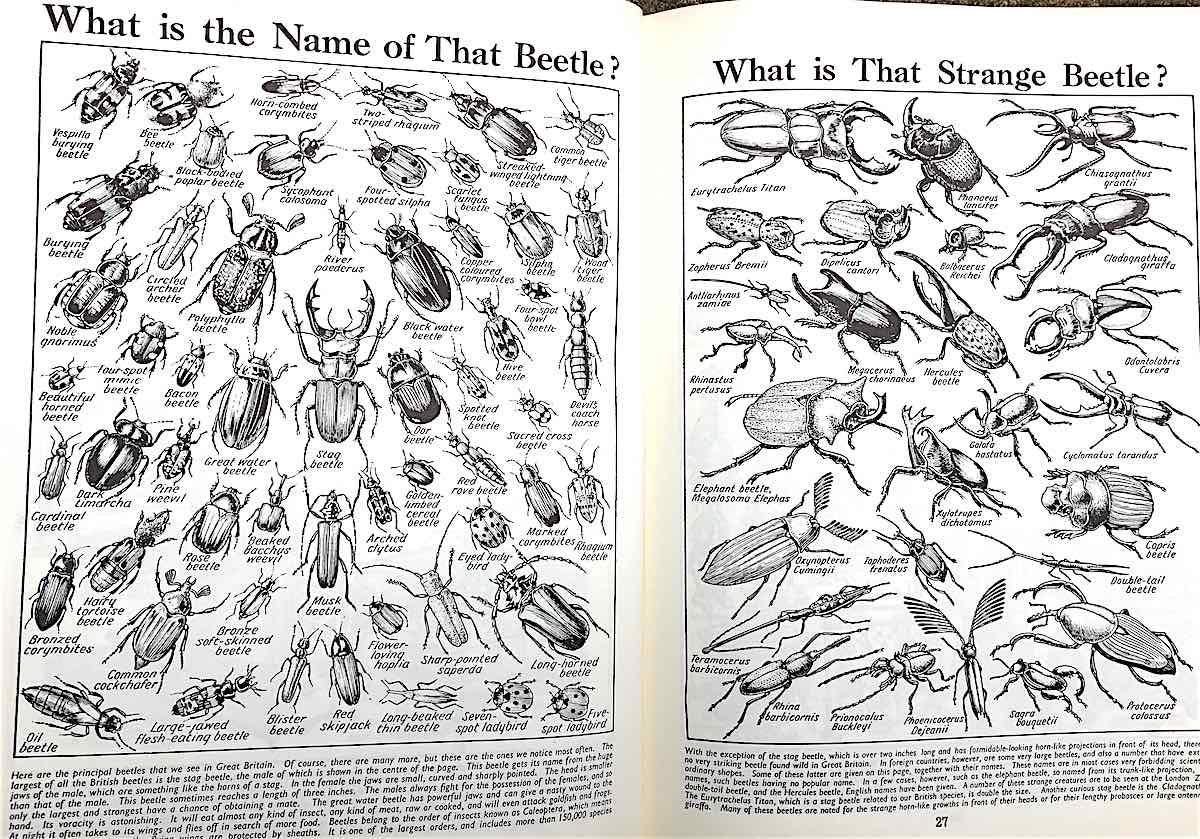 What are the different parts of a knife called? How about the parts of a plough? Does anyone know what kind of mousetrap this is? What do Eskimo ice scrapers look like? I’ve got this chrysalis here — what kind of butterfly or moth will emerge from it? Can anyone show me the difference between a bath tap and a double flexible tube cock? How about a White Persian versus a Manx? How did the piano evolve? What kind of ship is that sailing out of the harbor?

All of these questions and a ridiculously large number more are answered in Mann’s Pictoral Dictionary and Cyclopedia, 240 pages of the most miscellaneous miscellany out there. Each page poses a not-entirely-naturally-worded question at the top, then answers it with illustrations. If we believe the foreword of this 1960 edition, the original book was found in a bombed-out library in England shortly after WWII. One illustration shows a woman’s hairstyle from 1920, while another list, "To Which Country in the British Empire Does That Badge Belong?” includes Kenya and Gold Cost which, if I know my British history (note: I do not), suggests the book was published sometime between 1920-1957.

I’d owned this book for several years before I realized that the pages are not random, they’re alphabetical (as long as you can figure out what category the page has been classified under, which is not always clear). This leads to delightful transitions like going from cat’s cradle games, to cattle breeds, to oak chairs, or from “What Bible Fruit is That?” to “Examples of British Game Birds.”

The British dial is set to 11. “What is the Name of That Sedge? The Chief Species Growing in Britain” is a two-page spread on grasses. “What is the Meaning of Those Badges Worn by the Boy Scouts?” asks another page. “Which British Owl is That?” — it turns out that “Ten owls are found wild in England, and by means of these drawings it will be possible to identify any owl that may be seen.” Identify your raptors with confidence, Britain! It’s out of print, but used copies can be found at the link above.

Paris-based Yeaaah! Studio released this terrific homage to 80s clip art and comics, stringing together a bunch of animated gifs to tell a story of modern romance.

Phil Are Go has performed the vital service of close-cropping the finned beast from this 1959 Lincoln ad, for your clip-art pleasure, but not before adding a much-needed third axle. A vanilla two-axle model is also available. 1959 Lincoln – Fab one and a half.