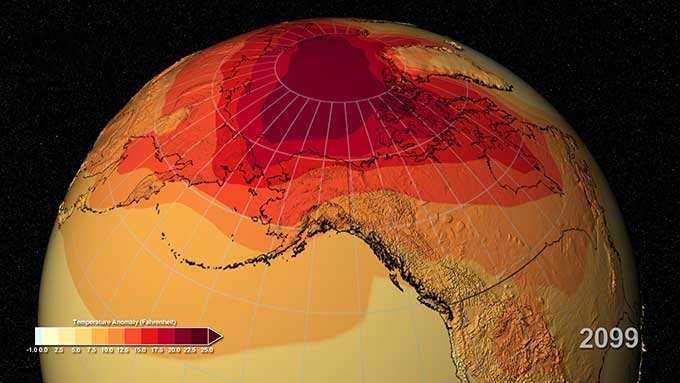 Not since the Reagan era cold war with Russia has apocalyptic awareness been so forefront in the public’s mind. Disturbing incidents ranging from nuclear football Facebook selfies to alarming North Korean military activity now accrue weekly. Sometimes hourly. What can one do besides scroll through Twitter before bedtime and let the news populate our nightmares?

The distractions and details are addictive: political murders via improv and a spray bottle, daily revelations of Russian infiltration in US elections and government, and today the president is yelling at Sweden. Tomorrow it might be Ireland. Who knows. We watch the global breakup like helpless children realizing that mom and dad are really getting a divorce. Right now, the sitting US president is not even welcome in the British Parliament, but he regularly tweets flattering sentiments to Russia. But there is a larger story that needs telling--and action.

Lost in the noise was the recent breakage of a mile-long stretch of West Antarctica, due to warmer ocean water. It was part of one of the largest glaciers within the West Antarctic Ice Sheet, which scientists predict will collapse in the next 100 years. NASA caught the images of the event earlier in the week, but the story broke just as Scott Pruitt was confirmed as head of the Environmental Protection Agency--making it seem as if the Earth did the planetary version of a spit take at the news. Timing aside, it was a big deal.

In the distraction of every new development, tweet, or outrage, it’s hard to get a bird’s eye view of what the hell is going on in the literal world. Luckily, Laurie Penny of The Baffler has done that for us, in a brilliant new article that should be required reading for the human race: The Slow Confiscation of Everything: How to think about climate apocalypse. Referencing the daily outrages, legislative battles, and civil division, she writes:

“Racist laws can eventually be overthrown, and even a cultural backslide toward bigotry and nationalism can be slowly, painfully reversed. We don’t get a do-over on climate change. The vested interests agitating to strip the planet for parts know that, too—and they plan to profit from this particular apocalypse as hard as they can.”

In the piece, she eloquently demonstrates that it is no longer the failure of diplomatic relations that is likely to kill us. It’s the man-made weapon that’s already been unleashed in global warming. That missile has already been launched. The point becomes clear: climate change is no longer an environmental issue. It’s a human rights issue--the right to live, and the right to have our children’s children live, too. It is not liberal alarmist drama. It's about life as we know it, and we need to adjust accordingly, or we will soon not recognize it at all.

“Climate change is species collapse by a thousand cuts. There will be no definite moment we can say that yes, today we are fucked, and yesterday we were unfucked. Instead the fuckery increases incrementally year on year, until this is the way the world ends: not with a bang, not with a bonfire, but with the slow and savage confiscation of every little thing that made you human, starting with hope.”

Echoing the storyline of her outstanding dystopian novel, Everything Belongs to the Future, she outlines where we are, how we got here, and shows us the (decreasing) options before us. Importantly, government policy choices are part of what determines which path the human race is really on. The voice of the people and their ability to understand this fatally overlooked reality--and then do something about it, is the ray of hope here. But it’s an attitude adjustment that needs to happen soon. We’re looking at incremental, but preventable, human extinction. We’re all drafted for this war, and really, we’re all ultimately on the same side. The challenge is, can we stop the bleeding in time?

“It is hard to outline the contours of a future you have never been allowed to imagine—one that is both different from today but accessible from it, too. The best we have been permitted to hope for is that the status quo be scraped to the edges of the present for as long as it lasts—a vote to run the knife around the empty jar of neoliberal aspiration and hope there’s enough to cover our asses. If people cannot imagine a future for themselves, all they can measure is what they’ve lost. Those who believe in the future are left, as they always were, with the responsibility of creating it, and that begins with an act of faith—not just that the future will be survivable, but that it might, somehow, maybe, be an exciting place to live.”